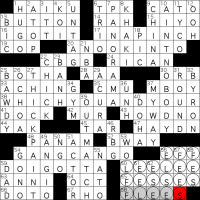 hello and welcome to episode #616 of matt gaffney’s weekly crossword contest, “A Quiet Place”. for this week 3 puzzle, the instructions tell us merely that the answer is 14 letters long. what are the theme answers? well, the three-part description of “the quiet place” in the long across answers is A NOOK INTO / WHICH YOU AND YOUR / GANG CAN GO. that is a weird way to word anything!

i’m not going to lie: my very first, stupidest, thought was that A NOOK might be a reference to ANOUK AIMEE, the french actress of the 1960s best known to me as crosswordese. that, obviously, went nowhere.

my second thought was that “you and your gang” might refer to the letter U and … um … something else. anyway, the idea being that if you had some synonym of “nook”, you might be able to insert U and [something] into it. that also went nowhere.

at this point i had to take a metaphorical step back and look at the big picture, which is to say, the entire grid. for a 15×15 grid with only 9+15+9 letters worth of theme, there sure were a lot of black squares and strange entries: {Wall: Fr.} MUR, {“___ one notice that before?”} HOW’D NO, {Where Tinseltown gets many movie ideas} B’WAY crossing {Sinatra number} MY WAY, {“Ain’t there other choices?”} DO I GOTTA, {___ further (halt)} GO NO crossing GANG CAN GO, and {Patrick who was the U.S. Chess Champion in 1992 and 1995 (sounds like a real animal!)} WOLFF.

the next thing i specifically noticed was {Moroccan city known for its two medinas} FES, which is almost always spelled FEZ. in fact, this whole lower-right corner is made up only of the letters E, F, L, and S: it’s EFF, LEELEE, FESSES, and FLEES crossing ELSE, FEES, FES, EEL, and ESE, plus the aforementioned WOLFF, the only word connecting it to the rest of the grid. that’s unusual in and of itself, since normally you’d build a grid with more flow/connectivity than this when constructing.

but of course, that was the point: not only is this corner just those four letters, but those letters also don’t appear anywhere else in the grid. and in fact, the lack of E’s and S’s surely contributes to the weirdness of the fill in other places; to cite one simple fix, DOTE/ANGIE would be an improvement over DO TO / ANGIO. a slightly broader reworking of that corner could give you DIM/GONE/ANGST crossing INNS/METE instead of DAD/GO NO/ANGIE and ANNI/DO TO.

so what is the meta answer? it’s 14 letters, and definitely has to do with the letters EFLS. ELF ON THE SHELF occurred to me first, but it’s only 13 letters, and also it doesn’t make any sense in context as a “quiet place”. but the actual answer came to me only a short time later: SELF-QUARANTINE, a term that’s been in the news quite a bit these days, and is illustrated here in crossword format. the weird wording of the three-part description is, of course, due to the unusual constraint of not being able to use any of the letters of SELF in addition to the usual symmetry constraint. so anything involving “isolation” or “cut off” is not an option, for example.

so: i got it. i don’t know if i can say that i loved it. the answer itself, while certainly au courant, is a bit of a downer. and the strong constraints imposed on the grid (and the rest of the theme answers) made the solving experience a lot more awkward than usual. i admire matt’s creativity, as always, in his interpretation of this meta, but my own experience of it was not especially joyful. how about you? let’s hear from others in the comments.