AVCX Passover Meta — “The Hunt Is On!” by Matt Gaffney and Aimee Lucido 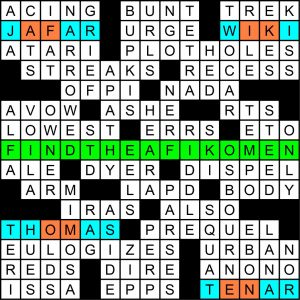 Matt here, doing a quick post of Aimee Lucido’s and my special Passover meta at the AVCX. Solvers were given the beautiful drawing below, created by GAMES Magazine (and New Yorker) legend Robert Leighton, and given these instructions:

The two children at this Seder (see attached drawing) are trying to 40-Across. But you can play 40-Across in this crossword grid, too! In fact, doing so will lead you to the contest answer.

So the hunt is on, and the big hint was the grid-spanning clue at 40-A: [Passover hunt where kids search for a hidden piece of matzoh, which is broken into four pieces in this grid — the contest answer is what the four pieces are hidden in]. That yields FIND THE AFIKOMEN, which is the small piece of broken-off matzoh traditionally hidden for kids to find at a Passover seder. So where is that afikomen hiding?

Well it’s been broken up into four parts: AF/IK/OM/EN, and each of those bigrams can be found in exactly one grid entry:

Let’s look at the letters those pieces of AFIKOMEN are hiding in:

Those spell out JAR WITH A STAR, which is the hiding place of the afikomen and also our meta answer (circled in the drawing below). 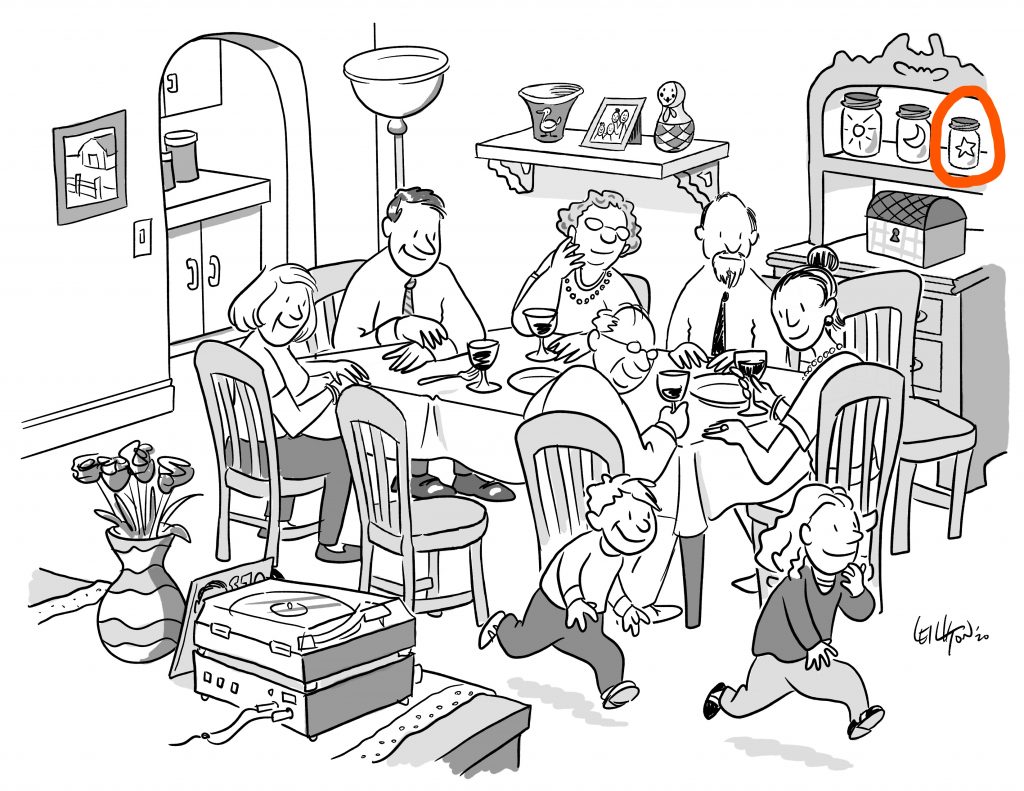 I enjoyed working on this meta quite a lot. Thanks to co-author Aimee Lucido for, in addition to her work on the grid and clues, coming up with the core idea of the meta; to AVCX editor Ben Tausig for shepherding this through and publishing it; and to illustrator and puzzlemaster Robert Leighton, whose work in GAMES et al. I’ve admired since the mid-1980s.

16 Responses to AVCX Passover Meta — “The Hunt Is On!” by Matt Gaffney and Aimee Lucido