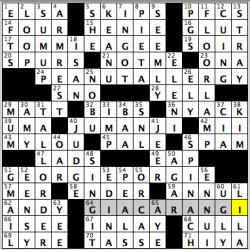 Hello there, everyone. Here is hoping you are doing well to begin the week!

Today’s crossword puzzle features five theme entries, all of which end with a word that has a soft “g” syllable at the end. However, all of those syllables are spelled differently in each of those theme entries.

It actually took me until about a minute or two after finishing the grid until fully understanding the theme of the grid. (Well, it didn’t help things that I started solving immediately and, in turn, did not look at the title.) One can only hope that, after reading the title, that you had this playing in your head as you solved!!

But all in all, far from a TALL ORDER to finish the grid pretty quickly (31D: [“Sizable” task for a Starbucks barista?]). The intersection of Gia Carangi and LILA could have possible played a little tough, as seeing L_LA could make many want to put in “Lola” or “la la” (61D: [Philanthropist/publisher Wallace]). I used to get annoyed at people who did not follow ARMREST etiquette on airplanes, but I just don’t bother myself with it anymore and just make sure I get an aisle seat so I can lean on the one that I know is all mine to lean on and abuse to by heart’s desire (4D: [Comfy chair feature]). In a way, we have food crossings in the Southeast, with SPAM (46A: [Bombard with cyberjunk) and SPINACH (46D: [Leaves in a green smoothie]). Time to break out of here for some grub, but before doing so…

“Sports will make you smarter” moment of the day: SPURS (20A: [San Antonio hoopsters]) – The American Basketball Association, the professional basketball league that existed from 1967-1976, might have had the biggest influence on the current popularity of the National Basketball Association, as the latter adopted a number of the things that made the former popular: a faster pace of play, the three-point shot, and the Slam Dunk contest/All-Star Weekend to name a few. In 1976, the ABA folded and four of its teams merged with the NBA. Of those four teams, the San Antonio Spurs remain the only former ABA team to win an NBA championship, winning titles in 1999, 2003, 2005, 2007 and 2014. (The other three ABA teams to merge were the Indiana Pacers, Denver Nuggets and the New York Nets.) Though now in San Antonio, the Spurs franchise began in the ABA in Dallas, and were known as the Dallas Chaparrals. 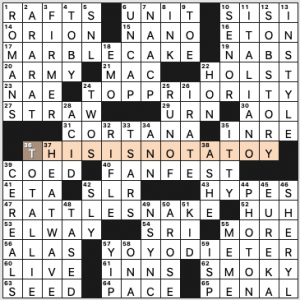 A breezy and quick Tuesday puzzle from a Twin Cities constructor duo. The theme revealer is 36a. [Product warning label appropriate for the answers to the four starred clues], “THIS IS NOT A TOY. The four themers begin with words that are familiar toys, but as expanded into longer words/phrases, definitely not toys.

Fair enough. Four nouns, none of them suitable for child’s play. 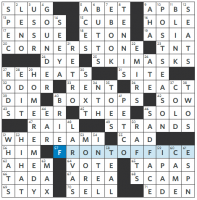 The first word (FRONT) in each of the starred answers in this puzzle is a type of OFFICE: post office, corner office, home office, and box office. Nice! I appreciate how all of these offices are different types / understandings of the word, and they’re all very much of the language. FRONT OFFICE is “A Head for Business,” indeed!

I love that this puzzle highlights the US Post Office, an incredibly important and vital institution in our country (and one of the few institutions referenced by name in the US Constitution!) since it is sadly under attack right now by the currently-presiding government. If you love the Post Office and think its services are vital, make your voice heard (and buy some stamps at the very least)! Also, I implore each person to [Do one’s civic duty] and VOTE, especially if you don’t

But back to the puzzle. I thought it was fun and vibrant. Clues like [Criminal coverups?] for SKI MASKS, [Game of love?] for TENNIS, and [:’-(] for SAD FACE were fun and showed a bit of the constructor’s personality. Also really liked fill like WHERE AM I and the incomparable Julianne MOORE. That’s all for now – hope you’re all doing well and keeping safe/sane. SEE YA! 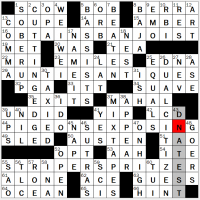 We have a Scrabble related theme for this week’s Jonesin’. Could this also be quarantine-related? Are you playing more board games, too?

You can file these anagram hooks away for your next game of Scrabble! And I am going to assume that this word savvy crowd knows what I am talking about! Can you really enjoy crosswords and not be at least vaguely familiar, if not outright enjoy, playing Scrabble? I don’t think so; the skills are quite similar, although Scrabble doesn’t require knowing many definitions! I think I will challenge someone in my house to a game soon! 4.4 stars today. 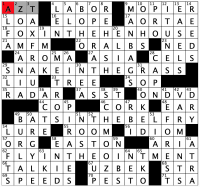 I don’t think I know Seth Geltman, but I do know Jeff Chen! I have worked with him myself, and it looks like Seth had the pleasure of working with him on this 16×15 grid. It is definitely animal related:

Can you think of any more? CAT’S IN THE CRADLE is the only one I can come up with. But I’m tired! Great simple theme, and always fun to have a slightly larger puzzle to wrestle with. 4.3 stars today.