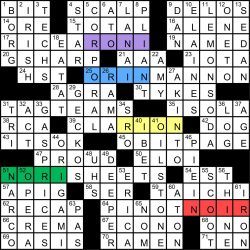 Well, guys. We’re here. It’s Election Day (or Election Week, depending on how soon your state’s ballots are all officially counted). There are not too many people who are not filled with anxiety at the moment. I’m sure many who voted and/or will vote had someone or a group of people in mind when voting, and, as I voted, I had in the mind the countless numbers of American citizens, almost exclusively from marginalized communities, who have been affected by blatantly racist voter suppression going on generations. When I hear so many well-intentioned people plead and urge people to vote, I both agree with them AND also have in the back of my mind those who should have their votes heard but don’t because of voter disenfranchisement and outright cheating to keep Black people — American citizens like you and me — from voting, under the guise of preserving election integrity. Those folks are the ones I could not stop thinking about as my ballot was scanned. Thinking of them at that time, and right now, is keeping the nerves away at the moment. (Well, that, plus what the aggregate polling results going into today. But I won’t get too ahead of myself, of course.)

Anyways, you’re really here for puzzles, right? Well, today’s puzzle is a little bit of a twist, as five theme entries contain the letters IRON consecutively, but in a different order each time and explained in the reveal (61D: [Metal that’s anagrammed in five horizontal answers]).

Not too proud to say that I’ve downed more than my fair share of soft drinks in my life, and seeing LEMON SODA reminds me that I used to drink Sprite like it was going out of style right around high school (11D: [Citrus-flavored pop]). Also, around that time, I was still interested in staged wrestling, and can probably roll off all of the famous TAG TEAMS that I got to watch while I still thought that wrestling was not scripted (31A: [Wrestling twosomes]). I’m leaning towards the British Bulldogs (who came to the ring with a real-life English bulldog named Matilda), the Brain Busters and Demolition were some of favorite tag teams. (Yes, I know I’m losing a whole lot of my audience by this point of the blog.). Let’s talk a little Billy Joel to bring you back, and I bring him up because of first being exposed to ELAINE’S from “Big Shot” before actually going up to the Upper East and crossing the path of the establishment a number of times when a number of my college friends moved to the neighborhood soon after school (10D: [Restaurant in “Manhattan”]). Haven’t seen Manhattan, as I’m not much of a Woody Allen fan to begin with.

“Sports will make you smarter” moment of the day: BORG (1D: [Six-time French Open champion Bjorn]) – Among his 11 career Grand Slam singles championships, Bjorn Borg won four consecutive French Open titles from 1978-1981 and five consecutive Wimbledon titles from 1976-1980. His only hiccup in Grand Slam championship competition was in the United States, where he reached the final of the U.S. Open four times — only to lose in final each time. Two of those losses, in 1976 and 1978, came to Jimmy Connors, while his U.S. Open final losses in 1980 and 1981 came to John McEnroe. 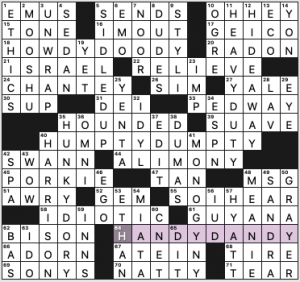 I wasn’t quite making sense of the theme angle till I reached the revealer. 64a. [*Very convenient … or, when read in six parts, a hint to the answers to the starred clues], HANDY DANDY? Ah, there we go. The other themers are two-word phrases whose words start and end with “H and Y” and then “D and Y.” As a bonus, HANDY DANDY is a fun thing to see in a crossword (and it’s so meta—a theme revealer whose gimmick applies to itself as well). Here are the starred answers:

Light theme plus familiar phrases, several of them fun to say. Good choice for a Tuesday puzzle.

Entirely unfamiliar to me: 45a. [Designer dog that crosses a Pomeranian and terrier], PORKIE. Half Pom, half Yorkie, I assume. It looks a little weird to have “pork” in the MOOSHU clue, but there’s no pork involved in this PORKIE.

Probably I knew this, but I didn’t remember it: 62a. [National mammal of the United States], BISON.

Fave fill: PEDWAY, “SO I HEAR,” SIDLED UP. On the hard side for a Tuesday puzzle: IDYL, French literary SWANN, DIT.

THEME: The word BET is hidden in common phrases. 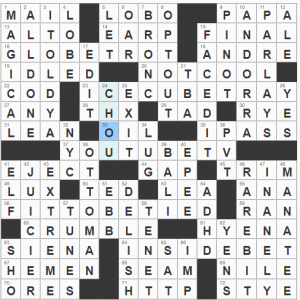 This one is solidly standard fare for Universal. INSIDE BET is a new term for me… is that like an inside joke? I think I played roulette once. Put a chip or two down on red. Lost. Moved on to the slots. Something like that.

I liked FIT TO BE TIED, YOUTUBE TV, and ICE CUBE TRAY (great clue for that one!). GLOBE TROT as a verb feels off. I don’t think one is likely to say “She’s going to GLOBE TROT for a bit.” “She’s quite the GLOBETROTTER!” sounds more in-language.

I’ve heard RARE BIT (or RAREBIT now that I google it) before, but never realized what it was! Fun to find out. 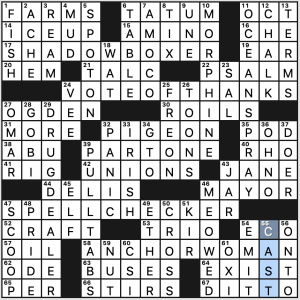 My initial feeling was that there was some inconsistency here in that some of the words seemed to change meaning (especially “anchor” and “spell”) while others didn’t. But then I learned that a VOTE OF THANKS isn’t actually a vote, and shadowboxers don’t actually box against their own shadows, so that placated me enough.

Speaking of actual votes, you’ve cast yours, right? If you haven’t and are still able to, get to it!

Before this day is out, a hit of MORPHINE might be SPOT ON. Anyone know a good DRUG DEALER? OCEAN SPRAY probably isn’t going to cut it. And, um, PULL TABS! (Sorry, couldn’t work it in.) 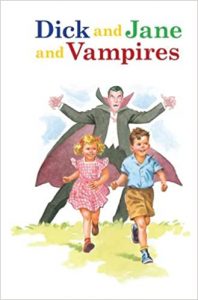 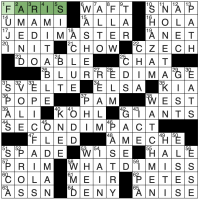 Matt is back! No more rehashing old blog posts this week, and as you would expect, the theme is timely:

Good to know Matt still has it! I’ll bet the break was good for his sanity, as cranking out a puzzle every week for 20 years and the accompanying deadline is quite the feat. But the creative wheels are still going, and I wonder if the seed idea for this puzzle was from a certain musical that was made available to all on Disney+ this past summer? Just a thought! Keep the puzzles coming, Matt! 4.5 stars this week.

There should be another new Jonesin’ next week! 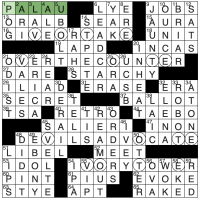 I remember many months ago convincing Debbie to attend the ACPT, and then 2020 happened. In the meantime, I will still enjoy Debbie’s puzzles that I get to blog about, including this quite timely Tuesday edition:

Is there an election somewhere today? I haven’t heard! I won’t drone on too much today, since I will be hunkered down inside watching results like most of you. I am sure there will be some puzzles done during that time as well to keep my sanity! 4.4 stars from me.