Thanksgiving Day is nigh upon us, and here comes a puzzle giving us the go-ahead to indulge…as long as we’re partaking of the ZERO CALORIE (62a, [Dietary info for some treats, and for the starred answers?]) “foods” listed in this grid. Of course, these aren’t actually foods, but food nicknames for people. 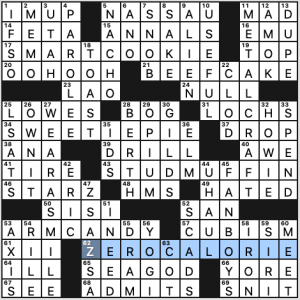 I thought this was fun and lively. I like that all the foods listed are sweet treats as opposed to an entry like WET NOODLE. What are some other food-based sobriquets (sweet or savory) for people?

WEAR A SMILE and METALCRAFT are the marquee long Downs, but I think I like FANBOYS a bit more and PAROLEE gets a great clue [Someone who doesn’t finish a sentence]. ZSA ZSA makes an appearance for you scrabbly types. Have you ever noticed how hard it is to type ZSA ZSA?

The WSJ takes the holiday off, so I won’t be dishing out any posts tomorrow. For those of you partaking in the festivities, have a safe and peaceful Thanksgiving. 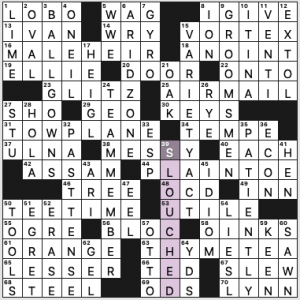 I like the theme idea much better than the execution. The basic concept is taking a two-word phrase or compound word, changing each part to a homophone, and flipping their order, ending up with (ideally) familiar phrases:

Are there other possible pairings that work better than some of these (even if the letter counts don’t fit this theme layout)?

Kind of an odd grid, with eight Down answers of 8 to 10 letters intersecting a theme of 7s and 8s. I like BALLGOWNS (my kingdom for a Billy Porter clue instead of [Concerns for Cinderella and her stepsisters]!), SLOUCHED, and PAST TENSE. ARID ZONE is awfully … arid, isn’t it?

Here’s a performance of the song in 70a. Actress Sissy Spacek did her own singing when she portrayed Loretta Lynn in the movie by the same title. 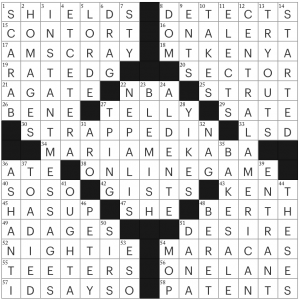 Another cool grid shape! New Yorker is on a streak with these different-looking grids, today’s featuring a pretty segmented design with four corners and a middle section, and two grid-spanning (15s) connecting the N/S on either side. Very visually appealing!

The puzzle features MARIAME KABA, a prison abolitionist and activist, in the central position. It actually took me a couple of tries to find her using google after the solve because I had mentally parsed her name as Maria Mekaba, and then Mariam Ekaba. When I got it right, I realized I had read some of her work in the NYT over the summer re: conversations about defunding/abolishing the police. It’s a powerful piece, and I recommend reading it!  Other women of color featured in this puzzle include Claressa SHIELDS, ASHANTI, Audre LORDE, DANA Davis, and my personal favorite, Peppermint, the first out transgender woman to compete on RuPaul’s Drag Race. As usual, Erik’s puzzle shines from the intentional inclusion of historically underrepresented people. There are a million and one ways to clue SHIELDS, and the choice to use a name that some solvers may not know, and to cross it with completely gettable downs because she deserves to be in a crossword puzzle, is quintessential Agard.

The grid-spanners today are INSTANT MESSAGES [Slacks, e.g.] and CENTRAL AMERICAN [Like Costa Rica], and we also have longer entries STRAPPED IN and ONLINE GAME. Solid stuff!

Overall, all the stars from me. Happy Thanksgiving, everyone! See you Friday. 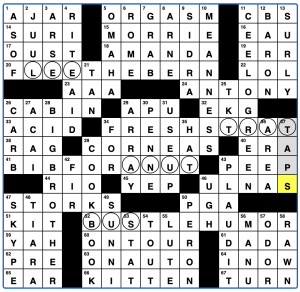 Happy Wednesday!  I hope you’re all staying safe as we prep for an unusual Thanksgiving weekend.  AVCX Editor Ben Tausig has today’s grid, and there’s an appropriately food-y theme:

Each of these answers has a food (EEL, TART, TUNA, SUB) that’s “turned” inside of it, causing it to turn from a more well-known phrase (FEEL THE BERN, FRESH START, Star Wars henchman BIB FORTUNA, and SUBTLE HUMOR) into the zanier answers above.

Giving you the sweet, sweet BIB FORTUNA content you crave. 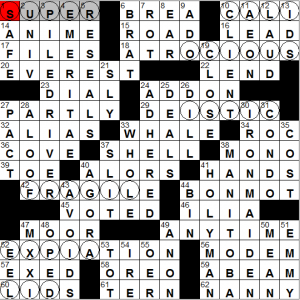 There is a good puzzle in here, but some of the execution baffles me. Admittedly, it already put me off the 1A says [See 62-Across]. The puzzle connects the Mary Poppins phrase “supercalifragilisticexpialidocious” to the TV show (not clued as such) SUPER/NANNY. I can’t fathom why the theme answers are in the order they are, other than construction convenience. As presented, they spell out: “supercaliociousisticfragilexpialid”, which is just goofy. I also feel if your puzzle layout requires you to have MXXI (and crossing EXED), you redesign.

Interesting that MOOR refers to Noyes “The Highwayman” and ROAD to Frost’s “The Road Not Taken”, both poems I associate as High School English staples.