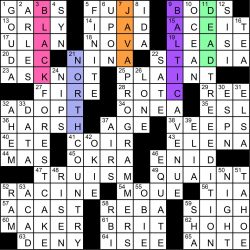 Good day, everyone! Hope you all are doing well and keeping warm as the temperatures keep plunging in most parts of the country.

Today’s puzzle is a pretty enjoyable puzzle, from sea to shining sea! In it, there are five multiple-word long entries, all down, in which the beginnings of them are words that also are the names of actual seas across the world.

Don’t know about you, but am always intrigued when gazing upon a blank screen to start and knowing that all of the theme entries will be long downs. The anticipation was more than worth it after solving. Definitely needed all of the crossings to get COIR, which I did not have an idea that was the name given to the fibers on the shell of the coconut (41A: [Coconut fiber]). Loved the Eurocentric start to the grid in the Northwest, from GOUDA (1D: [Dutch cheese city]) to ARLES (2D: [“A Lane Near ___” (Van Gogh painting)]) to ORLY, with the first theme entry referring to a German dessert anchoring the area (13A: [Airport near Paris]). Very cute clue for ADOPT, though seeing this will not help my recent addiction of seeing videos of pit bulls in the “Pittie Nation” section of The Dodo Facebook page (32A: [Finalize a “pet” project?]). Seriously, this addiction is bad! I’ll get my mind off of them for now by thinking of some real fun music acts mentioned today, such as the clue to REE (29A: [“You Gotta Be” singer Des’__]) and NINA, who is an absolute showstopper (21A: [Singer Simone, aha “The High Priestess of Soul”]).

“Sports will make you smarter” moment of the day: MAKER (60A: [Constructive one]) – Just a few months ago, current Howard University freshman and men’s basketball player Makur Maker made waves by becoming the first five-star recruit (ranking out of five stars) to decide to commit to a Historically Black College and University out of high school. Shunning the overtures of traditional college basketball powers such as Kentucky and UCLA, Maker, when announcing his decision in July, tweeted, “I need to make the HBCU movement real so that others will follow.” The seven-footer, who born in Kenya to Sudanese parents and who grew up in Australia after his parents immigrated there, currently is sidelined with a groin injury, but we definitely hope he returns to full health soon and makes an impact with his game and the perception of HBCUs across the country. His cousin, Thon Maker, was drafted by the Milwaukee Bucks with the 10th overall selection of the 2016 NBA Draft and has played in 255 career regular-season games. 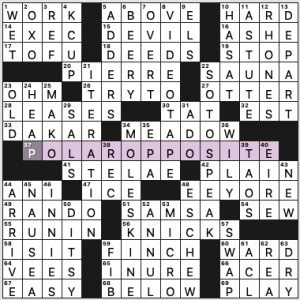 The (impressively long) byline was unfamiliar to me, but the constructor’s had a number of puzzles published this year (AV Club, Universal, other people’s blogs, his own site). Clearly he’s got skills, as this puzzle has 12 short themers around the periphery, a central revealer, and mostly good/smooth fill. (The exception: STELAE, which feels like crosswordese that’s too hard for many newbies tackling Tuesdays.)

The revealer is 37a. [One totally unlike another … or what each answer on the edge of this puzzle has?], POLAR OPPOSITE. There are six pairs of same-length words that are both opposite in meaning and polar opposites in terms of their placement in the grid: 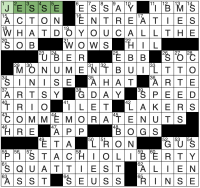 We have a riddle for the theme today. The title, “Shell Game,” is sufficiently vague!

I actually got quite stuck on the SW corner; I couldn’t figure out the pun at first. The entry at 61A (See below!) is also a word I am not too familiar with, although it sounds like something I would say! There are a few obscure pop culture references this week, at least to me, so this is a trademark Jonesin’ this week! 4.4 stars this week. 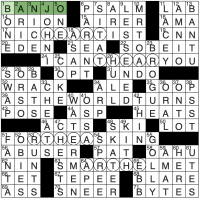 Today’s puzzle has an elegantly executed theme. All possibilities were found, and the revealer at 39A wraps it all together:

See what I mean? All of the cycles in the word EARTH except for the root word are hidden in the circled squares. Nice and tidy. And nice and easy! Under three minutes for me. 4.5 stars today.

IT’S A CIRCUS (56a, [Reaction to a frenzied scene, and what could be said of the beginnings of the starred answers]) is the revealer today, indicating that the other theme answers all begin with a word that can precede “circus.” 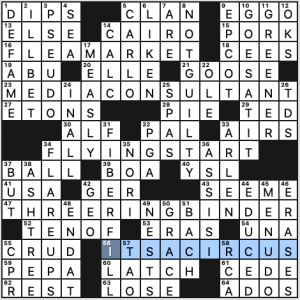 I’m not sure how “in the language” IT’S A CIRCUS really is, but I enjoyed the theme nonetheless since all the other phrases are solid. I discovered Monty Python in my formative years, so if you’re going to have a reference—even an oblique one like 34a—in your theme, then I am so there for that.

In the fill, FIBER FILL is appropriately meh, but I like NOT GUILTY, GOES AT IT, timely FLARE-UPS, MEASLY, and ASH TREE (though I’m not sold on that clue [Where many bats originate]).

This one may cause your hair to stand up.

THEME: Types of hair-dos can be found in common phrases reading upwards. 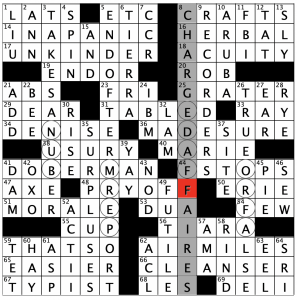 Just gonna check to see if Universal started publishing grids with circles in them when they should be required… fingers crossed… and NOPE!

So instead, solvers who do not have access to this site, and therefore cannot see the grid as it was intended in Acrosslite, are being asked to count letters backwards. I don’t get it. I was told many months ago that a fix was on the horizon. Why is Andrews McMeel so hesitant to invest in software that can accomodate? Every other major publisher is light years ahead. In fact, in WaPo’s applet, we were able to write in the black squares not too long ago! The NYT applet sometimes features animations upon completion!

I can’t help but feel that Stella’s excellent grid is going to leave a poor taste in novice solvers’ mouths if they can’t interpret the “workaround” to circles.

Anyway, while I’ve seen hidden hair dos a couple of times, I still enjoyed the heck out of this one. Excellent longer entries and new things to add to the vocab such as CHARGE D’AFFAIRES. While I’ve never called it an END OF TERM REPORT in 14 or so years of teaching, I like the classiness that it has in comparison with REPORT CARD (and let’s face it… there is no “card” being mailed home anymore!)

I’m not quite sure why 4D [Go in circles?] SPIN required a ? in the clue, and I’m still always surprised that Universal feels it necessary to clue AXE with (var.) since that’s how I feel like I see it most commonly (but maybe that’s just from doing crosswords? I dunno).

Really liked everything overall here. Glad I solved in Acrosslite.