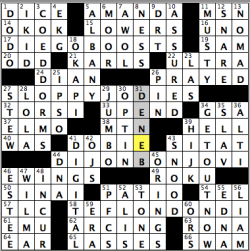 Good day, everybody! Wishing you all the best at the beginning of the new year, and I hope you all had a safe time in ushering in 2021 and/or kicking 2020 to the curb!

Though I mentioned it in last week’s write-up, Liz’s 500th puzzle made sure to focus on the holiday season and get solvers in the Yuletide spirit, as she so often does with her holiday-themed puzzles. Today’s puzzle marks Crossword Nation puzzle No. 501, or DI in Roman numerals, and each of the theme entries are well-known phrases and/or nouns that are turned into puns when adding the letters “DI” in them.

Initially got my nitwits mixed up, putting in “dolt” for DODO at the beginning which slowed me up from the start (1D: [Nitwit]). Other than that, a smooth sail, and I liked the girl power all over the grid, from real-life trail blazers such as DIAN (24A: [Primatologist Fossey]) to fictional icons like WILMA (47D: [“The Flintstones” character]) and more. Will leave you with DOBIE and his legendary song, and seeing the video (embedded below) definitely makes you think that they don’t make music videos like these anymore (41A: [“Drift Away” singer Gray])! I dream to pull off that look with the shirt and afro, let alone aspire to have a voice like he did!

“Sports will make you smarter” moment of the day: JUMBO (29D: [Shrimp variety (ironically)]) – One of the greatest comebacks in NFL history, dubbed the “Monday Night Miracle,” was punctuated by one of the most unlikely of touchdown catches in league history. On Oct. 23, 2000, the New York Jets came back from being down 30-7 to start the fourth quarter against the Miami Dolphins, tying the game at 37 with 42 seconds remaining in regulation on a 3-yard touchdown catch by 308-pound offensive lineman John “Jumbo” Elliott, who juggled the ball a couple of times before securing it on the way to the ground. New York would then win the game on a field goal in overtime, 40-37. Elliott, who played his entire 14-year career in the New York Metropolitan Area with either the Jets or New York Giants after a standout college career at the University of Michigan, won a Super Bowl (XXV) and made a Pro Bowl (1993) during his time with Big Blue. Elliott was inducted into the College Football Hall of Fame in 2000.

You’d be forgiven for thinking that a revealer of FOUR CORNERS means that something is going on in the corners of the grid. But that’s not the case here. The clue [Landmark in the Southwest, and collective description of the beginnings of 18-, 24-, 39- and 51-Across] tells us to look to those long theme answers where we find that the beginning words can each follow the word “corner.” 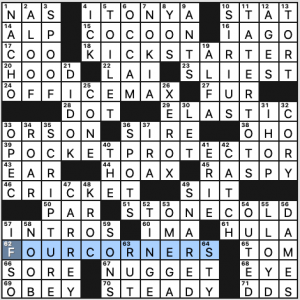 A really nice set. I especially like the something old in POCKET PROTECTOR and something new in KICKSTARTER.

The X in OFFICE MAX is handled nicely by kicking of the name XEROX. Elsewhere, TATER TOTS and SCRIPTURE anchor those NE and SW corners, and I enjoyed seeing CRICKET (the game). My elderly neighbor used to try to explain the game to me on our daily walks, but I could never wrap my head around it.

I did not know the name LAI [“Love Story” composer Francis]. If I had to clue this name I would definitely include that he won the Oscar for that score. Usually this name gets the clue [China’s Chou En-___] or [Medieval French poem] or [Vietnam’s My ___] (site of a massacre). None of them is good for crosswords, in my opinion, meaning I’d avoid that word if at all possible.

A fine example of a word-following-another-word theme. 3.7 stars. 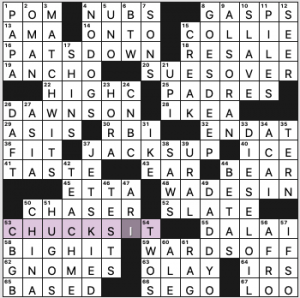 The theme takes people whose first names double as verbs, puts those verbs in verb phrases with prepositions, adverbs, or (the outlier) a pronoun/noun. Each phrase is then clued as if it’s a two-word sentence starting with [name]’S:

If the theme is just “[name]’s [small word],” I wish there had been more small-word variety so CHUCK’S IT didn’t feel like an outlier.

I hope there are people who get CNBC and CBGB mixed up.

I don’t think many newbies have heard of the TERN ([Relative of a sea gull]), so that’s an entry I prefer not to see in Monday/Tuesday puzzles.

Matt Jones’s Jonesin’ Crossword, “Must Be ’21 to Enter” – Derek’s write-up 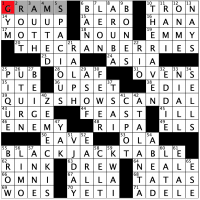 Did I miss any? I hope not. Curious to see how Matt treats 2022! This was nicely done. There is also the group Twenty-One Pilots, right? Maybe with more digging this could have been a Sunday-size puzzle! Just kidding. Fine job again, Matt! 4.4 stars. 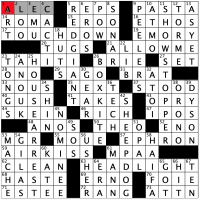 I tried to race through this one. Under 3 minutes! Some of you have finished an easier puzzle under 2 minutes; I don’t know how they do it. I just cannot type that fast! Our theme revealer is at 63A:

So we are playing on the phrases light touch, light show, light house and light box. It all works. I have learned more about lighting in the Zoom era than I have ever had to know, so in that sense this theme is quite timely! 4.2 stars. 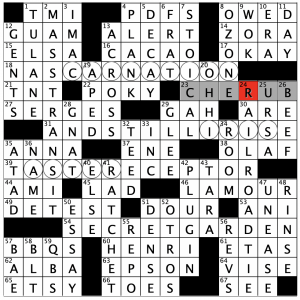 Excellent finds all around. Solid, colorful base phrases and all of the flowers bridge parts of the answer. This is a rather perfectly executed hidden word theme, imo. I don’t think it suffers much from a lack of circles (I’m assuming Universal is still running circle-less grids in its mass publications- haven’t checked as of the new year). In fact, I’d probably have more fun finding them on my own without the circles.

New for me was “The POKY Little Puppy.” Say what? That’s a thing?! Oh yeah… look at that. Billed as the best selling picture book of all time. I musta missed it in my misspent youth.

One nit in the fill- the clue for 53A [36-Down with “Danielle”] for ANI is one of the (perhaps is the) most awkward and strange cross reference. Ironically, I found it so weird that I enjoyed it.