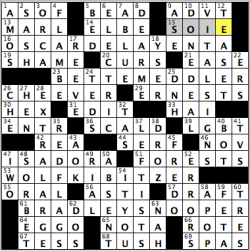 Good day, everybody! Hope all is well with you and that you’re continuing to stay safe.

Definitely had to fight at the end to complete this puzzle, as it took way longer than it should have to recognize D-NH (25D: [Pol. designation for Sen. Jeanne Shaheen of the Granite State]). Wanted to make “DNC” fit over and over and, for some reason, just ignored the “Granite State” mention. No excuses since I pride myself in putting all the senators of each state to memory. Also, Shaheen just spoke on the Senate floor soon after the coup attempt in Washington, DC…and had her phone blow up at the end of her time speaking. Fitting to see a reference to a Democratic legislator and LEFTISTS in the same grid (37D: [Liberal-leaning group, perhaps]). Liked seeing the two 10-letter non- themed entries in the grid, with VITAL SIGNS being the standout of the two (11D: [Your pulse and your body temperature, e.g.]). This blog is far from a DONE DEAL for today, but getting ready to skedaddle now (10D: [Completed transaction]). But before heading off…

“Sports will make you smarter” moment of the day: CHEEVER (26A: [“Falconer” author John]) – Time to head to the race track and talked about one of the more well-traveled Americans in racing. Former Formula One and Indy Car/CART driver Eddie Cheever has the record for the most starts in Formula One Grand Prix by an American, with 132 starts between 1978 and 1989. Though he never won a Formula One race, he did end up winning “The Greatest Spectacle in Racing,” as he won the Indianapolis 500 in 1998 for Team Cheever, making him the winning driver and owner. 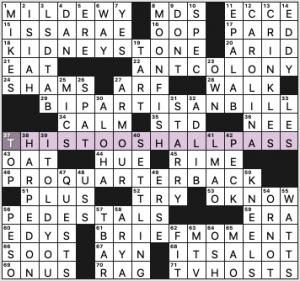 Theme is solid, except for that PRO bit.

I spotted a few things that felt wildly out of place in a Tuesday puzzle that’s supposed to be suitable for beginning NYT solvers: ECCE, STD., RIME, EDY’S (not sold in the Western U.S.), ERSE. And “OK, NOW” is just plain weird, isn’t it? EPA LAB feels maybe contrived, and LSD TAB doesn’t feel markedly better. The grid would have more breathing room if the NYT used titles for daily puzzles and “This Too Shall Pass” were extricated from the grid. 66 theme squares in a Tuesday just isn’t a great idea. 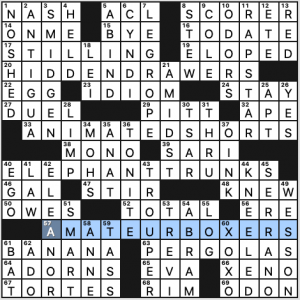 I think I smiled when I finished the solve and realized what the theme was. I like the thought of the serious and sober Wall Street Journal having a puzzle about underwear.

There’s a huge range of different terms for underwear but there probably aren’t any phrases that incorporate alternate meanings of “panties,” “thongs,” or “bikinis.” Hipster is a style of underwear and “hipster doofus” (popularized by Seinfeld, I believe) could potentially work, but it puts the underwear word at the beginning, unlike the other phrases.

Fill highlights include SMIDGEN, ANTIGUA, PERGOLAS, SERRANO peppers, a surfer’s LEG ROPE, and a super TROUPER. I’m still looking askance at STILLING [Calming down] which looks unusual in that form. And count me as not a fan of OD ON.

A lighthearted and fun theme coupled with strong fill. 3.75 stars. 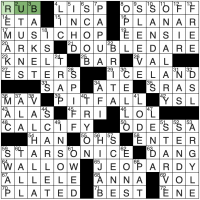 Talk about a timely puzzle! Alex Trebek’s last episode of Jeopardy! which was originally scheduled for Christmas day was pushed back to this past week, and the final tearful episode was just this past Friday. Yes, I shed a tear. I hope to make it on the show one day, and it will be bittersweet since the host will be someone different. The theme entries reference some of Alex’s earlier, more obscure work, and thus HE is the Obscure Pop Culture Reference of the Week!

What, no High Rollers? That is the show I remember watching when I was 8 or 9. Man, he will be missed. He was so great at that show! But Ken Jennings did an amazing job on Monday, and I think the show will be fine. Curious as to what you guys thought of Ken’s debut. And who should be the new host? A truly nice tribute to Alex for this week’s Jonesin’. A solid 5 stars!

I’ll stop there before any more tears are shed! 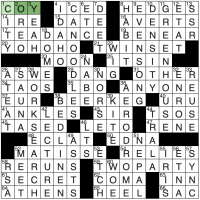 Tea party, dance party, you get the idea. Nicely done. Very nicely done; this puzzle makes me want to make more puzzles! I am impressed by the fairly wide-open NE and SW corners, and filled with decent entries too. Good job, Paul! 4.3 stars from me.

Everyone have a safe and healthy week. If you’re doing the MIT Mystery Hunt (as I am!), get some sleep now!