We got trouble right here in Crossword City. That’s trouble that starts with a T that rhymes with P that stands for…pool! All the theme entries contain terms heard around a pool table. 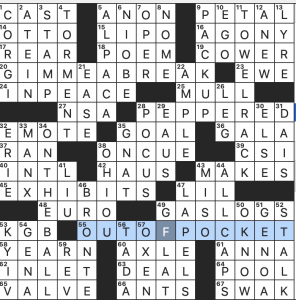 Solid (sorry), consistent, accessible Monday theme that was enjoyable to solve. Nice! Pretty much what I’ve come to expect from Barbara Lin’s puzzles.

What I didn’t know before I did this puzzle: that element 41 was named after NIOBE. 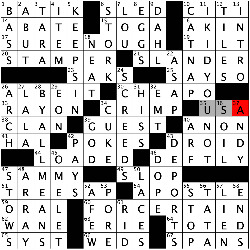 This one feels so straightforward it doesn’t even belong in the Los Angeles Times on Monday — more like Newsday. Not much to explain — all four theme answers are clued as [“Really!”] and each theme answer is something that you might mean if you say “Really!” Like so:

As you’d expect from someone who’s been doing this as long as Fred Piscop has, the fill is super smooth and easy — and it’s no mean feat to fill a puzzle to make it this easy, so I’ll give him that. I just wasn’t grabbed by the theme at all, and I do wish there’d been more women represented in the grid. How about Sophie DAHL instead of the ever-present Roald? Or LA LA Anthony? If those are too hard for Monday, surely there’s a TARA to choose from between Reid, Lipinski, Parker-Pope, or a fictional character without returning to the Gone With the Wind well again. (Don’t hate me, progressive friends, for I do love that novel very much — but I would also love to see other ways to clue that name.) 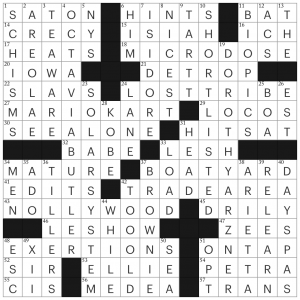 This solve was a comedy of errors on my part. There were a bunch of places where I tried to guess based on a few letters, sometimes with hilarious results, detailed below. I really like the long entries today, but there were just a few places where the clues and/or entries didn’t work for me, so although some parts of this puzzle were pretty snazzy, overall, it wasn’t my favorite.

Starting with the good (long) stuff: We have OCTAVIA BUTLER and DOROTHY ARZNER in the long down positions, as well as SOLAR SYSTEM and SHORT-LISTED. These are all great! I had never heard of DORTHY ARZNER (uncultured brute that I am), so some of the letters in her last name gave me a hard time, but with a little creative googling I got there eventually. Other nice longer entries include MICRODOSE, LOST TRIBE, MARIOKART, BOATYARD, NOLLYWOOD, EXERTIONS. Nice, crunchy, fun entries.

During the solve, I made a bunch of confident and dead wrong guesses throughout, starting with [First science-fiction author to receive a MacArthur “genius” grant] as URSULA K LEGUIN instead of OCTAVIA BUTLER, entered with no crosses (maybe file away for the future the fact that these two authors have names of the same length because, uh, that seems like a good thing to know if you intend to solve puzzles I wrote in the future…! (this is not a Boswords spoiler)). Other completely incorrect guesses include:

That last one was the error that lingered after my solve, until I finally wrapped my head around DRILY, which….is not spelled like that in American English, but makes about as much sense as DAILY (some people get DAILY jokes delivered in their email, right?).

Now for the not-so-great: The biggest issue, to me, is the casual reference to phrenology without any indication that it’s a deeply racist pseudoscience in the clue [Phrenologist’s interest] for HEAD. This seems like a serious oversight. Also irritating, during the solve, was DE TROP without any indication that it’s French. I mean, maybe some people say this without a trace of irony in English, but… those people are DE TROP ?. I also think calling CIS and TRANS “opposites” in their cross-referenced clue is not quite right. Gender isn’t a linear spectrum with CIS and TRANS on the poles—it’s vastly more complicated than that, for many people—so this angle didn’t really work for me. Finally, the clue for NICEST doesn’t totally click either. I get that a “nice point” can be a “precise distinction” but I’m not sure that works in the superlative form.

YOUR / INNER / FISH is today’s theme (36a, [With 37- and 39-Across, book and TV series on human evolution, and a hint to the circled letters]). I don’t know this PBS show based on evolutionary biology, but leave it to the Head of Science and Innovation at the British Consulate General in Chicago, to come up with a good science-based theme. The other theme answers have fish hidden within well-known phrases. 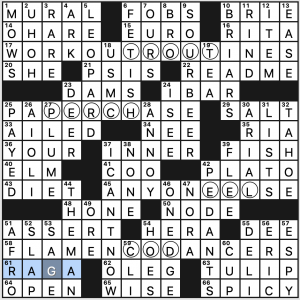 This is a really good example of a hidden word theme. It’s generally better when each word is different, and we have not one, but two solid bases for the theme: the revealer and the title. The longer hidden words are more interesting of course, but all the base phrases are good here.

I got hung up in that SW corner. 53d is clued [Exhibiting good judgment], and I was stuck on either SANE or possibly SAFE (as opposed to the correct SAGE). The crosser is [Music for a sitar] and I tend to forget the meaning of RAGA, so RANA seemed perfectly plausible (probably because I was conflating it with “Rani”). Further complicating things was that I didn’t know the Taylor Swift song next door [Taylor Swift song that takes a swipe at sexism]. Was it THE MAN or THE MEN? (Turned out to be the former.) Anyway, being a Monday, if 53d had a straightforward herbal clue, that would’ve made that corner much simpler.

Aside from that hang-up, this was a nice, smooth grid with an enjoyable theme. 3.9 stars. 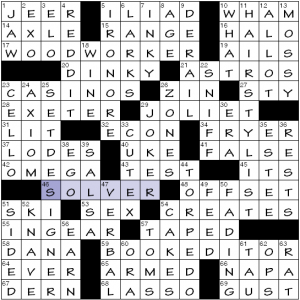 Not sure I understand the theme 100%, but it seems simply to be occupations with clues employing the verb makes as part of an idiom, which is taken literally.

annnnd…  Time for me to make tracks.

I struggled a bit with this one. Of course, it’s yet another day of slippery driving in the snow and I solved this over lunch while fielding phone calls, so maybe it was me. I did enjoy the struggle as I almost always do with Brendan’s puzzles. 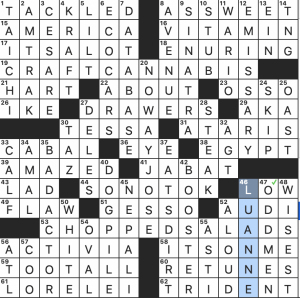 What I didn’t know before I did this puzzle: never heard of CRAFT CANNABIS before. Also did not know that Peggy on “King of the Hill” has a niece named LUANNE or that Ralph Waldo Emerson said that AMERICA was “another name for opportunity.”