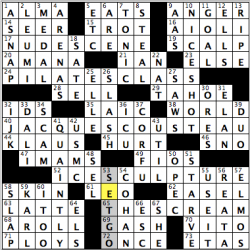 Good day, everyone! March is here just like that! Here is hoping you are well, especially in the past 12 months since there will be a lot of reminders that you’ll come across about last March being the month when the gravity of COVID-19 really starting to take a grip in the United States. Again, here is hoping you are all doing your best to stay safe and keep others safe with your actions. Also, for those who have lost loved ones as a result of the pandemic (as well as those whose passings were not COVID-related), my sincere condolences to you and your families.

Today’s grid is about hidden getaways, in a way. The five long theme entries, all going across, feature multiple-word entries in which the letters “e-s-c” span between the two words. We also have ESC in the grid, acting as the reveal (66D: [Puzzle theme that’s hidden in the five answers]).

It is a good thing that AMANA (20A: [Microwave brand]) is a pretty common word seen in crosswords, or that couple with the crossing of LEUMI could have been a tricky one to navigate (2D: [Israel’s Bank ___). If Surrealism floats your boat more than the Expressionism mentioned in the bottommost theme entry, then DALI would be right down your alley (33D: [Surrealist Salvador]). Hesitated a little in putting in NICE SHOT, as I was deciding on whether the first word would be “good” or what it eventually turned out to be (10D: [Compliment from a tennis opponent]). Here is hoping that I was not the only person who pit in “riata” first before REATA, as that is definitely an entry that reminded me again to wait before plopping down what version it will be (56D: [Lasso]). I was going to start the next graph with STEAL and mention how the number of stolen bases in a season throughout Major League Baseball in 2017 was over 1,000 stolen bases fewer than in 1987 (8D: [Baserunner’s feat]). But then something else caught my attention, which made me think of a sporting event I saw in sixth grade that made me run around my apartment like an unhinged brat on an insane sugar rush…

“Sports will make you smarter” moment of the day: SLASH (26D: [Cut sharply, as prices]) – In the mid-to-late 1990s, one of the more dynamic players in the National Football League was Pittsburgh Steelers quarterback Kordell Stewart, who earned the nickname of “Slash” because he played a number of positions on the field (QB/RB/WR) and generated big plays from each of those positions.  Though he played this all-purpose, jack-of-all-trades role for the first few years of his NFL career, Stewart did eventually become the full-time starting quarterback of the Steelers, making the Pro Bowl in 2001 after throwing for over 3,000 yards and rushing for over 500 yards in leading Pittsburgh to the AFC Championship Game before losing to the New England Patriots. For all his professional exploits, Stewart, who played collegiately at the University of Colorado, is most remembered for one of the greatest college football plays in history; Stewart’s Hail Mary pass at the end of a Sept. 24, 1994 game against Michigan, which traveled over 70 yards in the air, was caught by Michael Westbrook for a game-ending touchdown and give the Buffaloes an improbable 27-26 victory. The play and game is known as “The Miracle at Michigan.” Avert your eyes, Wolverines fans. (Sorry, Derek!) 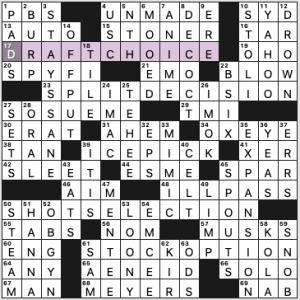 I don’t quite get this theme. “Familiar” phrases that end with words synonymous with choice are clued with specific reference to a food or drink:

Odd theme. Two liquors clues and ice for liquor, one drinkable broth, and then a total outlier of a non-liquid banana split and its toppings, which are sort of ancillary to the split. I wanted to love this puzzle because I so enjoyed seeing Ross’s ROSS – DRESS FOR FEWER T-shirt on Twitch (Googling tells me his Twitch streaming partner Parker Higgins made the shirt). I may need to get one of those shirts mainly to wear to Ross Dress for Less (which I call Ross Dross for Loss).

Besides the theme not resonating for me, there were some “Wait, what’s this doing in a Tuesday puzzle?!” bits, like DECOCT, SPY-FI (honestly not sure I’ve seen this outside of crosswords), OFF-PUT (no, you are put off by something that’s off-putting, and I believe Merriam-Webster agrees with me), TEHEE (where outside of crosswords is that a thing?), the KOLA nut, and I-wish-I-could-swear-it-isn’t-used-in-real-life-but-unfortunately-it-is MENTEE.

Three stars from me. I’ll like the next one better.

This is a particularly nice example of the word-following-another-word theme type. I found a similar example in the Cruciverb database, but I’m partial to this one for its fun entries. 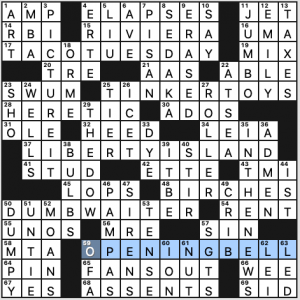 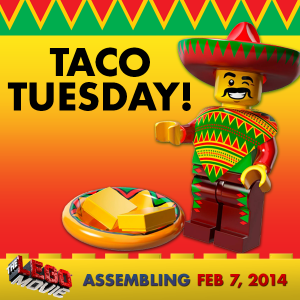 Like I said, fun entries, both the entries in the grid and the “bell” phrases.

Moving on to the fill, everything is awesome with PICTURE IT, IN THE NEWS, THE DOW, HERETIC, RIVIERA, FANS OUT, JUMBO, and DUMPY. I could have done without crosswordese ERTE and a trio of partials (OF A, IT BE, OR ME), but honestly, I barely noticed them since I was enjoying the solve.

Matt Jones’s Jonesin’ Crossword, “All Over the Place” – Derek’s write-up 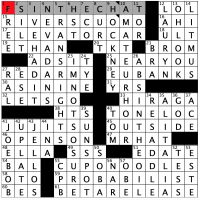 OK, I found this one tough. So either I go to my old standby excuse of needing more sleep, or this was simply a tough Jonesin’ puzzle! There isn’t even that much obscure pop culture in this one, but what there is, I had NO clue what they were! (See below.) Enjoyable solve, though, as is expected with a Jonesin’ puzzle. And I can proudly say I learned several things after solving this puzzle! 4.9 stars today.

I could go on, but I will stop there. Another Jonesin’ next week! 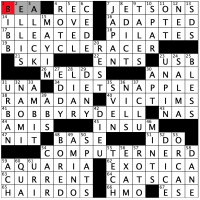 I love Jeffrey Wechsler puzzles! What do we have for this edition?

I highlighted this hidden computer brands in red, since I AM a 54-Across! I wish I know more about programming; perhaps I will take that up when I retire as a hobby! This is a smooth puzzle, especially considering the wide-open corners in this one. Great job, Jeffrey! 4.6 stars from me.

Wow! The wackiness continues in Universal! Loving the risks David is taking with publishing curveballs since coming back from January’s respite.

THEME: Phrases that have SEA in them must be read carefully going down! The solver has to note that SEA is on the “side” of the entry. 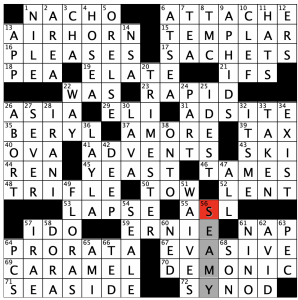 Outstanding puzzle! Though I confess it’s one of those that I didn’t see until post solve. However, the mystique after failing to interpret the initial theme clue held strong and kept me engaged, wanting to see the theme reveal itself. It was a really nice AHA moment to find those phrases, which were very well hidden. Well, maybe CHA isn’t the best stand-alone entry in a puzzle, but it’s certainly a well established piece of Crosswordese (usually clued punnily as one half of a dance or something…).

More importantly, I really am thoroughly enjoying the puzzles that have been featured since Universal came back from hiatus. I hope this isn’t a fluke! I think quirky themes like this in a puzzle like Universal are an excellent way to engage newer solvers and help shove them down a crossword solving rabbit hole from which they’ll never escape (heck, I’m still there after about 30 years).

A rare 5 stars from me today. That’s the second 5 star rating I’ve given in a weekI think!