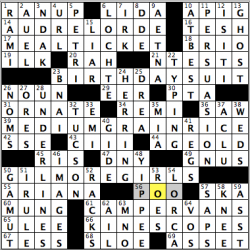 Crossword Nation puzzle solution, Week 517: “This is Our Happy Place”

Hello there, everybody! Here is hoping that you are doing well as we turn April showers into May flowers!

If in the event this puzzle left you feeling happy, there’s definitely a reason. Of course, the main reason is because it’s you got to enjoy another wonderful Liz Gorski creation! The second is because, in this particular grid, five theme entries begin with words that can come immediately after the word “happy.”

So glad that an extra couple of squares were left in the construction to allow the stacked 10-letter entries so we can enjoy AUDRE LORDE (14A: [“Black Mother Woman” poet]) and the AGE-OLD (44A: [Ancient]) KINESCOPES that dominated television and film of yesteryear (66A: [Motion pictures made from picture tube images]). Also had a couple of 10s running down, and, for some reason, was initially thinking something related to an actual highlighter when reading the clue for UNDERLINES (28D: [Highlights text with horizontal markings]). Definitely was not familiar with GIDE, and probably the only entry that I was not familiar with at all going into the solve (40D: [“The Immoralist” author Andre]). More familiar was the person referenced in the clue to VOS, as I’m pretty sure I first saw her as a guest in a late night talk show while staying up when I was five and talking about the smartest people (64D: [Columnist Marilyn ___ Savant]). And to have “savant” as a last name to boot?!?!?

As much as many people bemoan the number of public figures who come across as scripted and cautious with their behavior when the media is present and microphones are on, that was not a problem with one of the most honest and candid coaches in sports history, former New Orleans Saints and Indianapolis Colts head coach Jim Mora. Despite winning 125 games as head coach in the NFL and leaving two franchises in much better shape than when he first came to the Big Easy and Indy, Mora is known for his postgame rants/meltdowns. Though not his most famous tirade, the rant below, which occurred in what turned out to be his last game in charge of the Saints in 1996, certainly will elicit a few chuckles…especially when “poo” is part of the rant! This is what I would probably say to myself after trying to solve a Puzzle 5 at the ACPT.

Our theme is TREETOPS (40d, [Places with bird’s-eye views, and what the starred answers have]). The other theme answers (all in the Down direction) are phrases that have a tree at the beginning not clued as a tree. 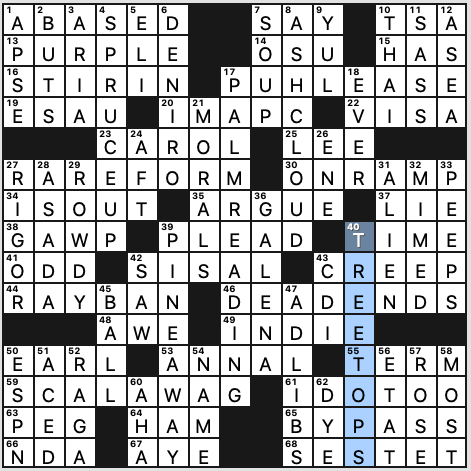 Nicely done. I like all these. Can you think of other trees that have non-tree meaning (not counting fruit and nut trees)? I can think of gum and elder trees.

Beautiful fill today, as well. See RARE FORM, DEAD ENDS, SCALAWAG, and PUHLEASE. The one sticking point I see is the crossing of GALENA [Lead ore] and SISAL [Fiber used in ropes and rugs]. That’s some fairly hardcore crosswordese there for a Tuesday. I’M A PC is rather stale these days, and IS OUT is awkward. 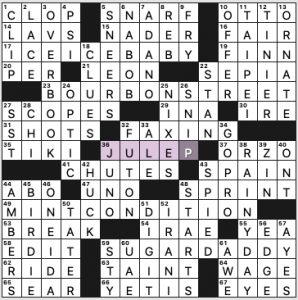 The Kentucky Derby (disclaimer: the horse racing industry is brutal to horses) is this weekend, and the classic Derby cocktail anchors this theme. JULEP is clued 36a. [Libation made from the beginnings of 17-, 23-, 49- and 59-Across], and waaaait a minute here, it’s a mint julep, that is it’s name. The four themers start with mint julep ingredients:

Fave fill: RAINY DAY, OVERBOOK, and AMBERS even though the plural feels a little specious to me, just because I dusted my amber egg today and I have warm feelings towards amber.

My EYES caught some entries that feel out of place in a Tuesday puzzle, particularly ADANO, IRAE, IRANI, and SST. Also, if you’re gonna have IRE and crosswordese IRAE in the same puzzle, both cognates connected to the Latin for “wrath,” well, you could clue IRE as an abbreviation for Ireland and dodge the dupe. 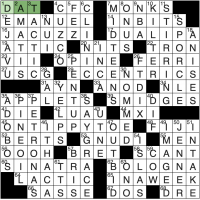 I hate drug company commercials. I am thinking Matt does too!

All of these themers do kinda sound like a name of a pharmaceutical drug. I read a while ago that these companies go through great lengths to make sure these stupid made up names are offensive in some other language. How would you know? You could only check a certain number of them. I also read that the Brits, when watching the Oprah interview with Meghan Markle, were laughing at us for having these ads! “You tell your doctor what drugs to use?” was a common response. I can’t say I disagree! Matt, this puzzle got me riled up! 4.6 stars.

Did you know you can download the Jonesin’ puzzle, along with many others, straight from the Xword solving app? There are many there, including Erik Agard’s USA Today puzzles. Just so you know!

That is all! Another Jonesin’ coming next week. 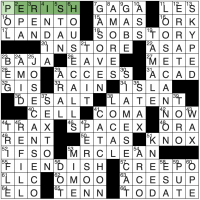 This is another theme that took me a minute to find. But the revealer at 63-Across helps!

Clever! If you notice, the hidden ACES is indeed heading “upwards” in each down entry, and each one spans two words in the same manner. A tight execution of a theme idea. Well done! 4.4 stars from me. 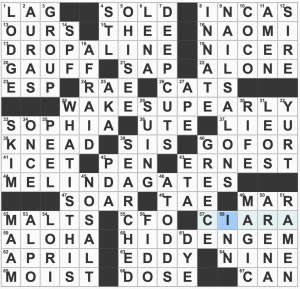 Delightful collaboration today! Often, this genre of theme employs circles to highlight the secret word, but that wouldn’t make it very “HIDDEN” now would it? A lot more fun to find it on my own and a little AHA moment when uncovering the revealer.

Fantastic fill in this one with lots of freshness, especially in the names department. A lot of names were new to me (though I’m embarrassed to say that… I know I should be more familiar with them). A testament to the cluing and construction that none of them were hangups. Those included COCO GAUFF appropriately crossing NAOMI Osaka, LENA Waithe, LORI Harvey,  CIARA and (the mosque) Hagia SOPHIA. Women represent in this one!