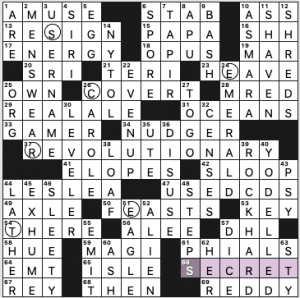 What a cool theme. Find words that become their rough opposites when you add a letter, and put them in a symmetrical layout where the added letters spell out SECRET? I like it. There are other entries here that become other words if you remove a letter, but the opposite of SLOOP is neither LOOP nor SLOP, so they’re irrelevant.

The revealer is 66a. [When revealed in this puzzle, it reverses the meanings of the answers to the starred clues], SECRET. Here are those themers:

What else caught my eye? 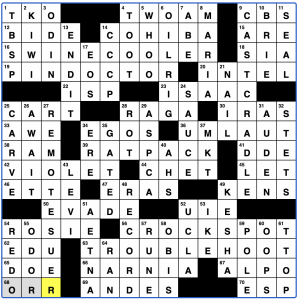 The title of Patrick Blindauer’s latest AVCX says it all – taking each S in the theme entries and moving it up a square creates some interesting results.  Across, it affects both the entry it’s taken from AND the entry it’s moved to:

Down, it only affects the entry it’s part of:

There’s something slightly inconsistent about that (and the remaining S squares in the puzzle), but S is a popular letter in the English language and this feels pretty constrained as is.

KESHA is right there in the grid as well, but seeing TKO start off the grid made me think of this Le Tigre song, so it’s what you get. 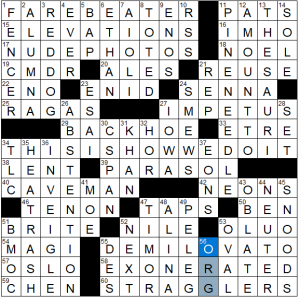 Did you want an earworm today? Thanks to Liz Gorski, you’ve got it, with Montell Jordan’s THIS IS HOW WE DO IT (34A- 1995 No. 1 hit by Montell Jordan) right across the middle of everything in today’s grid.

Stop me if you’ve heard this before, but there’s flavorful stuff all over this grid. New Yorker Wednesdays have been hitting the sweet spot lately, and are high on my list of recommendations for solvers looking to add a puzzle to their rotation. Maybe there are more names and proper nouns than some people like to see in this one, but I don’t see any unfair crossings.

This puzzle does a good job managing the necessary short stuff, both in the middle crossing THIS IS HOW WE DO IT, and in the corners to supply the longer entries. I’m usually pretty forgiving of glue if it supports longer entries that bring me a smile – ESAI, EONS, and HOR (32d- Opposite of vert.) aren’t my favorite, but ABSTENTION (26d- Voter’s option) and PINE NEEDLE (11d- Fragrant tree dropping) carry more weight and open the solver up into the SW and NE corners, respectively. And of course the opposite corners have those great 10-stacks, highlighted by NUDE PHOTOS (17a- HOT SHOTS?) in the NW and DEMI LOVATO (55a- “Sorry Not Sorry” singer who came out as nonbinary in 2021) in the SE. 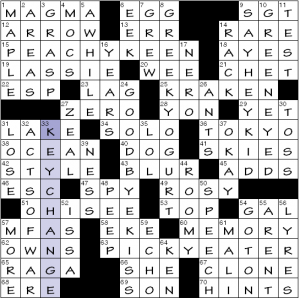 Quickly this morning, as I’ve got some obligations.

This unusual arrangement of two across theme answers and four down entries (3 themers + 1 revealer) fits six theme items into the grid. That’s all the permutations of K-E-Y accounted for!

Although the grid’s a bit broken up in the center, the vertically stacked eights in the northeast and southwest corners give the enterprise some additional heft.

Theme: The final word of each of the theme phrases is an anagram of “react”. 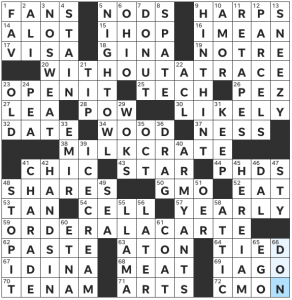 Great puzzle today! Three solid theme answers and a punny title that connects them is what I’m looking for when I solve USA Today, and this puzzle delivers. (Well, I guess ORDER A LA CARTE feels a little put-together, as a phrase, but I’m not mad about it). Because there are only three long theme answers, there’s room for a lot of other good stuff in the grid – the four 8-letter long answers through the middle of the grid – ICE CREAM, HINT HINT, NIGHT OWL, ARMY ANTS – are all super fun, and they each cross two theme answers! The long answers anchoring the other corners (particularly the northeast and southwest stacks) also add a lot of sparkle to the grid.

ALTERNATE ROUTE is the revealer (45a, [GPS suggestion, and a hint to each set of circled letters]). Those circled letters spell out alternatives to the word “route” hidden within familiar phrases. 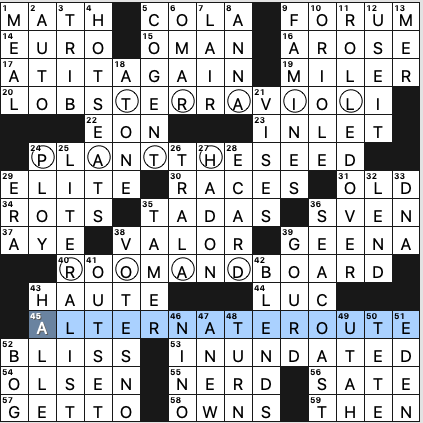 Hmm. Well, I’m just puzzled as to the pattern of circles in the theme entries. I note the consistency of how the hidden words are evenly spread out, but I don’t see a thematic reason as to why they’re spread out in the first place. We usually see hidden words in consecutive letters in familiar phrases (for example, TRAIL in LIGHT RAIL), but perhaps a full set couldn’t be found for this theme. I suppose this is the next best thing.

Edited to add: Flinty Steve pointed out in the comments below that I did indeed miss a layer to the theme. The circled letters are “alternate routes” because they are made of alternating letters. Clever!

Fill highlights include AT IT AGAIN, ROLLED OVER and LITERALIST [One eschewing interpretation of the law]. Who’s your favorite LITERALIST? I’m going to have to go with Amelia Bedelia. (Book proposal: Amelia Bedelia goes to law school, ends up a judge, and lands on the Supreme Court. Wackiness ensues.)

HOT SEATS is good, but a little odd in the plural. SEACOAST is also odd; most people just call it “the coast.” I tried SEASHORE and then SEABOARD prior to getting it right. FAMINES, INUNDATED, and VOTES NO are fine fill, but decidedly negative (see yesterday’s positive-feeling fill).

Four stars. And this is yet another debut. Congrats! 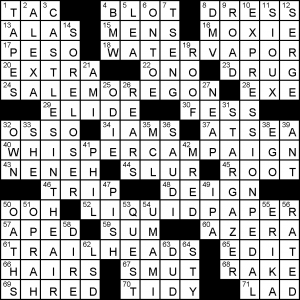 Hmm… The grid design in August Miller’s LA Times today is rather quirky. Normally, if you see 15 letter downs you’d think it was a down theme, but no the theme answers are across and each of those downs intersect three answers. CASTLESINTHEAIR is idiomatic, while EXPRESSIONPEDAL is more technical.

Oh? The theme? A standard “words with” affair, signalled by TRAILHEADS. The second part of four entries matches “___ TRAIL”. There is good variety in the trails, from the specific salemOREGON(trail) to three more general trails: waterVAPOR(trail), whisperCAMPAIGN(trail), and liquidPAPER(trail). WHISPERCAMPAIGN is a pretty spiffy spanning answer crossing both down 15’s.