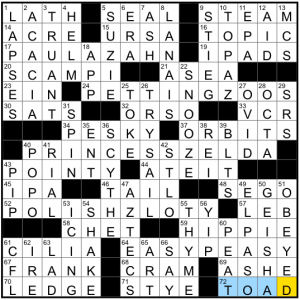 I enjoy the meta-ness of a Monday puzzle having EASY PEASY as its theme. I have no idea how common P-Z phrases are, but I liked the ones that Damon selected here. I am sure I’ve seen PAULA ZAHN‘s name before, but I needed every cross to get it (plus the theme, since I had “Susie” instead SUZIE for 5d). PRINCESS ZELDA and PETTING ZOOS were both great, though.

It’s puzzles like this that make me wish that the NYT would title their themed puzzles – EASY PEASY is a fun explanation of the theme that doesn’t give too much away, and seeing how the title connects to the theme is, for me, as satisfying of an aha moment as getting to the revealer. It also adds an extra clue to the theme for newer solvers! Not having to put the revealer in the grid would mean that the other theme answers would have a bit more space between them, which would remove some fill constraints and make the resulting product cleaner (sorry, STLO/OCTA/SEGO).

I was very slow to get started because I put in “slat” instead of LATH at 1a [Wood strip], which combined with not knowing PAULA ZAHN meant that the Northwest of the puzzle took a long time to come together. Both the word TRYSAIL and the clue itself [It’s hoisted on a brig in high winds] mean practically nothing to me, which was a bit of a bummer as it’s the central answer and the longest down, but hey, it crosses three theme answers so I can’t be picky. I did like the other longer fill of HIPPIE and SNOOZE though (although did anyone else think that [Kind of alarm often activated in the morning] as a clue for SNOOZE was weird? Doesn’t the snooze button stop the alarm? It’s not really an alarm itself? I don’t know, it felt off to me). A clue I did like, though: 37a [Round trips?] for ORBITS.

Hope everybody had a wonderful weekend! 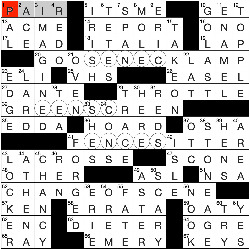 Catherine Cetta is back with an easy-peasy-lemon-squeezy Monday — I found it mostly unnecessary to use the Across clues and therefore unnecessary to know what the theme was until after the fact. Understanding the theme, as it turns out, is probably the hardest part of this puzzle.

Going to the revealer at 52A [Mental refresher … and a hint to the circled letters] gets you CHANGE OF SCENE. Each theme phrase has five circled letters, which are a rearrangement of the letters in SCENE:

I like that the theme clues could be relatively short this time around — sometimes on a Monday you get quite long theme clues to give enough hints to make it easy.

I wonder whether either the constructor or the editor has figured out that you can bait me into liking a puzzle by putting a Hall and Oates reference in (33D, “SHE’S Gone”). I am from Philadelphia, after all.

The fill is mostly smooth sailing — if you solve completely or nearly Downs-only, you’ll miss one of the only tough entries at 35A EDDA. Lots of verbs and common nouns, not a ton of facts to have to know, and theme entries that are visually evocative — what more can you ask for on Monday? 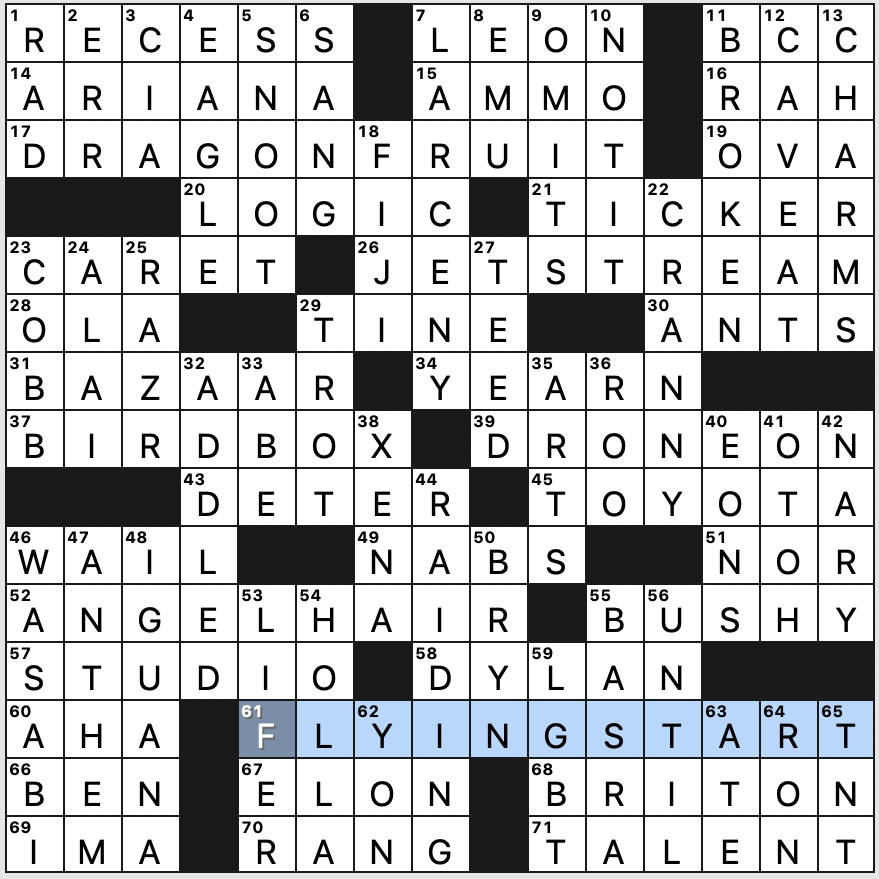 My initial reaction was to think that these were words that would precede “fly,” like “dragonfly.” But that quickly fell apart. I don’t know how accurate it is to say these phrases are off to a FLYING START, but having to readjust my idea of the theme is no skin off my nose, and the theme works well for a Monday.

This is a debut (Congrats!), and having to work with six themers is not a piece of cake, even if two of the themers are on the shorter side. There isn’t a lot of long sparkle, but the fill is impressively clean, with some strong mid-length entries like LARCENY, CRANNY, CAVEAT, WASABI, BAZAAR, FIJI, HOLLA, and IGUANA.

Clues are Monday-straight, so I will leave it there. 3.5 stars from me. 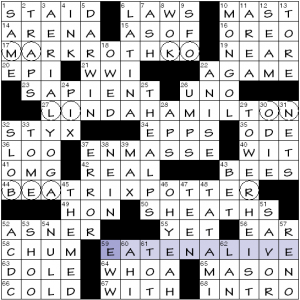 With the squares circled in advance, it’s easy to see what’s going on. Theme answers are all people’s first and last names; the circled terminal letters spell out, left to right, the names of predatory animals.

But it’s the revealer that doesn’t fully click for me: 59a [Mobbed by mosquitoes … or a hint to each starred clue’s answer, based on the word that surrounds it] EATEN ALIVE. Sure, I understand that letters bookending a word can be considered—especially in the cryptic crossword sense—to be ‘eating’ something. But the interior letters aren’t coherent on their own, so what’s being ‘eaten’? Is it supposed to be that the names are involutely devouring themselves? That’s nonsensical too. I’m flummoxed.

Anyway, two of the four-letter predators are terrestrial and one is aquatic. Would have been more satisfying to see an aerial predator as a third. HAWK? KITE? Possibilities are not good, alas. 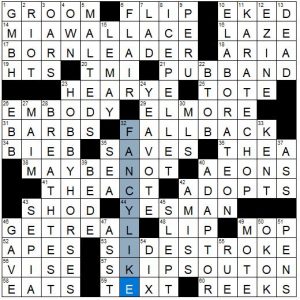 A toughie from BEQ today, and a satisfying one for me — no big stretches or anything too eyebrow-raising in the clues.

There was just enough new to me scattered throughout the middle and west side to keep me from a rhythm. Having now watched the music video for FANCY LIKE (32d- 2021 Walker Hayes hit with a TikTok dance), I’m not terribly upset or surprised I didn’t know it, but I do like Kesha. More embarrassing trouble spots for me: (29a- “Insecure” actress Christina) ELMORE, (34a- “Peaches” singer, fondly, with “The”) BIEB, and THEA (36a- Stand-up comic Vidale).

A number of entries were particularly satisfying once they fell: HOBBY HORSES (23d- Baby rockers), BORN LEADER (17a- Natural up front), and YEA VOTE (24d- Forward motion?), which maybe I could have seen quicker on a sharper day. I quite liked the SIDESTROKE / SKIPS OUT ON stack in the southeast, as well as MIA WALLACE (14a- Uma Thurman’s “Pulp Fiction” role) above BORN LEADER. Long answers and connectivity are the keys to my heart in themelesses, and this one delivers.

I will note that I liked BREATH TEST (28d- It may be taken after swerving) a lot more when my naive self thought it was a driver taking a deep breath after missing a deer, or whatever. I realize now that it’s a reference to impaired driving, and I like it much less.

Theme: The first word of all of the theme answers (which is on top, given that they are running vertically) is a type of hat. 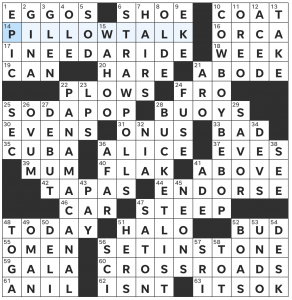 I was so impressed by this construction! There are (great! PILLOW TALK is such good fill) stacked 10-letter entries in the NW and SE corners. Usually I see that happen more with puzzles that have only three theme answers, but this one has four, so that’s even tougher to pull off. The title perfectly matches the theme, and the fill was so so smooth. Some notable clues are below: 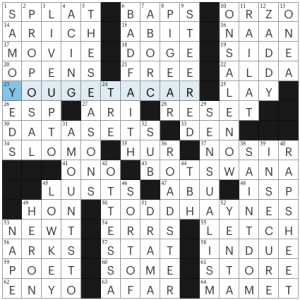 Oops, I’m still not in a routine of remembering to blog the New Yorker puzzle on Monday mornings, and today I got my eyes dilated so it’s only now that I’m able to wrangle the puzzle. Should’ve gotten a sub—ah, well. Quickly, then—

Fave fill: Oprah’s “YOU GET A CAR!”, TODD HAYNES (Far From Heaven is the only film of his that I’ve seen), OTTESSA Moshfegh (though I did lean on crossings to remember her name), LOW-KEY, BAD FAITH, and ZADDY ([Slang term for an attractive, often older man with a certain je ne sais quoi]—learn it if you didn’t know it because ZADDY is a fun word).

Did not know and/or forgot ever learning: 62a. [Greek war goddess], ENYO.

Also didn’t know BOTSWANA is the [Setting of the Bessie Head novel “A Question of Power”]. Wasn’t familiar with the author. Appreciate learning this!