Theme: Each theme answer begins with the letters AA, forming a DOUBLE A TEAM 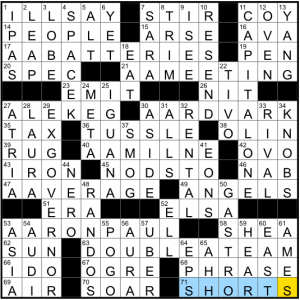 What an apt theme from Adam AAronson today! I liked seeing all the different ways that phrases could start with AA, which I had never really considered before. For me, I found the answers where the two A’s were said as initials to be the most satisfying (and on a similar note, A AVERAGE was my least favorite since when you say it aloud it only sounds like a single A!), but the theme using all sorts of AA’s kept me engaged throughout the solve – it felt like an extra layer was added. It was also nice that the puzzle had a revealer, even though it hypothetically could have run as just a “phrases that start with AA!” puzzle. I like it when a puzzle has more of a reason to exist beyond just “words that fit in this category”; again, it’s a nice touch to elevate a simple theme.

I got tripped up right off the bat with thinking that remotes had triple A batteries, and then again at the end of my solve when I kept trying to put something related to “minor league” in the revealer spot. It didn’t help that I had “LPs” instead of EPS, and “aah” instead of AHH – although I really should have spotted that last one as a mistake, because this puzzle has no extra AA’s that aren’t part of the theme answers!

There are 7 theme answers in this puzzle, which is really impressive not only for a Monday but for any 15×15 crossword. And some of them are stacked! (Check out the overlap on AA BATTERIES atop AA MEETING). As a constructor, this amount of thematic material puts a ton of constraints on your grid design and fill, which in turn can make the solver’s experience suffer if you create a grid with lots of junk in it. That was not the case today, though! There are a fair number of three letter answers, but they’re well spaced through the grid and no area (well, maybe the NE and SW) feels closed off. There’s also remarkably little junk in the fill, assuming you know Sissy SPACEK (and remember how to spell her name, unlike me). And there are the bonuses of CAPITAL ONE and EX-GOVERNOR to boot!  Overall, a great Monday puzzle with layers for all levels of crossword interest to enjoy – I had a lot of fun solving this one. 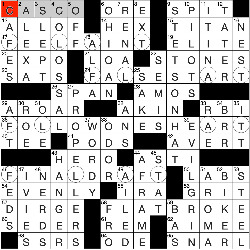 Catherine Cetta’s theme seems seasonally appropriate, given that many of us will have opened our wallets to buy lots of holiday presents. The revealer at 58A [Totally out of funds … and what each set of circles shows, casually] is FLAT BROKE, meaning that each theme entry has the word FLAT “broken” up through the entry in the circled squares.

I don’t love ONE’S phrases, and would have much preferred FOLLOW YOUR HEART in the 36A position. But I do like that F is always the first letter and T is always the last letter in each theme phrase — a nice touch of consistency above what the revealer would strictly call for.

I wish CASCO were not at 1-Across — it’s a tough entry for a Monday, and the 1A position, although of course you don’t have to start there when you solve, does a lot to set the tone of a puzzle. Otherwise, though, this is a nice clean grid without a lot of proper nouns and with some fun longer entries like STETSON HAT and EVIL GRIN.

The revealer is POP THE TOP (36d, [Request to a convertible driver, and a hint to the starred answers]). The other theme answers (all in the Down direction) are familiar phrases whose first word (i.e. the one at the top) is something you can pop. 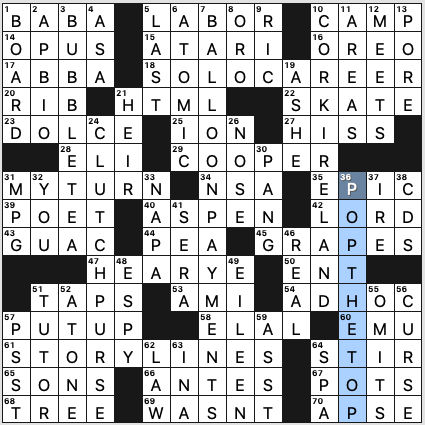 Very cute. My only question is whether people actually say POP THE TOP when referring to convertible roofs. I’m more familiar with “popping the top” off a bottle of beer or soda, and I know you can “pop the hood” of a car since the hood usually releases with a sharp, popping sound. But maybe I’m just unaware since no one I know has a convertible. It’s a familiar enough phrase and the theme answers are on target.

At first I thought the theme answers were in the usual Across direction, and I was trying to connect SOLO CAREER and STORYLINES. But those turned out to be fun bits of fill, not theme. I also like “MY TURN!,” “HEAR YE!,” and COOPER clued as a barrel maker. 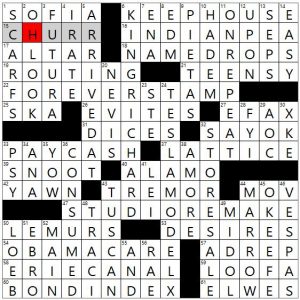 Fun one from BEQ today, particularly in the clues. I’m dropping this in here in a small window of time and will be back later with a fuller recap. 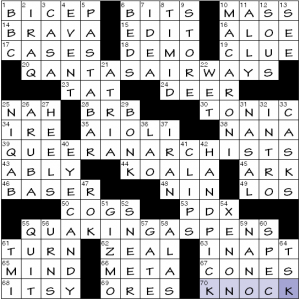 A trio of two-word phrases with the initials Q and A, presented as clues in a query/response–fill-in-the-blank, format, :

So that’s a nifty little theme, and we’ve got entries of 13, 15, and 13 letters—pretty good phrases for an unusual letter combination. Quite an amiable Monday offering.

Theme: The last word in each vertical theme answer (that is, the “Southernmost” word) can come after the word “cross” 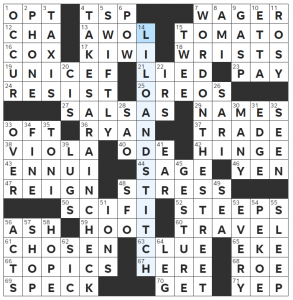 Short write-up today! Thought this was a really pretty layout with the four T-esque shapes. TAKES A RAINCHECK felt slightly off to my ears, but not so off that I can think of something that sounds better, and the other two theme answers were beautiful.

No long bonuses, but lots of nice short fill, like TOMATO, UNICEF, SALSAS, SCIFI, TRAVEL. If you’re looking for some sci-fi to read, I really enjoyed the collection of short stories called “Exhalation.”

Several things I didn’t know, but all gettable with crosses– CHA gio are a Vietnamese spring roll, chancho en piedra is a type of salsa, ETTA Baker is a guitarist, PEKOE is a type of tea, “Fire Shut Up in my Bones” is an opera with three ACTS.