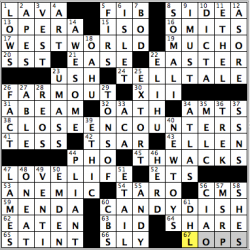 Hello there, everyone! First and foremost, hoping that all who are/were in the path of some dangerous weather systems that impacted the East Coast over the past 48 hours are doing OK!

Today’s puzzle is a reimagining of phrases, with one of the words also happening to be the last name of a celebrity. The clues are such that it portrays the entries as titles of those celebrities’ biographies.

Theme was fun, and there was some nice bit of fill outside of the themes such as FARM OUT (26A: [Subcontract, as a job]). Always give a grid an extra but of love that has references to Africa, like this has with SOMALI (8D: [Mogadishu resident]). Speaking of Mogadishu, one of the few movies that I have seen over the past few years is a pretty recent release, Escape from Mogadishu, about Korean embassy workers escaping the Somali Civil War in Somalia in 1991. It’s an awesome flick: action (very raw at times) and humor and suspense and Korea trying to get itself admitted to the United Nations to boot! Absolutely knew about the civil war there growing up, but did not know this angle at all until the movie that my brother told me about and exposed me to. Definitely take a little time out and look it up! You won’t be disappointed!

“Sports will make you smarter” moment of the day: FIRS (5D: [Evergreena]) – The first-ever NCAA Tournament for men’s basketball was held in 1939, and the school that won the title was the University of Oregon, whose nickname at the time was the Webfoots. (UO, as some may know, are now nicknamed the Ducks.) Because of the team’s height, owning a height advantage over most teams they played, the 1939 squad was nicknamed the “Tall Firs,” an homage to the trees found in that part of the country. That Oregon team was one of the first in college basketball to incorporate a “fast break” style of offense as well. Imagine, a height advantage AND wanting to run? Love it!

Theme: Various camera shots are identified at the starts of familiar phrases in the Down direction. The revealer is DROP SHOTS (32d, [Tricky tennis returns, and a hint to the starts of 3-, 7-, 9- and 24-Down]). 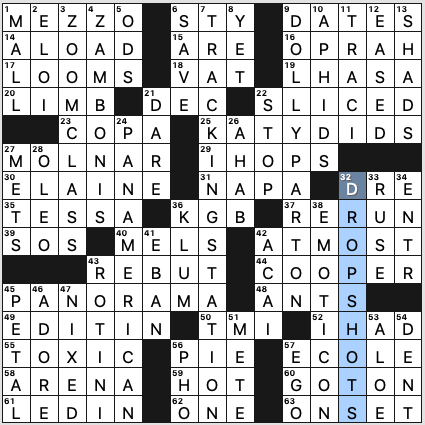 This did not solve like a Tuesday, especially with all the proper names in the fill and clues in the northwest. Also, do people know these camera shots? Sure, zoom and pan are gimmes. Tracking is gettable and I can infer what it means. But I’m not sure what a dolly shot is, and would need to look it up. I know what a dolly is, but can’t think how a dolly shot would be different from a tracking shot just off the top of my head. You can learn more here.

So yeah, that northwest corner with stacked MOLNAR, ELAINE and TESSA plus “Opera’s Frederica von Stade” in a clue, plus the fact that the grid is very segmented, plus the fact that the two long down clues are tricky question-mark clues, meant progress was slow going up there. I got to the point where I needed to rely on grokking the theme, but then I didn’t have enough crossings for ZOOM CLASS with its tricky clue to make any sense. Didn’t know what Narcan is (5d), 1d [Buyer be where?] seemed like it wanted SALE, and I was sure that 17a [Weavers’ contraptions] was referring to birds NESTS. Once I sorted that one out to be LOOMS, then things finally started to fall into place.

Elsewhere I liked KATYDIDS crossing APHIDS, and EMOTICON, but PANORAMA feels like a dupe of PAN AMERICAN, and I could’ve done without gluey ENTR and EBAN. ZAMBONIS is nice, of course, as is its clue [Ice machines?], it just frustrated me along with the other toughies in that corner.

I’ve already noted all the notable clues above, so I will end here. I found this one to be on the more frustrating side, at least for a Tuesday. 3.25 stars. 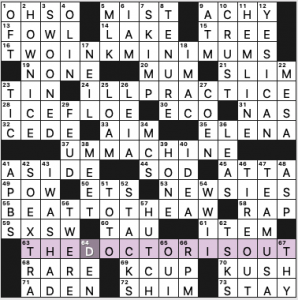 The constructor riffs on Lucy Van Pelt’s advice-booth sign THE DOCTOR IS OUT (63a. [Lucy’s empty-booth sign in “Peanuts” … or a hint to 16-, 24-, 37- and 55-Across]) by taking out the DR from familiar phrases and cluing the resulting goofy phrases accordingly:

Might be slightly more elegant to have the DR-less words all appear in the same slot—here we have one middle of the phrase, two starts, and one end.

Fave fill: “HOW NICE,” SWOONED, and the odd consonant combos of SXSW and K-CUP.

This was not my favorite puzzle. It’s a cute theme idea that fell down a bit in the execution.

Each theme answer is a phrase that contains an animal sound and is clued amusingly. At least in theory.

As I said, cute but not particularly well-executed. I also had issues with the fill. SST, EEE, REINK, partial and FITB A FATE [Worse than death], and the UELE River. I don’t remember seeing UELE before and I’m grateful. I could do without seeing it again. 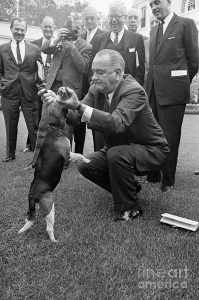 No one is having fun.

What I didn’t know before I did this puzzle: see above re: the name of LBJ’s dog.

And here’s the earworm I got from this puzzle.

THEME: The letter X takes the place of precious stones/metals 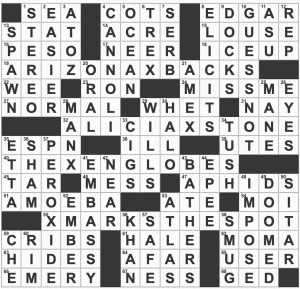 This was a fun one. I’ve seen the theme a few times- or at least the revealer to be sure. X MARKS THE SPOT sorta lends itself to Thursday-ish ideas and meta themes. The fact that the revealer isn’t particularly new doesn’t make this one any less fun.

Solid themers, though I am wondering if ALICIA SILVERSTONE has done anything as of late that is required viewing. I think I last saw her in The Graduate on Broadway. And that was some time ago! (2001?) THE GOLDEN GLOBES was a bit of a hot mess this year with it essentially becoming a Twitter-cast. I did check out the winner The Power of the Dog on Netflix. Highly recommend.

Only fill item I had a problem with was ASU because it is a dupe of ARIZONA DIAMONDBACKS. That didn’t sit right.

Everything else, just fine! Thanks for this one.

Great theme with solid fill and another unique grid. Side note: I’m enjoying these non-standard grid designs and the possibilities that they open up! 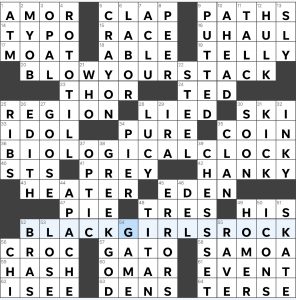 Theme: the word “block” is split up (or “busted”) in each of the themers

Today’s title is more descriptive than it might first seem, though with not seeing it right away, it took me a partially filled grid before it clicked. The cluing for BLOWYOURSTACK had me thinking more along the lines of “lose your cool” so I didn’t start looking for the “block” at first. Same with BIOLOGICALCLOCK, as I just wasn’t sure—it’s been forever now since I’ve flown especially on an International flight and had to deal with jet lag. For the third, BLACKGIRLSROCK filled in nicely and once I had that, I worked in reverse for the rest of the themers, having found the “block”. The split word themes are fun but often tricker for me to see, since it can be hard to tell where the word breaks up, particularly when the themers itself isn’t at the forefront of my mind. Trying to discern a pattern without the full themer is tough but once the pattern is apparent then the rest of it usually fills quickly.

Stumpers: CLAP (“boom” made more sense to me), TERSE (not difficult cluing but originally thought of “concise”), and ROTOTILL (needed the crossings, kept thinking “rotated” or “rotating”)

Once I puzzled it out, the theme was great and had strong themers. The rest of the fill and cluing were solid as well. A fun solve!