Announcement: Matt is participating in EnigMarch, which is a daily puzzle construction challenge. It’s a great mix of different types of paper puzzles. You can get his submissions for free at his site: https://maelstro.wixsite.com/mattjones/mattdoesmarch 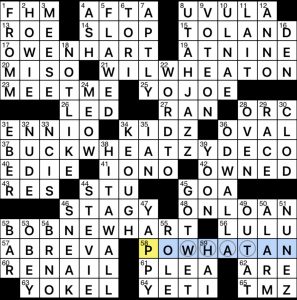 Now on to this week’s grid! The title refers to the phrase “What’s in a name,” and the theme entry names all contain the letters WHAT in that order, but not consecutively until the last entry.

The theme is fine. I like the “What’s in a name?” touch. I wish the names included some more modern folks, though. With the exception of the historical figure, the other entries were at the height of their fame in the 90s or earlier, and I wouldn’t expect younger solvers to necessarily have heard of all of them. 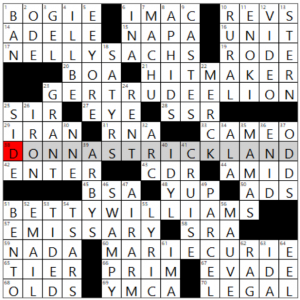 March is Women’s History Month, and Mary Lou shines the light on Nobelists: Swedish NELLY SACHS wrote about the struggles of the Jewish people. I didn’t know her name, but GERTRUDE ELION helped develop the first anti-rejection drug for organ transplants so I’m personally grateful for her work. (Wikipedia tells me she also had a hand in AZT and acyclovir. We stan a legend!) DONNA STRICKLAND is more recent, and I do not remotely understand what chirped pulse amplification is. Northern Ireland’s peace activist BETTY WILLIAMS and physicist/chemist MARIE CURIE round out the set.

Having five theme entries occupying 59 theme squares tightens things up some, and I spy some entries that might be a bit on the hard side for newer solvers, particularly if they intersect with the names that are (but shouldn’t be!) less familiar than CURIE. SSR with a surpassingly vague [Old atlas inits.] clue, CDR, TSARS, AIR ARM, IDYL, ENOKI, ENID …

That’s all from me.

Theme answers are familiar phrases where one word that originally featured the bigram EA has its E extracted, hence the title. 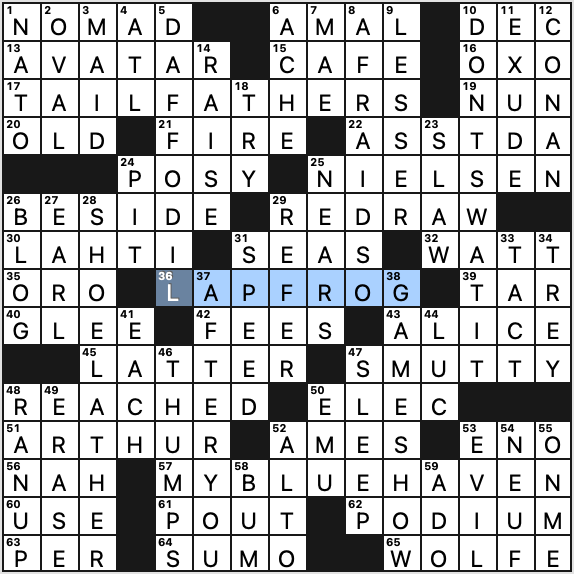 Not bad. The title makes a good basis for the theme, and it’s easily grokked while still maintaining interest throughout the puzzle.  I didn’t LOL at these, but I definitely liked the frog and fly ones.

A pinwheel pattern of theme answers usually precludes any other long fill entries, but today we get bonuses DAFFODIL and GAME SHOW as well as conversational entries “AFRAID SO” and “AFTER YOU.” Very nice.

The LAT did not jump on the International Women’s Day bandwagon. Each themer has three letters circled. This morning the role of circles will be played by the color orange. 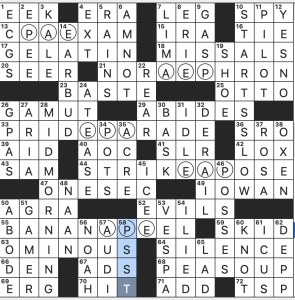 So are we looking for a clever comment about APEs? A reminder that many of us can benefit from the EAP our employer provides? Nope. 68a [Thick fog metaphor…and what set of circled letters is?] is PEA SOUP. Not sure the SOUP thing really works for anagrams, but I’m probably being picky. And I didn’t realize until I typed this up that the three letters span at least two words in each answer. A solid Tuesday theme.

I’m rushing out the door so I’ll cut to the chase. What I didn’t know before I did this puzzle: that an ACRE is comprised of 43,560 square feet. 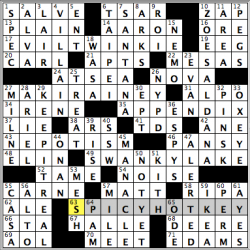 Crossword Nation puzzle solution, Week 562: “Where Are My Keys?”

Hello there, everybody! Hope you all have been doing well lately and having a good start to International Women’s Day!

Today’s crossword is definitely one that allows you to key in to the theme, literally. Each of the four them entries are turned into puns when letters that form a “K”-sounding syllable are added in them. As paranoid as I am now about losing keys after I lost the spare keys to an apartment that I was staying in a few years ago, I definitely hope I never have to ask where my keys are ever again!

How much did our constructor KEEP IT REAL (29D: [“Just be natural”]) by having that real nice pair of non-themed 10-letter down entries, including ZOE SALDANA (10D: [Portrayer of Lieutenant Uhura in “Star Trek”])? My brother has gone on a “Star Trek: The Next Generation” binge over the past month, and is essentially trying to watch all of the “Star Trek” iterations after the original series. Out of the blue, but cute! NEPOTISM, while annoying and maddening when it happens at your expense (including to me, which occurs so much in broadcast/digital media…ugh), is a good addition when it comes to filling in a grid (43A: [Hiring practice that’s all in the family]). Let’s hope that spring weather is indeed around the corner for most people in the country, and seeing PANSY (46A: [Spring bloom]) intersect OXEYE might be a way to think about the better weather that, hopefully, will be ahead (33D: [Daisy variety]).

“Sports will make you smarter” moment of the day: AARON (14D: [“Appalachian Spring” composer Copeland]) – Many know about “Hammerin’ Hank,” the great Henry Aaron, but not as many know that the legendary baseball slugger had a brother who also played in the Majors. Tommie Aaron, Henry’s younger brother, also played for the Milwaukee/Atlanta baseball franchise, making his MLB debut in 1962. Tommie, who was a first baseman and left fielder, played 437 career MLB games as he yo-yoed between the bigs and the minors. In 1967, he was named the International League (AAA level, just below MLB) Most Valuable Player. With his 13 career home runs, Tommie is one-half of the brother duo with the most combined homers in Major League history. (Henry hit 755 homers.)

A fun Tuesday puzzle with a great grid design, clean fill, and a fun theme and themers! 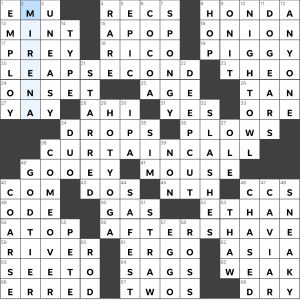 Theme: the last word of each themer can be combined with “close” to form a new phrase

Though I have heard of it, it took me a few moments and crossings to fill LEAPSECOND which then becomes a CLOSESECOND with the theme. At the CURTAINCALL, be sure to mind the grand drape otherwise it might be a CLOSECALL. AFTERSHAVE always evokes the image of Kevin in the movie “Home Alone” which he wasn’t used to but certainly many people enjoy after a CLOSESHAVE.

Stumpers: EMU (new reference for me but excited to learn about this Aboriginal constellation and Aboriginal astronomy), YAY (first tried “yes”, “yea”, and “yas”), and PIGGY (just didn’t click without a few crossings)

A smooth solve for me today with lots of excellent entries and delightful cluing. For additional insight and constructors’ notes on today’s puzzle, check out Sally’s blog post as well.

THEME: The word TOOTH is created, bit by bit, at the starts of sentences. 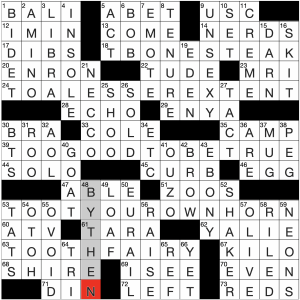 Very nice puzzle! Colorful phrases, and I love how the first word stands alone in each of the themers. Also delighted that the chosen phrase was TOOT YOUR OWN HORN instead of what I initially entered (TOOT ONE’S OWN HORN). I hate the vague ONE’S that so often appears.