Hi folks and happy Monday! I’m coming off a “probably as good as I’m ever going to do” 55th place finish in the Lollapuzzoola online division so I’m happy to be solving a puzzle that’s a little less complex than those ones (although they were all incredible and I really encourage folks to get their hands on them if they can!) 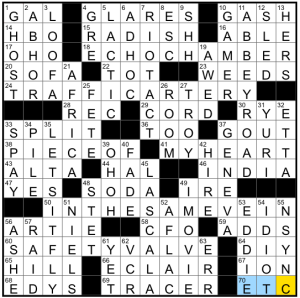 I liked this theme a lot. First of all, the song is great, and has been covered by basically every artist you can think of. It was originally recorded by Erma Franklin (remember her for future “Erma” clues!), but made famous by Janis Joplin. Some other notable covers are by Faith Hill, Shaggy, Beverly Knight, and even ETTA James (who makes an appearance in this puzzle).

But enough music history! Each of the theme answers stands alone fairly well, and do a good job of changing the meaning of the heart parts. I wouldn’t say “obscuring” necessarily – by the time I had gotten ECHO CHAMBER and TRAFFIC ARTERY I had an idea what was going on – but getting the revealer still felt satisfying. Speaking of satisfying, I love how neatly the 14-letter revealer is broken up across the middle of the puzzle. Also, there aren’t any notable heart parts missing, which helps the set feel more complete.

Given that there are 5 (technically 6) theme answers, there’s a lot of constraints on the fill. And yes, the NW and SE corners are quite closed off, which is one of my pet peeves in grid design. But look at everything else! I mean, ABBEY ROAD and LETS IT FLY both cross three different theme answers, and RIOT ACT and LA SCALA both cross two. There’s almost nothing in here that I think is unreasonable for a Monday – mayyybe YURI or ALTA, but that’s it. There are some non-thrilling words like SHH, STET, and both OHO and OHOH, but hey, it’s a Monday crossword, folks have to learn their crosswordese sooner or later.

Favorite clues today:  [Blinky, Pinky, Inky or Clyde, in Pac-Man] for GHOST and [Wonderstruck] for AWED – congrats to Taylor Swift on her VMAs triumph (iykyk).

Theme: SPLIT ENDS (59a, [Concern for a stylist, and what’s found in the circled letters]). Theme answers are familiar phrases whose outer letters spell out a synonym of “end” (i.e. behind, derrière, tuchus, buttocks, gluteus maximus). 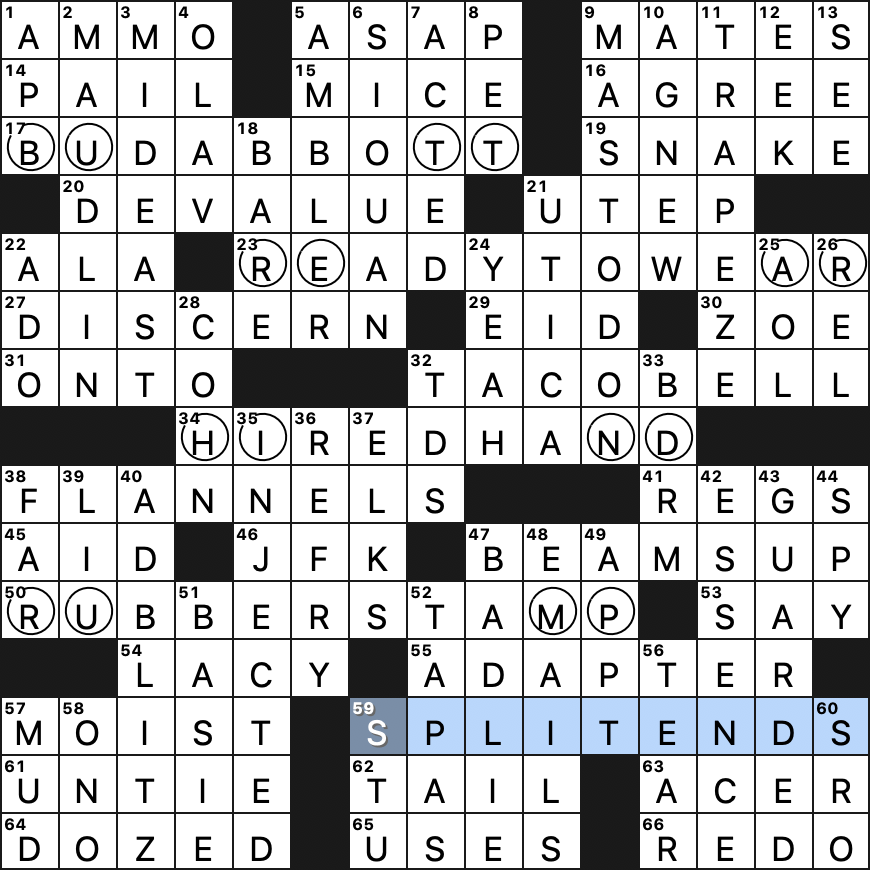 It was pretty clear what was going on with the theme answers by the time I got to the second one, but I still couldn’t tie it to the title. I needed the revealer for that aha moment, then it all made sense. I wonder what a new solver thinks when their first theme answer leads them to the word BUTT. 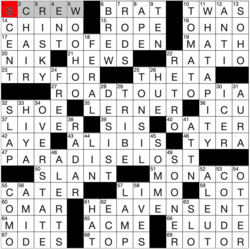 I have been known to beat the drum of “not every themed puzzle needs a revealer.” This one, though, I think could have used one.

What they all have in common is PARADISE, or a synonym thereof: EDEN, UTOPIA, PARADISE, HEAVEN. But because the theme words are inconsistently placed — two at the end and two at the beginning of their respective theme entries — the theme takes a little more time to suss out than I think a Monday should. Also, with a 1952 novel, a 1945 film, and a 1667 epic poem in the mix, the theme set felt a little musty, the 2007 Keyshia Cole song notwithstanding. 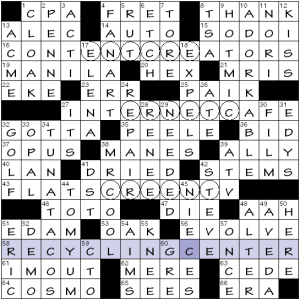 I’ve circled the relevant squares in the grid.

Interesting that all of these involve digital technology.

Would be fun if I could assert that this theme has been used before, but I have no recollection of such a one. 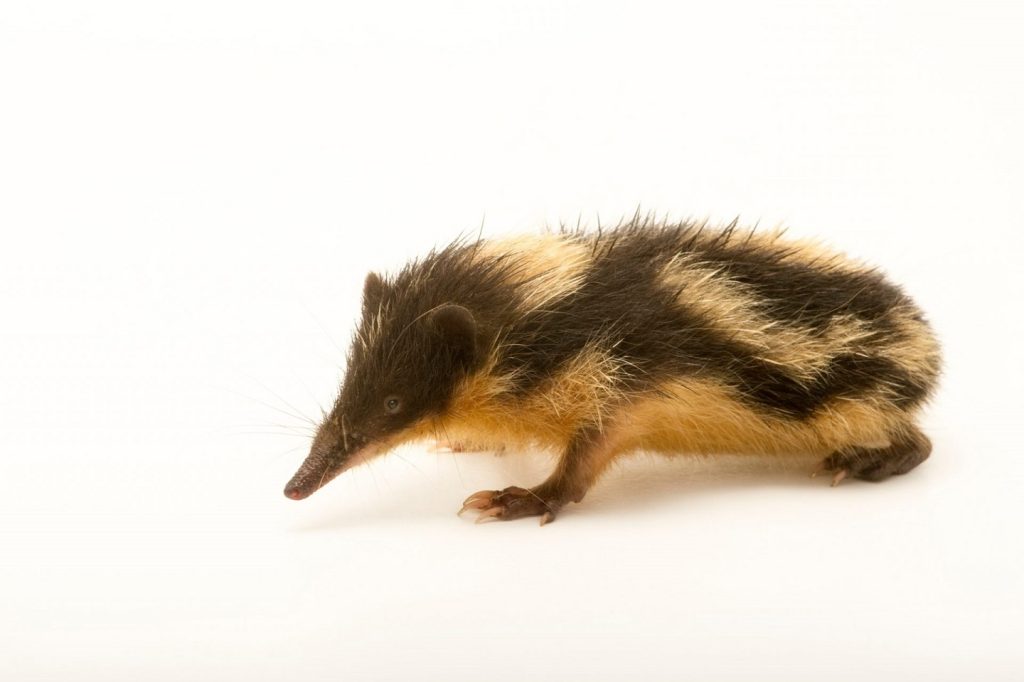 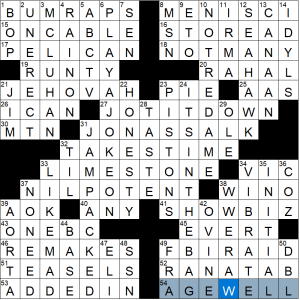 I’ll have to come back later to flesh out a review of this lovely 66-worder. I had a lengthy conversation with Sid Sivakumar at Lollapuzzoola this weekend about my love for 66- and lower-word count puzzles. This one had a mix of gimmes and tough stuff, but much like another themeless I solved this weekend, I chunked it off making use of crossings.

Brendan has some nice variety in how he generates difficulty in this puzzle: I suspect your experience will vary based on how well you see through a handful of misdirects; I simply couldn’t make sense of [41a Stars realm] for SHOWBIZ or [38d Monday night program with a prominent ring] WWE RAW until I’d spent a minute or two in that corner trying to wrap up. “Cheviot” in the clue for [42d] and “Eclogue] in [14d] were both words I knew I’d heard, but not well enough to move quickly on. 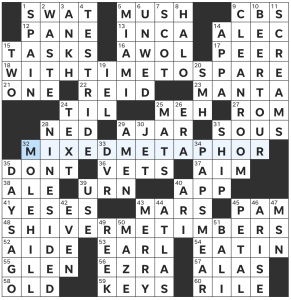 usa today– met in the middle

Good morning, folks! Congrats to Ada for her win at Lollapuzzoola over the weekend! Today she gives us a puzzle that has three long entries with the letter string M-E-T exactly in the middle: WITH TIME TO SPARE, MIXED METAPHOR, and SHIVER ME TIMBERS. All of these are great answers, but the clue for the second made me smile the most (“You can put all your eggs in one basket, but you can’t make them drink,” e.g.).

It felt like a lot of fill-in-the-blank clues in this puzzle– or maybe that was just because there was a little run of four all close to each other during the acrosses. Beyond that, I am trying not to interpret CLEAN ROOM as a personal attack (I was supposed to do it on Friday, and then I was supposed to do it yesterday, and now I am supposed to do it today), and I liked seeing a shout out to “Kim’s Convenience.” 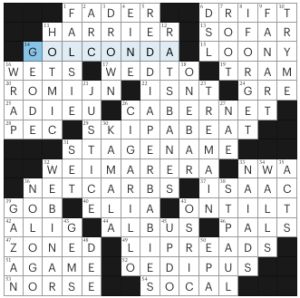 The puzzle was easier than I expected for a Monday New Yorker themeless.

til (today I learned): GOLCONDA means [Source of great wealth].

Natan’s had a professional (and perhaps personal) interest in refugees, so it’s not surprising to find GAZAN clued as [Resident of the Shati refugee camp, e.g.].