Theme: ADVANCED DEGREES (36a, [Post-college goals, e.g., or a hint to what the starred answers are progressively “awarded”]), specifically Masters of Arts degrees—or MAs—are “awarded” to familiar words and phrases, turning them into something else. Further, these “degrees” are added in such a way so that they seem to “advance” across the grid as during the solve. 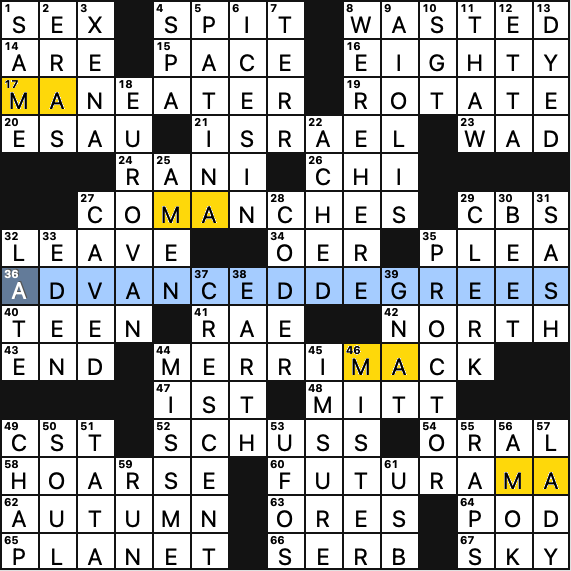 My first instinct was that 1a SEX was involved in the theme because of its placement and because it can precede the word “education” found in the title. But that quickly fell by the wayside when I saw the asterisked clues.

My second instinct, after hitting the revealer, was that we’d see an advancement from Bachelor’s degrees to Master’s to Doctorates, but that idea was dashed as well after unveiling the second theme answer. 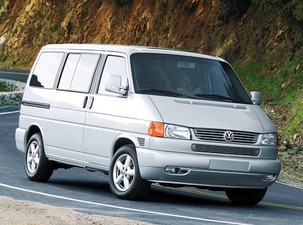 The VW EUROVAN. Sounds a lot cooler than it looks.

Finally, I realized what “Advanced” was referring to, and I was somewhat mollified. I still wanted more than just MAs for some reason, but the theme works well for what it is, and the choices of theme answers are really quite nice, especially the MERRICK/MERRIMACK find. All in all, a tidy execution.

Top fill includes “WE’RE HERE,” EUROVAN, CRESCENT, PATINA, PROCTOR, and “MISS ME?” followed by a sarcastic “I’M SURE.” Nice job all around.

No, I’m not going to do the whole review without vowels. I think about it every time. Maybe someday.

I never know quite what to say about these. I enjoy them! It’s a fun challenge. I like the way my brain sort of shifts gears partway through and I can start entering answers in the grid just like normal. I like the odd combinations of letters and the way long words get much shorter than I expect. I like working backwards when I’ve filled in something by crossings and I have to figure out what the word is from the consonant pattern. They’re not everyone’s cp f t, f crs.

Peter gave us three versions: no help, with multiword tags, and with enumerations. I did the “no help” version because of course I did. A few things I liked: 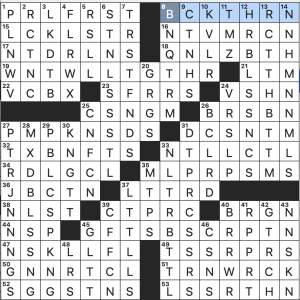 Things I remained puzzled about after solving:

What I didn’t know before I did this puzzle: see above re: REACTANCE. I also did not know that the redroot, cascara and jujube plants are part of the BUCKTHORN family. To be honest, I didn’t know there was a jujube plant. I only know the candies. 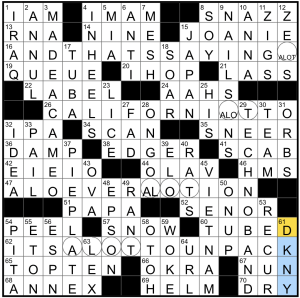 Today’s theme: ITS A LOT TO UNPACK

Ok, so you gradually “unpack” A-L-O-T as you progress through the themers, with each rebus containing fewer letters.  It wins me over by instantly evoking a suitcase, which sets off a cascade of travel-related sentiments.  And it played tough, mostly because I got to the center, and simply couldn’t wrap my head around pets having LICE (pets have ticks and fleas, children have LICE), a SCAN somehow being a “good look” (my mind wants it to mean something closer to a glance, even though I know that’s not correct), and an EDGER being the tool in question (and not an AUGER).  The downside is the dupe on A LOT in the first theme entry and the revealer, but it’s hard to find anything else long enough that ends in A-L-O-T while also changing the meaning of that sequence.  I’m sure you also instantly came up with SNUB-NOSED CACHALOT, but count again — it’s just off the mark.

Cracking: IHOP — the food is never great, but this place has the kavorka.  Maybe it’s because pancakes and waffles always look good on TV.  Just seeing it in a grid makes me want breakfast.

Slacking: TECHNO BAND — this rubs me the wrong way, perhaps because so much electronic music is the product of solo artists.  It also sounds like it wants to be TECMO BOWL but gets lost along the way.

Sidetracking: ANTI — speaking of LABELs, ANTI is the label for a handful of Tom Waits gems, including “Alice” and “Blood Money”.  They also remastered a few of his underrated early albums, my favorite being “The Heart of Saturday Night”. 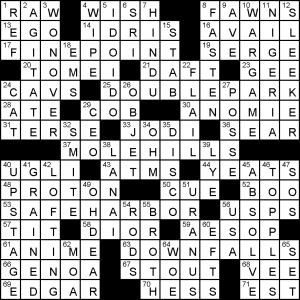 It took me a while to get into the rhythm of today’s theme by MaryEllen Uthlaut. It features terminal geographic terms that are common in American settler place names. Once I found that rhythm I enjoyed it for its creativeness:

Good morning, folks! I absolutely flew through this puzzle– I don’t think I ever stopped typing. I love a center stack, and I particularly love a center stack of thirteens. Here we get DEEP SPACE NINE, HANG BY A THREAD, and MONSOON SEASON. I have only experienced the latter one time, when I was visiting India. It felt otherworldly. 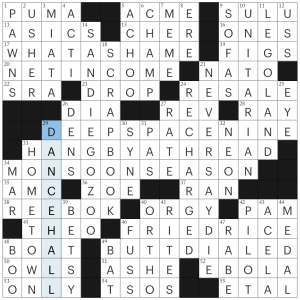 Other things to note: [Memory-storage unit?] for SCRAPBOOK is an incredible clue. This puzzle had two long answers in each corner, and my favorite corner was the combination of BUTT DIALED and FRIED RICE. What was yours?

Theme: The Y arrives late in the answer, having moved to the end of the first word of each answer instead of being the second letter. 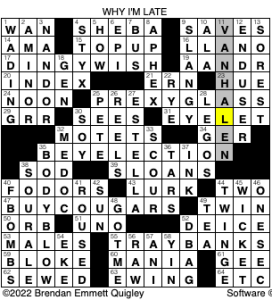 It took me a long time staring at these theme answers to figure this out. I had some sense about TRAY BANKS and TYRA BANKS from the beginning, but it wasn’t clicking. Ultimately, I thought it was something with the Y replacing another letter, so I googled DINGIWISH, which suggested DYING WISH as the alternative. From there, it all became clear. I really like that the Y moves to the end from being in the same letter position in each answer, though I didn’t know what a BYE ELECTION was until I googled it. (It’s a British term for an election to fill a vacancy, put simply).

Even though BEQ rated this as a medium difficulty, five themers made for a difficult fill. The SE corner was the one that came together the quickest for me, with TWINGE, WICKET, and ONE SEC. ESTELLA was also a fun literary bonus, in my opinion. I also liked 2d [“‘Songs In ___’ (Alicia Keys album)”] A MINOR and the cluing on 11d [“Band that infamously stipulated ‘no brown M&Ms’ in its riders”] VAN HALEN. The grid itself feels a tad closed off in the NW and SE corners, with black squares allowing for an intersection at APHEX, DINGY WISH, and ERN in the former and UNO, GOT ME, and TRAY BANKS in the latter.

Overall, a tough theme to crack but the payoff is high.

What a collab duo today! I figured that going in it would be more challenging while still being an enjoyable and satisfying solve—and what a treat it was! 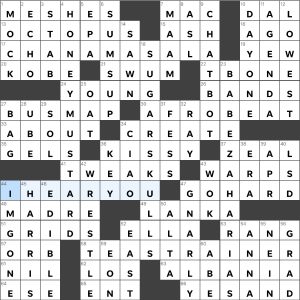 Theme: each downward themer starts with a term of endearment for a sweetheart

A tasty theme with a fun themer set! HONEYMUSTARD took me longer than it should have, as the cluing had Chinese food with “sweet and sour” on my mind for a while, and begins with HONEY. With the theme in mind, SUGARSKULLS filled right in and gives us SUGAR. BABEZAHARIAS was new to me, so I relied on crossings, and from which we get BABE. Also, the hint to it in the title was helpful, considering the plethora of bonus fill in the acrosses as well.

Stumpers: TEASTRAINER (seriously stumped—“tea kettle”, “tea ball”, “tea steeper”, even tried “tea spoon” as some are steepers then had to move on and wait for crossings), TWEAKS (had “re—“ on the mind: “redo”, “reworks”, etc.), and ALBANIA (clearly don’t know country flags as well as I thought)

The southeast quadrant gave me trouble and given the down themers, I was switching back and forth on the fill. I broke into that area once I began on the eastern down 3s and the southeast down 4s. Not sure why the acrosses were harder for me in this puzzle. Loved the grid and layout though, especially with the pair of 11s for bonus fill. 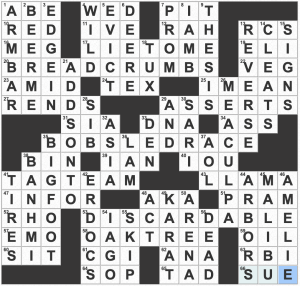 So, there are three Uno cards in the puzzle, each of which crosses a long theme answer. Said theme answer contains the word CARD mutated in an appropriate manner. It’s kind of high concept, and I didn’t really get what was happening while I was solving because I didn’t want to count letters, but afterwards I appreciated the construction (and the unique black square pattern, can’t say I’ve seen that before).

Fill highlights: TAG TEAM, MEA CULPA, LIE TO ME. Loved the title too – that “one” game referring literally to Uno!