Theme: Each theme answer contains an ingredient in pizza. 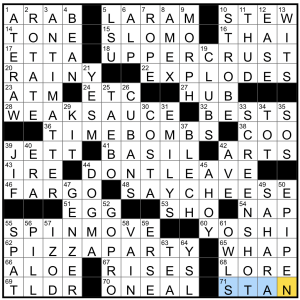 Very cute theme today!  I went to a new pizza place today so this theme was incredibly timely for me and me alone (and not only that, I had a Margherita pizza, so BASIL was basically a bonus theme answer).

I like how the toppings are added in order, from CRUST to SAUCE to CHEESE. Do people still say WEAK SAUCE? It feels very mid-2000s slang to me.I’m not sure exactly how the “party” in PIZZA PARTY affects the theme, but hey, it’s a fun phrase and much more exciting than if the revealer had just been “pizza”.

It’s interesting how short all the theme answers are – only 9 and 10 letters each, so not too much theme material in the puzzle. It’s also interesting how sectioned off the top right and bottom left corners are – the first down answer that breaks into the top left is in the 11th column of 15! That means it might be harder to break into those corners if you can’t get an answer in them off the bat (although this puzzle played very easy to me, so maybe that’s less of an issue today).

The upshot of everything I mentioned in that last paragraph is that Taylor’s created a grid with a fair amount of flexibility, and a lot of long slots for great extra answers. I love all of ANTIMATTER, SCREENSHOT, SPIN MOVE, TIME BOMB. There are also a lot of fun shorter pieces of fill, which is a place that the Monday crossword can sometimes feel stale. Not so today – GEN Z-ER, YOSHI, and TL;DR are highlights. The biggest stumbling point for me was right out of the gate at 5a, where I confidently put in “Niner” instead of L.A. RAM for 5a [West Coast N.F.L. player, informally].

Hope everyone had a relaxing weekend! Congrats to Taylor on a great NYT debut!

Theme: MIDDLE SEAT (62a, [Likely spot for a procrastinating traveler, and a feature of the starred answers]). Each theme answer is a familiar phrase hiding the word SEAT within. 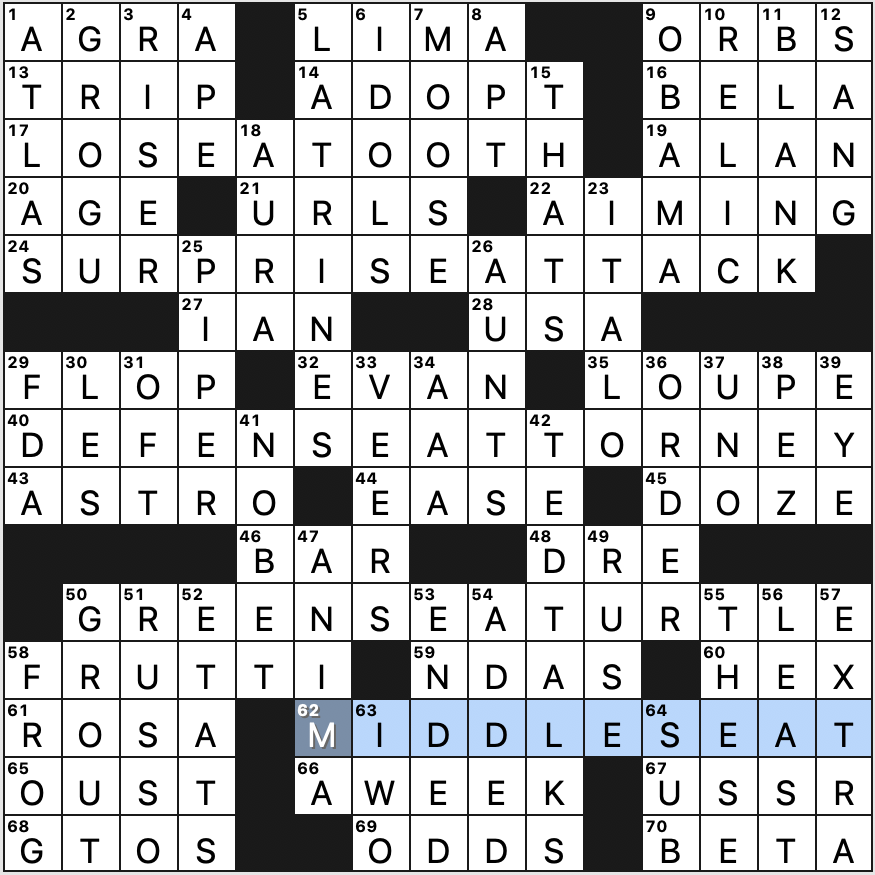 Nice choices in theme entries and a breezy, accessible theme for a Monday. When a theme is based on the word “middle” though, I always check to see if the keyword is in the exact middle of its phrase. That’s not the case in this puzzle, however. It’s an elegant touch when it is, but it’s not a dealbreaker. It’s better to have common in-the-language phrases than to have to adhere to an added constraint that’s not an essential part of the theme.

Not much in the way of long fill, only LATRINES and TED TALKS. And some tough-for-Monday entries in ITALO and ETATS, but the crossings are fair. 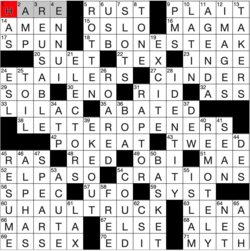 This puzzle has a revealer in the center, although I think the theme is straightforward enough that it doesn’t need one. 38A [Envelope-slicing tools, and what the answers to the starred clues literally have?] is LETTER OPENERS, which is to say that each theme entry is a hyphenated word or phrase with a single letter in front of the hyphen:

I wanted something more out of this theme. I’m not sure “words and phrases that start with a single letter” is enough of a unifying factor to be satisfying; I would’ve loved to see some other connection between the entries (perhaps there are other food-related hyphenations that could go with T-BONE STEAK and C-RATIONS?), or if the hyphenated letters made a word.

The grid is mostly smooth — one quibble is that the MAE/SEAN crossing at 51A/41D was clued too hard for a Monday. If a solver doesn’t know either name from the clue alone, as I didn’t, it’s not terribly hard to figure out what it must be by running the alphabet. But running the alphabet is not something one expects to do on Monday! 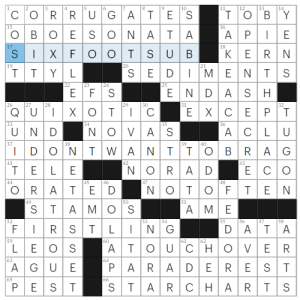 Difficulty level: Around a Sat NYT, suitable for Mon TNY. An awful lot of music stuff in the first batch of Across clues meant a very slow start for me, though. Liz’s forte, not mine!

Fave fill: SIX-FOOT SUB, QUIXOTIC, FIRSTLING (which feels more fantasy-fictionesque to me than biblical), astrology STAR CHARTS, OPEN SECRET, BIRTHPLACE. Less keen on CORRUGATES (when do you ever use that -S form of this word? and it’s spotlighted at 1-Across), A PIE, EFS, TELE- and ECO-, AGUE, GUAR gum, and the SIT AT/TUG ON pair. Sure didn’t know that an OBOE SONATA is a thing, but can’t begrudge Liz her music content (she plays viol and violin). 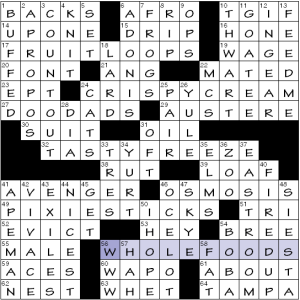 Theme here is food items spelled correctly, altered from the commercially ‘creative’ spellings. I’m not looking up the ‘real’ spellings, so I’ll probably only get some of them correct here.

Not really buying that as a revealer here, but the theme itself is novel. 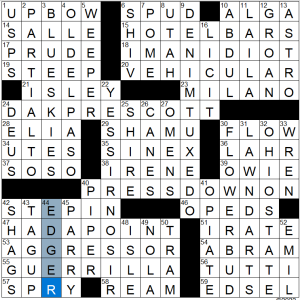 Brutal workday, so I’m going to stop pretending I can get a review written and just get this grid up. Interesting shape–on his site BEQ shares that he feels it’s a pretty grid. I’m often cautious around right angles like this rather than a more offset stack, but I quite liked this puzzle, which played easier for me than the last month or two from BEQ, though I can see (former? current?) Cowboys QB DAK PRESCOTT being difficult for non-football fans.
This entry was posted in Daily Puzzles and tagged Brendan Emmett Quigley, Ed Beckert, Elizabeth C. Gorski, Jeff Chen, Josh M. Kaufmann, Lisa Senzel, Taylor Johnson. Bookmark the permalink.