Hi all! Sophia here filling in for Nate this Sunday.

Theme: “Fan Clubs” – common phrases are reparsed such that they sound like descriptions of people who really like certain things. 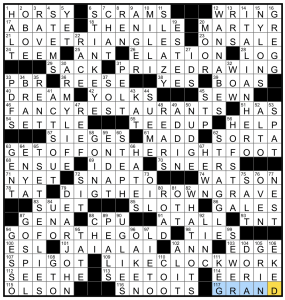 This is Sunday wackiness at its finest, and I’m here for it. I figured out the theme early on after LOVE TRIANGLES, but I still liked discovering each of the new theme answers along the way and seeing just how crazy the re-parsing could get. I’m surprised (but not in a bad way!) that the NYT is willing to use this meaning of GET OFF in a puzzle, but it made me smile the most, even though I realllly wanted the phrase to be “get off on the wrong foot” and was certain I had an error. 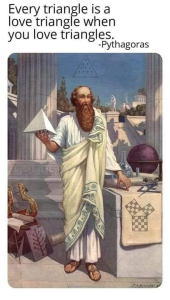 I’ll be interested to see how this plays difficulty wise for folks, since I think it might depend heavily on one’s ability to understand the theme clues themselves. I don’t know enough Greek/Latin roots to know just how well the “fan” translations are done, but when I knew one of them it made the answer pretty easy to get. On the other hand, if I didn’t know one, I was pretty much in the dark until the base phrase showed itself (DIG THEIR OWN GRAVE is the best example of this; I still only understand the “auto” part). Despite that, the puzzle felt easy to me, I spent my last two minutes error hunting.

Sunday puzzles can feel like a slog if the only exciting thing about them is the theme, so here are some other random things that I liked/thought about!

Sound off with your thoughts in the comments! Happy Thanksgiving week to those in the US! 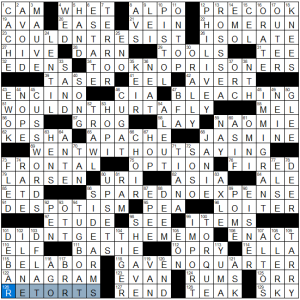 Our themers are idiomatic phrases with a negative element, but then clued in a somewhat literal way. It’s tough to explain:

A playful theme, reminiscent of Evan’s “Captain Obvious” series. Each base entry is plenty common in the language and the clues are a nice chuckle. Away from the theme, we don’t have a ton in longer downs, but what we do have makes the grid nicely connected.

Running late but will highlight two neat bits of gentle misdirection: [Popular game] for DEER asks you to reconsider the word “game,” and [Tower by the shore?] for TUGBOAT to reconsider “tower.”

Theme: As the title suggests, the trigram M-E-N is hidden within certain black squares. Theme answers start in one entry and finish in a corresponding entry on the other side of the black square. The second halves are also crossword-valid entries with their own clues (which I won’t list here). 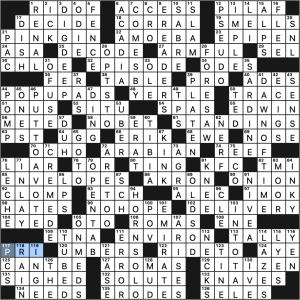 I definitely preferred the entries that were not just root + MEN + suffix. An entry like “fermentable” could’ve been “fermenting” or “fermented,” e.g., and that makes it less enjoyable than something like “fence mending” which is its own idiomatic phrase.

I had a quick look to see if there were other potential entries where the MEN is split among two words. I only found “name names” with “Ames” as the second part. The constraint of having a standalone second entry really tightens things up, and I commend our constructor for employing and sticking to it. The other approach would be to just have a “-” as the clue for the second half, and then you could have an entry like STEAM ENGINE. Either way works, but the approach in today’s puzzle is harder to pull off, so kudos on that.

Some nice long fill today in DAWN OF TIME, PUT TO A VOTE, HORN SOLO, DIG DEEP, OPEN TAB, POP-UP ADS. Hadn’t heard of PINK GIN [Cocktail colored by Angostura bitters], but the crossings are fair. It felt like there was more than the usual amount of crosswordese (ERAT, INGE, ASA, UGG, ARETOO, OTO, etc.) though.

Clue of note: 55a. [Newsman Newman]. EDWIN. This is how old I am: I used to watch David Letterman’s daytime show once upon a time, and EDWIN Newman would come on to read the news. I thought it was a gag at first, but no, Letterman had actual news on his show. Newman even hosted SNL once. Visitors to this blog might particularly enjoy the skit below.

The USA Today site is still showing Friday’s puzzle, but you can access it through Puzzle Society. Since I don’t have a subscription, I’m not able to get it, but I recommend checking out Sally Hoelscher’s blog for a write-up of this puzzle. See y’all on Thursday!