Theme: MAIL IT IN – the last word of each theme answer is part of a letter. 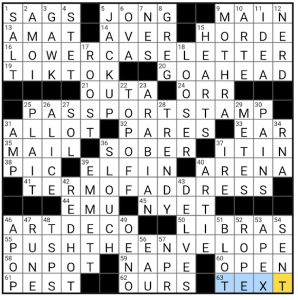 I wasn’t sure of the theme as I solved this puzzle, and looking back I think that’s because I’m not familiar with the revealer itself. I have heard the phrase “phone it in” much more than MAIL IT IN – I figure they can be used interchangeably? Anyways, the theme is nice if not particularly groundbreaking. The 15/13/13/15 plus revealer pattern is tough to do cleanly, but it works well here. PASSPORT STAMP stands out a little since it doesn’t disguise the letter word as well as the other answers, but it’s not a major sticking point. 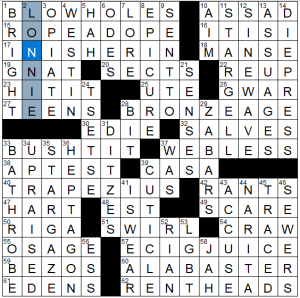 Grid for now, review later. Willie STARGELL [11d – Pirate Willie] was a Pittsburgh Pirate, baseball player, not a sailor (though maybe he spent time on boats. 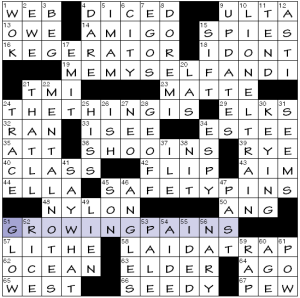 While solving, I was struggling to see any connection among the supposed theme entries, which was not helped by assuming 16a [Beer dispenser at a bar] KEGERATOR and 58a [Prepared to snare prey] LAID A TRAP were among them.

I
IS
INS
PINS
PAINS

Really not too much that’s exciting among the ballast fill. It gets the job done adequately. 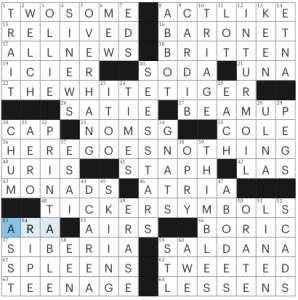 Easier than I thought it would be. And you?

Fave clue: 48a. [Harley-Davidson’s HOG and Olympic Steel’s ZEUS, e.g.], TICKER SYMBOLS. Not that I’ve ever heard of Olympic Steel, mind you. Might’ve been cute to use Caterpillar’s CAT alongside the HOG, though it’s less inventive than the ZEUS and HOG symbols that aren’t just shortenings of the company name.

Fave fill: THE WHITE TIGER, “HERE GOES NOTHING,” Zoe SALDANA, CARDI B, IN TURMOIL. THIMBLES is also not commonly seen in crosswords; liked the clue, [Protections for sewers], which might evoke manhole covers.

[Ragdoll’s call], MEW—there’s a cat variety called the ragdoll. Outside of crossword grids and Pokémon, I reckon the word MEW is really rather uncommon.

Crosswordese alert: [Constellation called the Altar], ARA. Much less familiar than the zodiac constellations, the Dippers, Cassiopeia, and Orion, but it’s got handy letters for a crossword. Meh.