What makes a niche become a genre?

One artistic success in the niche is not enough. For every Black Sabbath, there’s at least one Weird Al Yankovic: a successful innovator who still fails to rally others behind his example. It’s the difference between Survivor and 24, Superman and The Spirit, Mafia Wars and Phoenix Wright, When Harry Met Sally and Life Is Beautiful. We have no shortage of reality TV, superhero comics, social network games and contemporary romcoms. But, somehow, we’re not exactly drowning in real-time dramas, sci-fi anthology comics, courtroom drama games and “Holocaumedies.” To stick, a genre needs supply and demand. It needs to be reproducible: The Spirit and 24‘s approaches were too demanding for their contemporaries to replicate for more than an installment or two. It needs to be something people want on a regular basis: the success of Phoenix Wright and Life Is Beautiful seemed to come in spite of a difficult-to-sell concept, not because of it.

It’s hard to fault its pedigree. It was created by Henry Hook and Merl Reagle, and practiced by Mike Shenk and Trip Payne in the late 1980s and early 1990s. Payne has preserved his anything-goeses in his online puzzle archive, where he terms them the “Something Different,” and he keeps the form alive with an occasional new puzzle for the New York Sun and its successor, Fireball Crosswords, where it’s sometimes been called the “Wacky Weekend Warrior.” (I can’t bring myself to use either of these horrifyingly non-descriptive names. When I asked Payne about them, “anything goes” was his most palatable suggestion.) Quigley’s also tried the form, but only once, and Payne otherwise seems to be its sole practitioner, these days, like the world’s last American who can write in cursive. 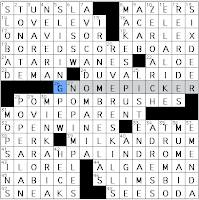 Anything-goes crosswords often have grids whose openness a Mies might envy. But they can get away with it easily because of their much greater potential for fill content. Oddball answers are the norm, and are in fact expected of any answer above a certain letter-count. Check it out: STUNS L.A.; MAZERS; LOVE, LEVI; ON A VISOR; BORED SCOREBOARD; POM-POM BRUSHES; MOVIE PARENT; OPEN WINES; MILK AND RUM; SARAH PALINDROME; NAB ICE; SLIM’S BID; SEE SODA; SLOB AD; TO NOTE; UVA RAM; SLIDING PEW; LESS W; AVOCADOMANIA; IRON UMBRELLAS; REVERE SKILLS; MAKES A PUN; LISTEN, DAME; ZERO-ARCH; ELLA-LIKE; RE-ERODES; SIX-DEER; MU MAID; POPE ALAN.

How can such answers be? At first, this grid might appear completely uncrackable. But crossword fan Pete Mitchell not only got through it quickly, he skillfully explained how he’d done so:

I found absolutely nothing unfair in this puzzle. In fact, I thought it was surprisingly easy, much moreso than I expected based on the recollection of my last experience with [an anything-goes]. The reason it wasn’t too hard, I think, is because most of the wacky phrases are combinations of two words that are common enough, but just aren’t typically used together. And the clues to each half, at least in this puzzle, were pretty straightforward. So, just let your mind go and trust your instincts, and things fall apart nicely. It may be an advantage if you’re one of those people, as I am, who tend to coin their own words via the application of standard English patterns where they don’t necessarily belong. So for me, for example, MAZERS was an immediate gimme. 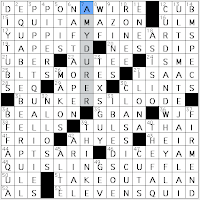 The clues to an anything-goes should be clear and clever, bringing together their previously-unrelated aspects with both whimsy and responsibility, as if the constructor is planning a blind date:
“Put a Starbucks in each of Edward Hopper’s paintings, say” (YUPPIFY FINE ARTS)
“Gooey sandwiches prepared over a campfire” (BLT SMORES)
“Stinkiness, length, brownness, etc.” (B.M. SPECS)
“Just the person the cowpoke was looking for” (TEX’S GUY) Some genres spread like wildfire and keep on burning for decades. Some flare up and disappear in a few years. And some have their flames tended carefully by a few faithful vestals, in hope that more mainstream acceptance will come to them when the time is right: “Alex Trebek fan-fiction, your time will come!”

I’m not sure I can say that the anything-goes’s time is now. But I would like to see another vestal or three join Payne in his vigil, at least. Make the anything-goes a weekly (or morely) feature, and/or make it the subject of a collection. Increase the supply! We can do it! And then we’ll see if the demand comes rushing up to meet the results. But for what it’s worth, Mitchell, Quigley, Payne and I don’t seem to be the form’s only fans. Peter Gordon’s Fireball Crosswords is making Trip’s puzzle a yearly ritual. A survey of 100 Google results for “Trip Payne” and “Something Different” turned up not a single negative review. Marjorie Pawling posted to The New York Times to ask after it. Francis Heaney cited it as a favorite. Reynaldo backed up Mitchell and sang the praises of all three of the 15x15s presented here. “There’s a gentle surrealism to this sort of puzzle,” she says, “and I always find [an anything-goes] to be an entertaining change of pace.”

I would add that it brings an unusual element of creative writing to the constructing and solving process. Much has been made of how Twitter’s 140 characters pushes creative writers’ imagination in new directions. I’ve enjoyed working in that format myself. So how creative can you be in 15 characters and less? (Or 21, at most?)

Next Thursday: The fabulous fact-finder! Be here if you want to be smarter.