I forgot to turn the timer on again. Under 10 minutes for the puzzle. Over an hour trying to suss the theme, and two fruitless attempts to find someone who had already solved and understood it before I remembered that the subscription includes a PDF with the answers. Good thing, because I would never ever ever have figured it out.

There are seven theme answers across, clued straight: The theme answers in the down clues are clearly identified. They’re clued straight and then “weird” – so 11D is “Malt Beverage [normal]/Bridge assent [weird]”. The answer is ALE/AYE. The L/Y square crosses the first L in LOLA…and then we have “Ford contemporary [normal]/Casino figures [weird]”, which is OLDS/ODDS, crossing the second L in LOLA. If you change the letters to their “weird” counterparts, you go from LOLA to YODA. What’s the connection, you ask?

So each song title is transmogrified into the Weird Al Yankovic version when you replace the “normal” letters with the “weird” letters.

This is a marvelous feat of construction. For one thing, PB had to find seven Weird Al songs with titles that don’t change the number of words and letters from the original (which eliminates, for example, his “Beat It” takeoff – “Eat It”). And then there are the normal/weird shifts as well to be worked in, and then there’s the cluing. No real clunkers in the non-theme fill, either – an abbreviation here, a foreign word there, but nothing that made me roll my eyes or gnash my teeth. I solved it smoothly and quickly – and correctly – even though I had no clue (!) about the theme.

But. But. The theme is pretty impenetrable if you’re not a serious Weird Al fan. And no, I’m not. I remember “My Bologna” (born in 1960, if you’re wondering) and when I looked at the video, I remembered “Yoda”. The others are all new to me, which is not surprising considering that I’ve never heard of the original song “Lump” or the group that recorded it. If I hadn’t promised Amy I’d blog this one, I would have finished it, shrugged, and come around tomorrow for the explanation. I appreciate and admire the stunning achievement, but I can’t say I really enjoyed the puzzle all that much. Three stars from me. First, the theme. Assorted words that fit various categories based on the letters in them:

I don’t object to “collection of words with weird little facts that apply to them” themes, but those long Downs (in isolation, they’re quite nice) criss-crossing the theme answers lock down a lot of the grid and leave us vulnerable to lousy fill. EXO-, OTROS, Z-BAR, OMOO, USLTA-crossing-the-terrible-EL-HI (and also crossing duplicative USMA, whose US means exactly the same thing), OCULI, A HOST, SO I, ECLAT, DYERS, ESOS? Lots of Scowl-o-Meter business tonight. There was also the awkward I’M HOT across the way from PANT with a “hot dog” clue. Shall we play Hot or Not? That’s not hot.

OGLED is clued as [Like many beach bods]. In the ogling spirit, let me refer you to a recent BuzzFeed post featuring Nyle, the first deaf contestant on America’s Next Top Model. Technically there are no beach pictures, but there are some pool photos. 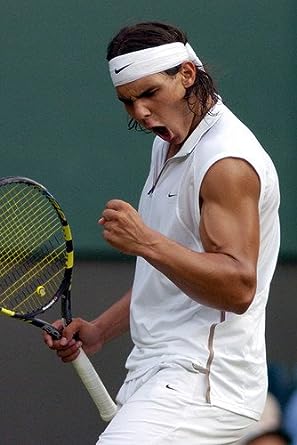 It’s game point, and you’re down 40-Love. Your opponent is serving up ACE after ACE after ACE (after ACE). Can you rally from behind and pull out the break? Take a firm grip on your TENNIS RACKET and put this one away! You got this!

Excellent service game from Alice Long (aka editor Mike Shenk) with a tennis theme. He’s got some outstanding top-spin on those serves because they’re turning right past us and going down the line for ACEs.

If you haven’t figured it out, the main theme entries all end in the letters -ACE. At this point, the Across entries turn Down such that the ACEs are all parts of vertical words (except for one, the revealer at 65D). Theme entries are:

All excellent theme entries, but then again, there are a lot of lovely phrases ending in -ACE (AMAZING GRACE, GIVE ME SOME SPACE, PEYTON PLACE, SHADDAP YOU FACE, ad infinitum).

If you’re a crossword-solving regular, you probably figured out what was going to happen  based on the title. I don’t quite get the central conceit (i.e. that ACEs are being “turned down”), but that doesn’t bother me when a puzzle is as fine as this one. I suppose it’s as simple as the fact that an ACE is a serve and “Turndown Service” is a phrase, therefore the ACEs get “turned down”. Ok, I suppose that works.

Also, if you didn’t notice, 13D and 46D are TENNIS and RACKET each with outstanding clues [Play with matches?] and [Head product] respectively. (No doubt the latter clue would have a different answer over at AVCX.)

Not a lot of sparkly long-downs aside from VENDETTA and OPERA FAN, but the cluing was deliciously tough-yet-fair throughout.

An outstanding puzzle and the best of the WSJ week by far. 4.5 stars from me. It’s Thursday!  BEQ named this week’s puzzle after the song “Ex’s and Oh’s”, and those very elements have infected the theme entries of this week’s grid:

In addition to Elle King’s influence on the theme entries, we get musical mentions for the EIGHT TRACK at 3D (which, despite BEQ’s assertions, are never going to be beloved by hipsters.  Trust me, I did college radio a few years ago, and the few promotional 8-tracks we got from labels trying to be the next big thing just gathered dust) and 62A‘s “All-time best-selling Canadian singer”, Celine DION.

Elsewhere in the grid, I liked learning the term PARISH PUMP at 30D (it’s a British idiom meaning “Of local importance or interest only”, as the clue points out), and I liked seeing CHILLAX in a crossword grid (at 10D), even if someone actually saying “Chillax” to me makes me immediately want to do the opposite.

One area where the grid felt a little underwhelming this week: there were a loooot of clues (okay, 9, but that feels like a lot) that were fill in the blank.  It brought down the quality of what I thought was otherwise a pretty good puzzle. Today’s puzzle was appropriately up and down in its appeal for me. The the theme is MARKETSWING(s), and the DOW is going up or down in various entries. It’s a very elegant conception. The execution was mostly good too, with one little wrinkle. I thought the theme entries themselves were well above average. The TWODRINKMINIMUM sounds only vaguely familiar, but it’s still a colourful phrase. The others were all excellent choices: NINTENDOWII, PGWODEHOUSE, and WHATDIDIDOWRONG. The one aspect I was less thrilled about, was that the WOD in PGWODEHOUSE is not spanning words like all the others were. It’s never good when one theme entry doesn’t work the same way, although the theme is not actually framed in such a way that it is a requirement.

A long with good theme answers, there are a stack of fun non-themers: REENTRY, OVULATE (wish it was clued more interestingly though), MRISCANS, PADTHAI, SUDOKU, the Google favourite WIKIHOW, and SWANEE all make for a well-rounded puzzle.

Like yesterday, some of the areas were a little rough around the edges. The grid takes strain around the consonant build-up of PGW and the result is AAAS/OSIER/EERO/DRU. Elsewhere the glue level is more typical.