Sam (who publishes crosswords on The Grid Kid, too) has crafted a nice wordplay theme that’s also a tribute to David Bowie. 35a and 43a give us DAVID and BOWIE with a Tuesday-grade revealer clue: [Singer of the lyric formed by the first parts of 20-, 24-, 40-, 51- and 58-Across]. Those five answers are GROUNDOUTS, CONTROL FREAK, TO TASTE, MAJOR PROBLEM (which doesn’t feel like a compelling lexical chunk to me), and TOMFOOLERY. “Ground control to Major Tom” begins “Space Oddity” (here’s a trippy original music video circa 1969), one of the all-time classic rock songs.

I like that Sam didn’t go the traditional “tribute to dead person theme” route with assorted song or album titles, just factual stuff, rather than creating this crosswordy sort of theme.

Nice fill: BLU-RAY, ST. LUCIA, IMODIUM (we’re still waiting for ENEMA to populate crossword grids but in the meantime, here’s its opposite), “I HEAR YA,” and TABLOIDS. Toughish for a Tuesday: B FLAT, EBAN, ILIA. I didn’t recognize this ILIA at all: 37d. [Heroine princess of Mozart’s “Idomeneo”]; the plural of the big pelvic bones is far easier for me. One of my fastest Jonesin’ solving times! Grooving into Stamford form, maybe? Or maybe it was a tad easier? Interesting theme this week; even Matt is into the Star Wars mania!

…otherwise there would be nine BBs! Yes, the theme entries use a total of 8 BB combos, and if you haven’t seen the newest Star Wars movie yet and you don’t know what is being spoken about, then at least you’re not a geek! But come on! Even I went to see it! Mainly because I didn’t want someone spoiling any surprises in it for me. At least it was better than the previous three unwatchable editions!

Great fill by Matt once again. Some favorites:

We’ll call it an even 4 stars! And if you haven’t seen the new Star Wars, just go right now and get it over with! I didn’t get the theme until I looked at this a while; it shouldn’t take that long to get it. But maybe it’s just me! Let me show the theme entries then I will explain:

OK, so the “ends” of the theme entries are the last words, and each can have the word “FACE” inserted to the “right,” or afterwards, to complete a familiar phrase. Thus we have  GAME FACE, BABY FACE, POKER FACE, and ANGEL FACE. It actually isn’t that complicated; so maybe it IS just me! Nice puzzle from C.C. again this Tuesday. Not too hard, as for me it was well under a 4 minute solve time. Great fill in this one. Other than the now defunct SSTS and and a couple of other minor squabbles, nothing in this puzzle is too wonky. Certainly easy enough for a Tuesday. A few high points for me:

Aha. A tribute puzzle to a controlled substance—that’s what we get today, by way of five phrases whose first or last word is marijuana-related. They’re good phrases. For the most part. And I was really enjoying the solve, until… Well, your response may have been vastly different from mine, but I was ultimately both surprised and very disappointed in the final themer. Here’s what we get:

So if this is not the freshest theme, the themers are solid and evocative. And that latter quality is always a plus. But then, what do we get by way of our matching grid-spanner? Can you say [okay… and I own up to saying this before…], “Déjà vû all over again”?

Fortunately, I encountered it only towards the end of the solve. Which allowed me to savor the [Sober?] UNLIT pairing; and to smile at the way I OWE and IOWAN made me remember the (kinda obscure) Rodgers and Hammerstein song “All I Owe Ioway” (from the not altogether obscure State Fair [which also gave us “It Might as Well Be Spring”]). Hugh Grant’s ABOUT A BOY (a Peter Hedges screenplay based on a Nick Hornby book) makes for good fill and it’s fun to see that first “O” crossed with EMOJI; ditto GLASS DOOR and its “O”-crossing MOOLA.

MNO? Also LOSABLE. And OMI? Huh? Okay—now I gotta get with the program! This [“Cheerleader” singer] is genuinely on the up and up, it’s just he’s entirely new to me (I know—you’re shocked, shocked. NOT). But Omar Samuel Pasley even promoted “Cheerleader” this past summer, appearing one night as a guest artist on Taylor Swift’s tour. Need I say more? “RAH!”

I suspect that one of the reasons there’s not a lot of sparkly fill in the grid is that the theme density makes it difficult to place it in there. Too many constrictions from the themers (leaving the constructor with weak fill-options). I think that last week’s puzzle suffered from a surfeit of theme density as well (though the theme execution there was superb).

I’m givin’ a pass today to AAA [Top bond rating]. Why? I just saw 2015’s (superb) mortgage-industry-fraud films The Big Short and 99 Homes. And (a few weeks ago, the 2010 documentary) Inside Job. Harrowing stuff, all. Let us never forget!

And on that kinda ominous note, I leave you. Keep solving, come back next week—and peace out!

If you’re a little confused, it’s okay. Alan Arbesfeld is here to clear things up.

I was confused by the title on this one until well after I finished the puzzle. My first inclination on seeing the title was that the string AHA was going to be involved. Nope. The theme answers all have one thing in common, an appended IE. So how does adding IE give us clarity? Well, how about if I write it like this, “i.e.”? Id Est, Latin for “that is”—used when providing a clarifying restatement.

So IE is added at the end of the phrase, giving us the title of the puzzle.

Nice idea. In each instance, the base word’s meaning is changed completely by the addition: BIRD to BIRDIE, GROUP to GROUPIE, etc.

I love the wordplay which brings so much opportunity for humor. In cases like this, the clue is crucial to providing that humor. Unfortunately, most of the clues today don’t quite do it for me. Let’s take them one by one.

Of course, I know that what I find funny won’t be funny to most or even anyone else. So YMMV.

The rest of the puzzle is solidly made of course. Interesting that Alan didn’t put the 11-letter themers (PLAY GROUPIE and SILENT NIGHTIE) as the first and last in the grid. They could have gone in the third and thirteenth rows thereby spreading all the themers out and giving him more leeway. Instead he put the 13-letter themers in the fourth and twelfth rows putting them in closer proximity to the other two themers. Still, he got it to work and made a solid grid out of it. Not much gunk that I can see. 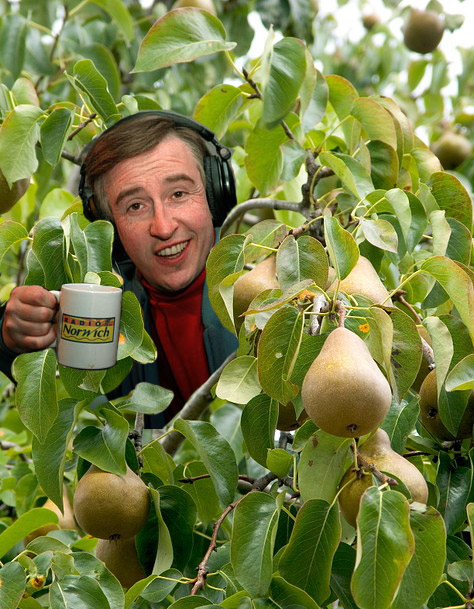 Alan Partridge in a PEAR TREE

I love PEAR TREE because my surname (Peredo) means “PEAR TREE orchard” in Galician, plus my brother and his family live on PEAR TREE Lane and are therefore known in our family as the “PEAR TREE Peredos” (the PEAR TREE PEAR TREE Orchards, I guess). Also great is DR RUTH right atop NIGHTIE. How’s that for serendipity?

SEMI-RURAL (10D [Only somewhat built up]) strikes me as a bit roll-your-owny. The rest of the long Downs are not exactly exciting (WATER PIPE, PROMISING, AUDITIONS, TABLE TOP), but solid.

Instead of a video, I’ll end this post with a question. 48D is RHYME. The clue is [Quart, for short]. I like the misleading clue, but does “quart” really RHYME with “short”? Discuss. Hello there, everyone! How’s everything? Today’s crossword puzzle, brought to us by Ms. Lynn Lempel, was a pretty fun one to solve and had a pretty cool theme. In it, each of the five theme entries follow the same pattern: a common phrase and/or proper noun in the English language in which the first word is an animal (possessive) and the second word is a body part.

Seeing a good them unfold makes the solving experience so much better, and that was the case with this puzzle for me, even after a pretty slow start up in the Northwest. Wasn’t able to come up with CIRCA when reading it’s clue initially, and only came to me much later when going back up there (1A: [It shows doubt about your date]). I know caves can be made from ice, but I don’t think I’ve come across the term ICE CAVE too many times (24D: [Freezing-cold chamber subject to collapse]). Actually, I think there’s a famous ice cave in Idaho that I heard of once from a friend who’s from Idaho, now that I’m thinking about it. (It’s that phenomenon again, where I say that I haven’t heard of or come across something, only for my mind to almost immediately be jolted into action and think of an example of the thing I just said I hadn’t come across! Make it stop!) Speaking of things you don’t hear a whole lot, there’s MOO-COW (9D: [Tot’s milk source]), though seeing that will always make me think of a Looney Tunes episode with Tweety and Sylvester. “Hello moo-moo cow.”

“Sports will make you smarter” moment of the day: LEAGUE (53A: [Group of teams]) – Current free agent Brandon LEAGUE is a relief pitcher who has spent the past 12 seasons in the Major Leagues. Known for having one of the hardest sinkers in the game, League’s best season came in 2011, when he recorded 37 saves while playing for the Seattle Mariners and was named to the American League All-Star team for the All-Star Game. He’s currently a free agent after missing all of last season with an injury and being cut by the Los Angeles Dodgers.