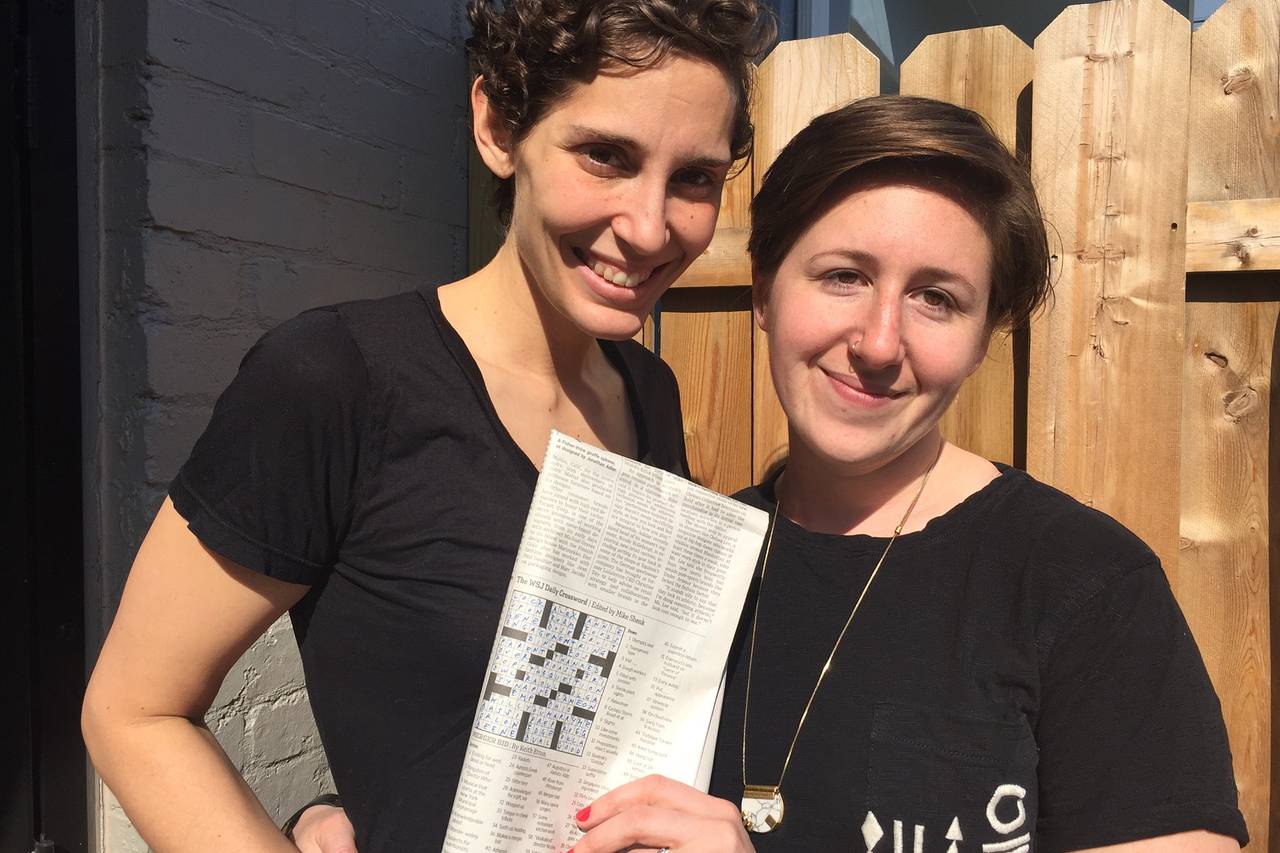 Last Tuesday, editor Mike Shenk ran a puzzle with a WILL YOU MARRY ME? theme. You can see my review here. In it I questioned whether or not it was an actual marriage proposal.

I discounted it because I couldn’t find any particular names that stood out. But I did note some unusually challenging sections that could’ve been easily repaired, hinting that there was something else going on.

There was in fact something else going on. It was in fact an actual proposal from crossworder Annie Barrow to her girlfriend Alexis Lockwood. You can read all about it in this story from the Journal.

Note that proposee ALEX is at 5a with her surname broken up between LOCK at 1a and WOOD at 64a. Also, proposer ANNIE is at 9a. Further, Ms. Lockwood’s nickname OWL is at 40a. Other theme terms, PIZZA and BLEECKER, had to be ditched due to grid constraints.

According to the story, Ms. Barrow approached Mike Shenk in February—two months ago. That must have been a very tense two months for her. But it all paid off!

Best wishes to the happy couple. May they have many more years of solving puzzles together.

Thanks to Mike Shenk for cluing me in once the story ran in the paper.

This brings to four the number of known marriage proposals in crosswords. I knew about the Washington Post in 2011 and the London Times in 2015. I didn’t know about the Boston Globe in 2007. Now add the Wall Street Journal in 2016.

Edited to add: Looks like I was way off on that four number. Peter Gordon contacted me to tell me he himself proposed in a puzzle that ran for the Creators Syndicate in March 1998. Just prior to that, in January 1998, Bob Klahn (who also created the WP puzzle in 2011) built one that ran in the NY Times. You can read about it here.

But wait, there’s more! I’m an idiot for not checking cruciverb for WILL YOU MARRY ME. It turned up six puzzles including the two I just mentioned. The two most recent ones don’t appear to be proposals, but one by Randall Hartman in Feb 2006 for CrosSynergy and one by Nancy Salomon in Jun 2006 for the LA Times seem like they could be.

And the list goes on. BEQ did one in 2014 for another same-sex couple on his site. Here’s one by Francis Heaney that ran in The Onion in 2008 (scroll down for Amy’s review); I’m not sure if it’s real or not, though. And Jon Stewart famously enlisted the help of Will Shortz to create a custom-made proposal-puzzle (which I am now officially dubbing a “propuzzle”) that is not to be found online.

I’m sure there are others, but that’s enough research from me.

This entry was posted in Daily Puzzles and tagged Keith Etton, Mike Shenk. Bookmark the permalink.