Wow, this felt really easy for a Thursday puzzle. I thought of Jack Frost for 1d. [Nose nipper], and 14a. [Brother’s place, informally] being FRAT confirmed the F and persuaded me to enter {JACK} as a rebus in square 1. Four {JACK} rebus squares in all (JACKASS/JACK FROST, JACKPOTS/JACK CHEESE, FLAPJACK/LUMBERJACK, and CARJACK/PHONE JACK), plus the 6d/48d revealer, JACK IN / THE BOX. I also kept hitting gimmes in the fill—particularly novelist RONA Jaffe, actress Jessica BIEL, playwright Eve ENSLER, gospel legend MAHALIA Jackson, actress AVA Gardner (clued, alas, as a wife-of-Sinatra rather than by her work), and the classic Lucy Lawless lesbian badass TV character, XENA the Warrior Princess. Thank you, Susan, for including mostly women in your grid—it’s a nice switch from the usual.

Additional bonus points for NUTELLA, which is a lovely entry but a “food” whose ingredients list appalls me, and SEA TURTLE.

Could’ve done without fill like OYEZ, OREL, and A MAJ., but certainly I’ve seen more junk in puzzles that don’t have eight rebus answers in the mix. That is definitely my fastest Fireball time ever. The last two have been murderously hard. This one is smooth and easy as ice cream. Yum.

“Troika” suggests that we’re in Russian territory, and the first theme answer confirms it.

The sisters are MASHA, IRINA and OLGA. A nice, solid theme, if remarkably straightforward for a FB. There’s no notepad (I checked) and I don’t think I missed anything this time. I’m sure one of you will tell me if I did.

What I didn’t know before I did this puzzle: see above about two All-Star Games and Supergirl’s birth name, KARA.

If I’m not mistaken, this marks Alex Eaton-Salners’s first puzzle outside of BuzzFeed. Let’s see what he has in store. By the time I got down to FIVE___, and looking at the title, I deduced correctly that we were talking about PRIME numbers. And yup, there it is at 55d with the clue [Amazon offering, and a hint to a replacement in the starred clues].

Turned out I really needed the revealer, because I wasn’t sure what was going on with the second half of each themer. The phrases have all had the word PRIME replaced by an actual PRIME number. It appears to be random as to which phrase goes with which number. Actually, it’s not random, it’s dependent upon letter count and symmetry.

There aren’t that many PRIME phrases, so to get them to be symmetrical with the numbers (in order, mind you) is pretty impressive. Actually, that’s really impressive the more I think on it. The only other phrase I can think of is “PRIME real estate,” and you can’t really put a number on that.

But the fact that they result in adjectival phrases left me a little flat during the solve. And I don’t really get the impetus behind it. Why are we replacing PRIME with a number?

Still, it’s a nice, solid puzzle with lots of good stuff like: PENGUIN, SLY FOX, CHAT UP, I’M SORRY, NEMESIS, PHLEGMY, DICTION, TEL AVIV. But I could do without: ELBE, TAV, OF AN, SUAVER.

Good clues: [Cooling off period] for AUTUMN, [One who poses no risk of flight] for PENGUIN, [Katherine Hepburn’s acting gamut, per Dorothy Parker] for A TO B, [De Soto or Hudson] for CAR (trying to make you think explorers, there).

But what I really want to talk about is 21d [Its largest city is Dededo]. Obviously, to anyone who’s lived in Dededo (such as me), the answer is GUAM. But this clue drove me to distraction because (1) I thought it wasn’t true and (2) I didn’t think Dededo (pronounced “deddy-dough”) could ever be called a “city” by any stretch of the imagination.

I was 7 when I lived there, so you can forgive my frame of reference. I had thought Dededo referred to the small neighborhood where I lived, but looking at the map, it really does encompass a large area (30 sq. mi.). Thanks to my bro-in-law and Google Maps for setting me straight. 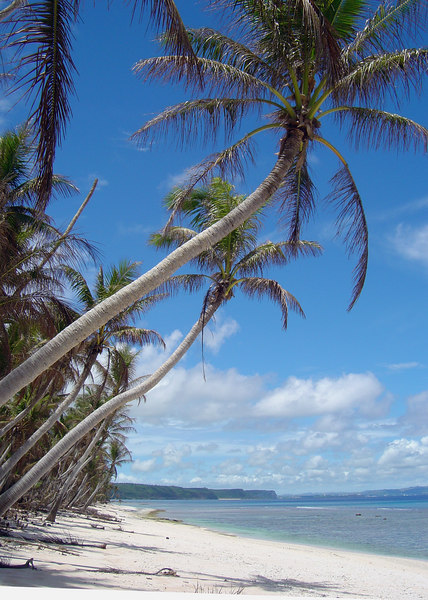 However, I still contend it’s not a “city.” At most it’s a town, though every website I’ve looked at, from Wikipedia to Guampedia, calls it a village. Truth be known, most of the land area that makes up Dededo is either jungle or military installations.

Fun fact: Dededo is home to the Micronesia Mall, the largest shopping center in the Western Pacific, in which you’d find a pretty large Rube Goldberg machine.

I couldn’t find a personal pic off-hand to share with you, so here’s one I got of the ‘net. It’s of Urunao Beach in Dededo, GUAM. I hope you enjoy gazing at it longingly as much as I do. Today’s BEQ puzzle was not my favorite, to put it lightly.  I’m not a huge fan of quip puzzles, but this had the potential bright spot of being a quip from Amy Schumer, who I’ve found funny since she first appeared on Last Comic Standing years ago.  Here’s the joke the rest of the puzzle hangs on:

I can’t find the clip where she uses this full joke, but enjoy more of Amy’s standup from her SNL monologue above.  Here’s the thing – in the context of a full bit about Amy’s experiences with LA and Hollywood’s body image standards, it’s hilarious, but on its own, it doesn’t feel like it has the same oomph. The other thing that brought this down for me was the fill quality in the rest of the puzzle.  The grid (and quip) didn’t feel particularly constrained, so it didn’t make sense why OOO is in the puzzle (especially clued as “Queenside castling notation”, which gave me no help at all).  Other fill that made me go “Really, Brendan?“:

I had to go get myself some more coffee to make sure I wasn’t being too cranky about the above.  I promise there were things I liked in this puzzle, too!  KIDS R US was a fun bit of fill (43D, “Bygone children’s clothing retailer with a backwards letter”), even if the rest of the puzzle was a LOSE-LOSE (22D, “Like situations with no good outcomes”).

Hope to see you at the Indie 500 this weekend! STOP and its anagrams (OPTS is missing today) are one of the better known sets. The visual execution and revealer today make the theme above average for its type, even though the four answers are seven letters. So we have FOUR/WAY/STOP and the four seven-letter themers meet in the centre, forming a four-way stop. We have: thePOST, TOPSpin, teaPOTS and SPOTify (fresh answer!) making up those themers.

The short themers are shorter than many other answers in the puzzle: AEGEANSEA and ROMANGOD form a Mediterranean mini-theme. We also have the astonishingly now largely abandoned ASTRODOME. INCOGNITA is not a word commonly used in English, but it’s holding a fair bit up in the grid! SOILSTAIN is more peculiar: I can figure out what it’s supposed to be, but I had no idea that was a phrase!

Lastly, did anyone know you could use DOPES as a verb?? Apparently you can dope something out now?? Hello from San Francisco! I hope you’re doing well. Going to have to be short with this blog, but that definitely doesn’t mean I’m selling this puzzle – brought to us by Ms. Donna S. Levin – short at all. Have any of you heard the little running joke that made up the theme in this puzzle? Can’t say that I had before.

Kind of embarrassed that, after a few crossings, put in “mole hair” instead of NOSE HAIR (5D: [Manscaper’s facial target]). Hey, the former seemed not too, too far out of the question, right?. I will admit right now that I have both TRIPP, Monica Lewinsky and Paula Jones in my head right now after coming across the clue that referenced Monicagate (4D: [Linda of Monicagate infamy]). You couldn’t stop seeing all of those women somewhere on your TV screen back in the late 1990s. Now I need to make sure their images go away from my mind ASAP right now!! If you are sick of the “dab” move that has taken the world by storm over the past year, put a lot of blame on CAM, who popularized the dance late last year when doing it after almost every touchdown he scored during Carolina’s run to the Super Bowl (28A: [Newton about whom Panther fans give a fig]). Now you’re lucky, as I was going to save that clue/entry for the next graph, accompanied with a video of unhip people who are completely devoid of dancing rhythm doing the dance and thinking they’re cool. But I will post a video of one of my reporters getting photobombed by a person doing the dance while she was doing a postgame interview. I edited the video so it would start near the moment in question. Look closely!

“Sports will make you smarter” moment of the day: NOLE (5D: [Gator rival, familiary]) – I knew that the clue was referencing the University of Florida Gators sports teams, but, ended up thinking of a team in their league, the Southeastern Conference, to fill the answer in. Finally, my mind kicked in, ditched “mole hair,” and I could finally see that it was going to be NOLE, short Seminole, the mascot of Florida State University of the Atlantic Coast Conference…and longtime rival to Florida.

Thank you for the time, and I’ll see you all tomorrow! TGIF everyone!