Today we are looking for a Hall of Fame athlete, certainly appropriately as we are in the thick of the Rio Olympics. Given a strong clue from the title, I assumed all the entries strongly related to a color were part of the theme set:

So my first idea was to consider each pair of colors as team colors of the four teams this Hall of Fame athlete played on. I was strongly influenced by the blue (when I considered “clear skies” to be blue) and orange of the first pair, suggesting the team colors of the Denver Broncos. The two Broncos in the Hall who came first to mind were John Elway and Shannon Sharpe, but following the careers of these two didn’t seem to jive with the three other color pairs. (Elway only played professionally with the Broncos and Sharpe only played one season with the Ravens between his two stints with the Broncos.) 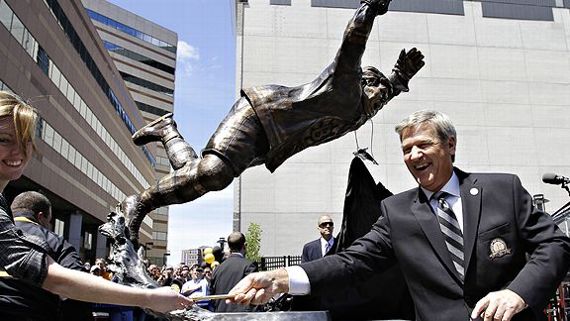 Reading the first letters of these colors from top to bottom, you get Bobby Orr, a NHL Hall-of-Famer from my home town of Boston. (In fact there’s a statue of him in front of the old Boston Garden where he played.) I’d like to think the constructor considered the connection between the four “pairs” of theme colors and Bobby Orr’s famous jersey number, but maybe that was just serendipitous. Nice find that all the letters of his name start the names of primary colors.

OTOH, this meta seems a bit unsettling with some of the theme entries being things that are famously a certain color (I’m looking at you Smurfette!), but others that are just a shade of the primary color (tangerine, lemon, cherry, turquoise), even if this latter set are clued to something other than the color. Hard to pull off with so many theme entries and perhaps this is the best that can be done under the constraints. Also, does this athlete have any unique connection to colors? I’ll just pick out one clue that made me smile, notably at One Across: [Source of Starbuck’s orders] for AHAB, of Moby-Dick.