This week we’re in search of a well-known European landmark. The Eiffel Tower came to mind at first, but I wisely decided to actually solve the puzzle before submitting that answer.

So what are the theme entries this week? Seems we have four that are arranged in a pinwheel fashion around the grid:

As you can see above, each of these entries has the word DOME inside of them, nicely split in four different ways. But are there more? The title hints at counting them, so there may be more than four. Indeed, observant solvers can find five more occurrences (I’ll omit the clues):

So what European landmark has nine domes in total? Well, it’s none other than St. Basil’s Cathedral in Moscow, famous for its ornate nine onion domes which apparently are arranged like a star when viewed from above. 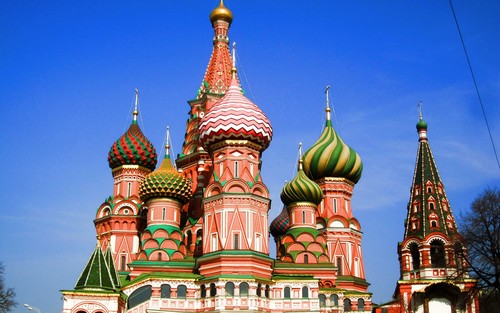 A fun meta, and nicely executed with almost perfect symmetry of the nine dome occurrences. The entry AMNIOTOMY threw me for a bit of a loop (I’ve heard of “amniocentesis” but not this). Having it cross the similarly obscure (to me, anyway) RANDOME seemed a bit unfair, but it was helpful that I guessed the crossing entry was theme-related.