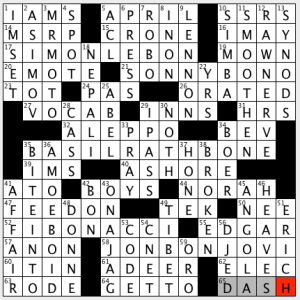 Nupe. The title is not a reference to the marines or to Aaron Sorkin’s play about the marines. Instead, in a theme-rich puzzle, it celebrates five men whose names include the letter sequence B-O-N, which adds up to 42D. BON [“Good” to a francophile…]. Each of the five themers is starred today, and two pairs of ’em overlap each other in the grid. Additionally, each of the clues specifies that francophile’s particular fave, as in [Francophile’s favorite…]

I think this is a great crew of guys, but wish the pronunciation of BON were consistent, Mr. (long “O”) RATHBONE being the main outlier. Nice, though, that we get the discrete BON in the first and last entries.

Nice, too, the long downs of BITE INTO and RAW NERVE. But talk about VOCAB, how about the fill that abuts them, namely AMOEBOID and SMOOTHEN respectively. The first is a 50-¢er for [Asymmetric, like some basic organisms], inferrable if tough; the latter, rather poetic in a 19th century kind of way, no? Got the SMOOTH- part easily enough, but it took me a while to be confident about how to complete the word. I like both of them, just think they may be tough for newbies. Especially when the clue for SMOOTHEN, [De-crease] is part of a matched set, since we first encounter [De-crease?] as the clue for PRESS.

As for mid-range fill, we get loads of sixes representing a lively cultural mix: religion SYNODS, science fiction authors (Isaac) ASIMOV, classic film roles MR. MOTO, geography and language ALEPPO, ANGOLA and NEPALI, epigrammatic rock icons LENNON [John who said, “Reality leaves a lot to the imagination”]. Plenty to FEED ON here! Ditto ORATED and ASHORE, and especially AFFAIRS and ON A JAG.

There’re also other examples along the lines of those paired [De-crease] clues that work to unify the solving experience. But this time it’s two colloquial turn-downs and one equivocation by way of “I’M SET” [“No more for me, thanks”] and “I PASS” [“Not me”], and “I MAY” [Noncommittal words]; and the parallel cluing for two markers of time, [60-min. units] and [52-wk. periods] for HRS and YRS. If you didn’t know it before, I’m a great fan of this kind of “internal glue.” Now ya know!

And now I take my leave for today. Hope all’s well enough in your world as we continue to navigate the new world order. The puzzles can make for a fine constant to balance the stresses of the day. So… you know the drill: keep solving and do stop by again next week! Today, Tuesday, Septembaaarrr 19, 2017, is International Talk Like a Pirate Day, mateys, so we aaarrr thus privy to a pirate theme:

And an entry I just made up that is not in the puzzle:

Hey Laura, aaarrr you going to say anything about the rest of the puzzle, or is your entire post going to be pirate jokes? Aye, the fill, ye scurvy dogs: I’m not a tremendous fan of prepositional phrases, such as WAIT UP, HINTS AT, and TROD ON — just saw LETO (as in Jared) in yesterday’s BEQ and thought, “LE TO? like IN TO? UP TO? Is LE a new gender-neutral preposition I don’t know?” — but they can help out. GIANT FIR [34d: Tall tree of the Pacific coast] felt a little green-paint-y, but that is apparently the common name for Abies grandis. Loved random trivia like [43a: White Rabbit’s lament]: I’M LATE, [53a: Letter before Quebec in the phonetic alphabet]: PAPA, and [31d: Global traveler Nellie]: BLY.

“I answer hard acrostics, I’ve a pretty taste for paradox…” I’ve seen silent-letter themes before but I don’t think I’ve seen one with SILENT PARTNER (57a. [Nonactive member of a firm … or what G, H and W each have in 20-, 29- and 49-Across?]) as the revealer. Here, each theme answer has two words, each of which contains the same silent letter.

There’s something enormously pleasing to me about the juxtaposition of HAGGIS and PORSCHE. I don’t know why. Themeless fun today. If I am counting correctly, this only has 66 words! There are super wide-open sections in this one, but nothing too overly obscure. I knocked it out in about 5-6 minutes, and after perusing the grid over, I am in awe of the relative easiness of the answers. Again, I learned a couple of words/terms/names, which I will mention below, but all had crossers that were simple enough. I have said it before, and I will repeat it: Matt is a genius at this, and his grids are some of the most enjoyable to solve. I would only say that about 10-12 people, and he is certainly in that class, in my opinion. 4.4 stars today.

See next week for another Jonesin’! I haven’t done a Matthew Sewell puzzle since, oh, Saturday! This one is definitely a lot easier than his Saturday Stumper constructions! He doesn’t disappoint, either, with the trademark LAT revealer smack dab in the middle:

From crosswords, we are all familiar with the ONE-A classification; I am not sure I have heard much of this other end of the spectrum. I was a tad young during the draft dodging years, and now I am old enough to be able to say the if they conscript me now, we are losing BADLY! A nice 78-worder that is a relaxing change from the weekend toughies. 4.2 stars.

Everyone have a great week, and I will see you on Saturday for another LAT puzzle.