Editor Mike Shenk (“Really Mike” anagrams to “Marie Kelly” for newbs to this feature) offers to shake things up a bit this week with a puzzle that asks for a five-letter word. There are two long entries in the across direction which I wasn’t at first sure if to include in the meta material, but given their relation to each other, I was inclined to do so:

But then there were some fishy things going on with some other shorter across entries:

So I assumed the idea of these three sequences of across entries were to be taken as a whole, but since the title was “Break Downs,” I first wondered if I should look at the down entries that began at the black squares where these entries were broken. Seems like that was a dead-end, but it took me a while of staring at this one to be certain. I also wondered how three groups of entries (or clues) would lead me to a five-letter word, but I (à la Sen. Elizabeth Warren) persisted. 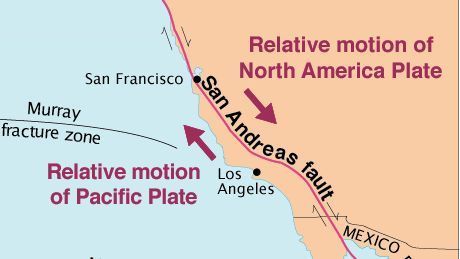 It wasn’t until I looked more carefully at the middle of the puzzle, did I see SAN/AND/REAS staring back at me. Hey, that’s a fault line, I thought–made a lot of sense given the title and the 2 California entries, but what other faults are there in California? With a bit of research, I uncovered CA/LAVE/RAS and EL/SINO/RE; the latter being a bit more familiar in name than the former, but only a smidge so. Once I found those, I figured FAULT was the five-letter word I was looking for.

I thought this a nice visual meta; one can definitely imagine those black squares representing the fault lines where the names have been broken. I would say, though, that this is one of those “magic eye” metas–either you see it or you don’t, and it’s much more likely one would recognize the middle fault than the other two I would think. I’ll close with one of my favorite clues in this one: [Boring item] for BIT. Nothing boring about that inspired clue!