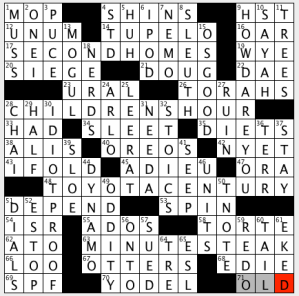 What we have today is a very straightforward kind of theme and execution. If, because of that, the theme plays as less than fully-satisfying for the experienced solver, it’s pretty much spot on for newbies. Each of the four themers gives us a two-word phrase in which one word is also a measure of time—but used here in a non-time-measurement context. There’s some humor to be enjoyed in the clues, all of which end with a question mark, because of the punny use of “timely” appearing in each. Comme ça:

Thus we get a second, an hour, a century and a minute. I wish… the theme set were tighter/more consistent, that (for the sake of internal elegance) the “time” elements appeared from shortest to longest (or vice-versa), and that century were swapped out for day—because that big leap from hour to century is hard for me to make sense of in this short sequence. So. Not a most exemplary theme set. Imho. But: I found there was a lot to like in the remainder of the puzzle, and this is where the real gold is today. Imho.

For starters, those two long downs: the vernacular and colorful IDIOT-PROOF, clued self-deprecatingly with [Simple to use (even a crossword constructor can figure it out)]; and its grid-opposite, the high-dudgeon and equally colorful [Cry of indignation] “HOW DARE YOU!”

Then, there were a lot of clue/fill combos that kept the solve a lively one—because of the associations they produce or the evocative vocab they present, or the way they made me think twice, or just because they felt so right.

Again, if the execution of the theme missed the mark for me, the remainder of the puzz more than made up for it—and there are more gems to be mined there as well. Hope your solve was a good one—and that you’ll keep solving. Until next week, I bid you a fond “ADIEU”! I feel like there’s some slippage — as we used to say when I was a BOOKWORM in English class — between literal and metaphorical in these themers. A SAWHORSE is something that you would literally see in a shop class; the suggestion of a SEX KITTEN, even though this one’s metaphorical (or rather, literalizing a metaphor), being a TEACHER’S PET, in, say, a high-school health class seems insensitive, to put it mildly, at this (or any) cultural moment; in POOL SHARK, POOL here means billiards, not the thing in which one is NATANT [58a: Floating or swimming], so it’s the only truly metaphorical one; and finally BOOK WORM — ok that one works for me. What?! How is the theme revealer not SPLIT-LEVEL? I saw four kinds of houses split (A-FRAME, RANCH, DUPLEX, CHALET) into staggered levels in those circled squares, but the revealer is 57a. [Like most pet dogs … or a hint to this puzzle’s circled letters], HOUSE-BROKEN. I guess it would be an architectural violation to have that RAN/CH house be called SPLIT-LEVEL.

Nothing else is thematic, and with those houses split across entries and not clued, the whole thing played like an unthemed puzzle. Took me a hot second, but I had this theme figured out after just a couple of long answers filled in, and I even had an idea of what the revealer is at 56A! I wish I had remembered to have the timer on in Across Lite (sometimes it just doesn’t start when I am on my MacBook), since I think I had a really fast time! Here is what is going on with these ”jokers”:

The jumbled letters in the circles are all of the face cards from a deck. My only quibble is they are out of order, but then I guess that makes them even more wild! Nice execution, even if the theme has been done before, which it seems as if it has, but perhaps not quite like this. 4.3 stars. This theme didn’t appear to me until after I finished solving. I think I must have solved a lot of the bottom section by the down answers, because I don’t even remember seeing the revealer!

I knew there was something odd about this puzzle: it is 15×16! Always nice to see a slight variation in the size, especially if that is the only way to fit your theme entries in. Not sure if that is the case here, but again, when you solve tons of 15×15 puzzles, one or two with a different size are more than welcome. Still jammed through this in under 4 minutes, so maybe that is why I didn’t notice the final theme answer! Even though my time was quick, this still played just a tad tougher than a normal Tuesday. 4.1 stars for this one.

That is all for today! Have a great week.