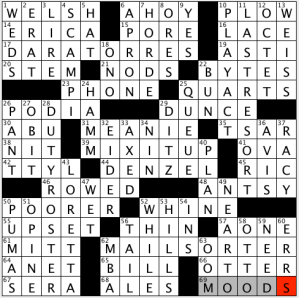 If you’re an experienced solver, you probably recognize that the word jumble in the title is code for anagram. And if you’re a newer solver, you just learned something that is also reinforced for you right in the middle of the grid with the reveal at 39A. [Tussle … or an alternate title for this puzzle] MIX IT UP. Love that phrase. It’s colloquial, it’s lively, it tells us how to make sense of the theme. The letters that get the Jumble treatment are in (the non-word) ORSTER which—after we mix ’em up and put ’em back together in response to the clues—appear as:

Now, with the exception of Ms. TORRES and the reveal (two genuinely strong entries), I can’t say that I’m equally 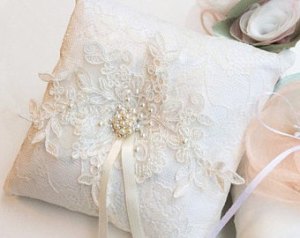 enthusiastic about the remaining themers. They absolutely satisfy the requirement of being anagrams of one another, but (for my money) fall on the not-so-lively end of the fill-spectrum. That said, I hafta add that I still had fun solving this one. Probably because of its mini-thematic internal connections. Like the one that’s timely in light of the recent nuptials across the pond, to wit: [Gets hitched] WEDS, (traditionally) vowing to do so [“For richer, for POORER…”], and where LACE [Frilly pillow trim]—and the pillow itself—could show up with the ring-bearer. Will the couple seal their vows with a heartfelt “YES!” [“You bet!”]? Let’s hope so! 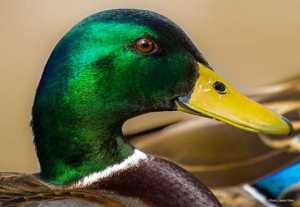 Then there’s the pairing of the adjacent folks-to-be-avoided: tthe [Unkind person] MEANIE and the [Despot] TSAR; and the D-joined duo of dodos at 29A. and -D., the DUNCE [Ignoramus] and the DITZ [Bubblehead]. There’re even two side-by-side water animals, one clued with reference to a distinguishing physical characteristic: BILL [Mallard’s feature]; the other to its behavior [Playful river critter] OTTER. (Oh, gosh—and I almost missed [Duck down], which is not an instruction to take cover but is the clue for EIDER.)

I’m not gonna WHINE [Be a crybaby] or dwell on the fact that today’s grid doesn’t allow for lots by way of additional longer or even mid-range fill. This is my own NIT [Petty peeve]. Still, PLAY-ACT [Be insincere, in a way] and SCAMPI [Shrimp recipe] do stand out. As does Liz’s cluing style, which keeps things decidedly fresh today and spruces up the shorter fill, by drawing on a wide range of “liberal arts” interests: contemporary novels/authors [“Fear of Dying” author Jong] ERICA (the nearly 45-years-later, flip-side of Fear of Flying); historical books/authors [Churchill’s “WHILE England Slept”] (England in the pre-WWII years, published in Great Britain as Arms and the Covenant); classic Hitchcock [“Dial M for Murder” prop] PHONE; classic rock [“Without A NET” (Grateful Dead album)] and [Burns or Ocasek] RIC (so contemporary documentarian, too, for the former…); classical music [String piece written by a 16-year-old Mendelssohn] OCTET (I mean, what were you doing at 16??).

Question-marked clues, too, keep the solve twisty and entertaining, so thank you [Fly catcher?] for (baseball) MITT, [“Bye” lines] for OBIT and especially [Talking points?] for PODIA, the plural of podium, the place/point from which a speech/talk might be delivered.

My “bye” line? Today it’s also a [Texter’s “bye now”] or “TTYL.“ Hope you’ll have a great week ahead and that you’ll stop by again next week. In the meantime: keep solving! Three seemingly unrelated entries have something hidden inside! Whatever could it be?

Here’s my [39a: Provocative opinion piece]: HOT TAKE: instead of male-editor-constructed-female-pseudonymed puzzles in the WSJ, how about ZB constructs all of them? I could solve her lovely, elegant early-week puzzles every single day without complaint.

Not much to say about the fill; ICE BAGS seems a little roll-your-own, and I didn’t know there were multiple SEABEDS — isn’t there just a SEA BED that is continuously under all the seas? Did you hear that Hasbro has trademarked the smell of [12d: Kids’ modelling medium]: PLAY-DOH? Speaking of distinctive scents, remember [6d: Green shampoo]: PRELL? (Is it still available?) I used to think grown women washed their hair while fully clothed and wearing makeup, and it was amazing to me that they didn’t get any lather or water on their faces. Then they would have hair that was fluffy and manageable. “Don’t hate me because I’m beautiful!” Neat astral theme: The constellation URSA MAJOR, which is Latin for GREAT BEAR, includes a set of seven stars commonly called the BIG DIPPER, which points to the NORTH STAR. Connect the circled letters in alphabetical order to trace the constellation; extend an imaginary line in the sky in the direction from star F to star G and you can find the North Star. Handy for seafaring.

With the seven circled letters needing to contain A B C D E F G in very specific places in the grid, plus the four 9s, the fill winds up a bit of a mess. There’s a lot that feels tough for a Tuesday puzzle: INURE, ESO BESO, Indo-ARYAN, contrived ON DOPE, LAO, ENOLA, HESS, plural LYES, RONDEL, ARABY, SERGE, SERE, BUTENE, and ORBIS? Heck, I’ve placed in the top 10 at the ACPT and some of these were wildly unfamiliar to me!

3 stars from me. The theme is cool but the fill wasn’t up to its level. 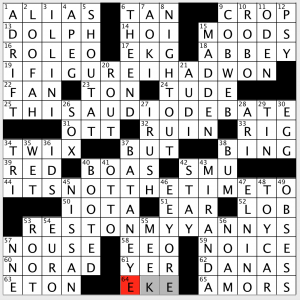 One of the advantages of having an independent puzzle in wide circulation is the ability to turn current events around quickly into crossword themes. I believe Will Shortz is usually several weeks out with his process between acceptance and publication, whereas the topic referenced in the quip cited in this puzzle was literally LAST WEEK! The quip reads: I FIGURE I HAD WON THIS AUDIO DEBATE, BUT IT’S NOT THE TIME TO REST ON MY YANNYS! I love it! Yes, the yanny/laurel debate set the internet on fire, much like that crazy dress from a few years back (which I swear is still white!) I don’t get the craze with this one, since I heard clearly BOTH words, and it just depends on the tone of the recording you hear. It was nice to see Ben Zimmer (crossworder!) on the nightly news explaining this phenomenon! I had a big grin on my face when I got to the end of this one! Bravo, Matt! 4.8 stars today!

Some other high points: 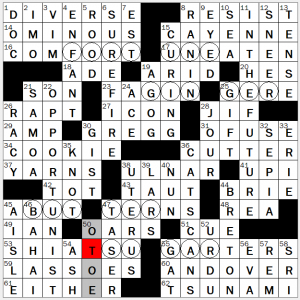 This is another one of those puzzles that is making me hungry!

This puzzle is almost exactly symmetrical with the hidden cookies! The first two entries spell fortune, the next two ginger, the next two butter, and the final pair show sugar. (I suppose they are technically ginger snaps, or gingerbread cookies, but we won’t nitpick!) It is probably almost impossible to accomplish that feat, but this minor fact doesn’t detract at all from the solving enjoyment. This puzzle still has 78 words in it, which surprises me since there are lots of 7-letter entries in the four corners. Let me go find some cookies now! 4.4 stars.

Have a great week, and I will see you all on Saturday!