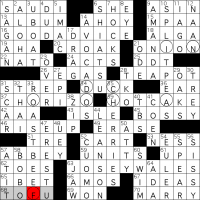 hello and welcome to episode #520 of matt gaffney’s weekly crossword contest, “Work Your Way Up”. for this week 3 puzzle, matt challenges us to name a two-word phrase. okay. what are the theme answers? it’s not immediately obvious—there are no long answers in the grid, and the two longest (GOOD ADVICE and JOSEY WALES) turn out to be non-thematic—but there are a whole lot of foods.

the next step is quite easy to see if you’ve circled all the foods in the grid, and quite difficult otherwise: the food entries form one continuous path, each food intersecting exactly two others (except for the first and last foods in the path). so you just take the letters at the intersections of the foods, starting from the bottom and working your way up (as the title instructs). these intersections spell out FOOD CHAIN, which is the very apt answer to the meta.

i liked this meta! it seems so simple once you get it, but it’s quite constrained as a construction, as the letters have to appear in order, and they have to be shared by multiple foods. i suspect matt started out trying to make the foods occupy symmetric positions in the grid, but found that it just wasn’t working out. (i’m pretty sure that with a central black square, it’s not possible for the path to be symmetric if you stipulate that the path can’t cross itself.)