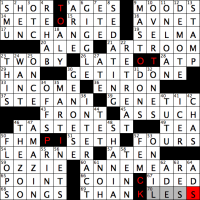 hello and welcome to episode #521 of matt gaffney’s weekly crossword contest, “Dressed to the Nines”. for this week 4 puzzle, we have pete muller pinch-hitting for matt during a difficult week. pete challenges us to name an object used in some constructions. what are the theme answers? there aren’t any obvious ones, but there is a two-part clue that echoes the instructions: {With 52-Across, objects used in construction} are TWO-BY / FOURS.

along with the “nines” in the title, this is a strong nudge, but i just couldn’t get anywhere with it at first. i was certainly looking at the nine-letter entries in the grid (UNCHANGED, GET IT DONE, TASTE TEST, ANNE MEARA) but couldn’t find anything to do with them. i wanted to split them up into a pair of fours plus one more letter, but there was no obvious way to do that.

there are also other numbers in the grid: {Individuals} ONES (which is actually kind of a dupe with {Indie film with the Best Original Song of 2007} ONCE), and {Conf. for George Mason or George Washington} A-TEN, an informal way of denoting the atlantic 10 conference. but those didn’t go anywhere either.

coming back to it a few times, i tried again with the 9s in the grid. TASTE TEST has the same four letters (TEST) twice, plus an A. that’s certainly 2x4ish… but the other 9s don’t work like that. maybe you could make ANNE MEARA by joining two 4-letter words in the grid and adding one more letter? well, you can’t. not only that, but it would be absolutely insane to try to put four 9-letter words, eight 4-letter words, and TWOBY/FOURS itself into a single 15×15 grid. it’s just too much theme content.

however, once i had that realization, i was able to see the right thing to do, which is just to disregard the 9s in the grid and turn pairs of 4s into a 9 with the addition of one letter—but not stacked pairs. instead, it’s two 4s separated by a black square in the grid. in each of the 8 places where this occurs, you can add a letter in the black square (with no anagramming) to make a 9-letter word:

i’ve included the added letters in the screenshot above. reading from top to bottom, they spell out TOOTPICK. and of course, TOOT and PICK are a pair of four-letter words that can take a central H to become TOOTHPICK, an object used in some constructions. i like the idea of imagining the four-letter words as marshmallows, with the added middle letters being the toothpicks joining them together. fun!

this was a really cool meta. it feels like it’s been a very long time since we’ve had a meta mechanism where you add a letter in a black square, which is perhaps why it took me so long to see this one. but it was well-hinted and very fair. slight demerits for the dupes that i mentioned, plus some ungainly fill in places (the ALY/A LEG/ARNE and A-TEN/TENN/FEM sections, where the theme content was densest, were not pretty), but overall this was a fun solve. and for me, this landed perfectly at a week 4 difficulty, although having it occur during the week and with one day less to work on it amped up the stress.

thanks for the meta, pete! how’d the rest of you like this one?