This is a smooth, solid themeless. It is not blazingly hard, and I enjoyed it anyway. 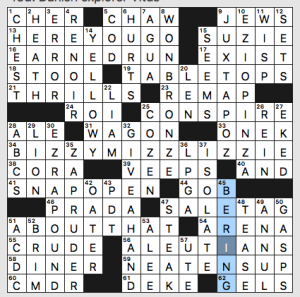 I think I had an advantage in the NW with two medical clues. I suspect all of you knew that 1d [Stethoscope target] is CHEST. 14d [Somewhat icteritious] is trickier, especially since “icteritious” is not a word I’ve ever heard. I think Peter made it up to go with YELLOWY. That may be the first time that an entry I’ve never seen before was a gimme. “Icterus” is the Latin (from the Greek) term for “jaundice,” a yellow discoloration of the skin and eyes seen most often in liver disease. There’s also a baseball clue, so I was off and running. 16a [One of up to three in a quality start] is EARNED RUN.

This is a very Scrabbly puzzle!

What I didn’t know before I did this puzzle: see above re: JUXTAPOZ. I also didn’t know that EZIO PINZO appeared with Lana Turner, nor did I know that ZAPRUDER was a dressmaker.

I leave you with this, inspired by 21a.

The Thursday NYT took longer than a themeless Fireball. I think this is mostly due to the lateness of the hour…

Our theme answers appear to be nonsense – but they are nonsense that can be parsed in a specific way. 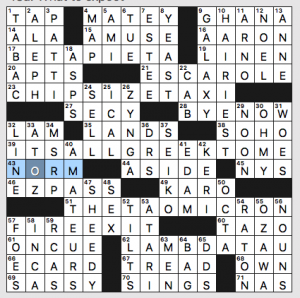 What’s the connection? Let’s look at 39a [What you might say upon seeing 17-, 23-, 51- and 62-Across?] IT’S ALL GREEK TO ME. We can re-divide the themers into Greek letters: BETA PI ETA, CHI PSI ZETA XI, THETA OMICRON, LAMBDA TAU. Maybe I’m just tired. This theme didn’t wow me. CHIP SIZE TAXI made me smile.

What I didn’t know before I did this puzzle: that ATARI has an online-only museum.

I’ve been a fan of Paolo Pasco’s grids since he burst onto the scene a few years ago. While the theme here isn’t complex, it eluded me for much of the solve due to solid, thorny cluing throughout. Wrangling this one into submission was a fun process.

The theme is revealed at 65d, [Business abbr. that’s inside the theme answers]. We’re looking for added INCs in the long Across answers. 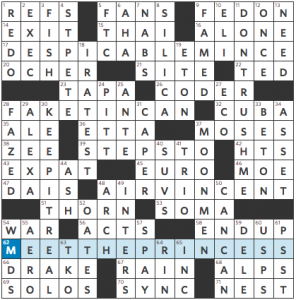 I didn’t get a whole lot of humor from these, but they feel solid enough. “Business Insider” is our impetus, I guess, for inserting INC within phrases, but it still feels odd since we usually see INC added on at the end of a company’s name. 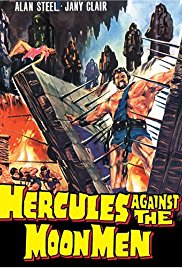 The long Downs are really fun today with KEEP IT REAL [Slangy send-off] and DON’T RUSH ME [“Be patient!”]. However, I struggled with the latter because it was looking like ___TRUST ME for a while. I also love MOONMEN (37d, [Hercules fought them in a 1964 B movie]). Click the image to watch the MST3K crew watch the entire film.

IRATEST was the irritatingest of the fill. I also had trouble with STEPS TO (39a, [Challenges, in slang]). Is that something the kids are saying these days because it sounds awkward? SOMA (53a, [Body of an organism]) is another less-than-stellar bit of fill made harder because I’ve never seen it without a Brave New World clue.

As I said, cluing was thorny and ambiguous, but in the best way. Here are some of the ones that struck me:

That’s all I have. This one provided a good Thursday challenge mainly due to the crunchy cluing. 3.4 stars from me. 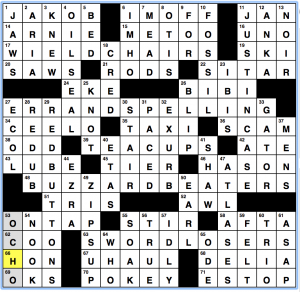 It’s BEQ time!  This is going up later than expected, but it’s been one of those weeks over here.  BEQ seems to be back in form with this week’s entry, “Can You Field It?”:

A phonetic “D” sound has been added on to WHEELCHAIRS, AARON SPELLING, BUZZER BEATERS, and SORE LOSERS to get the theme entries.

enjoy some Gumby and POKEY 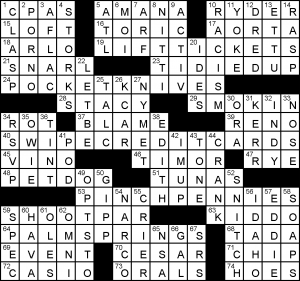