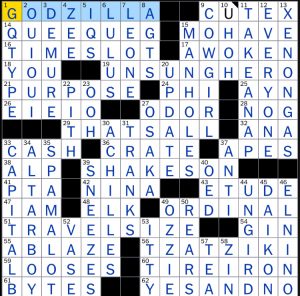 Nate here, stepping in to cover the Saturday New York Times puzzle while much of Team Fiend luckily finds themselves at the Indie 500 crossword tournament this weekend. Jealous! But also rooting so hard for everyone. We can’t wait to hear all about it!

Umm, did I luck out getting to cover a great puzzle or what? Such a smooth and lovely grid. I was able to finish it about nine minutes faster than my Saturday average, which I’ll certainly take. Was there much of any crosswordese in there at all? So much gorgeous, fresh fill and so little crud. #constructorgoals Certainly a lovely way to spend twelve minutes on a Friday evening.

Ok, that’s all for now. Have a great weekend and a wonderful start to LGBTQ+ Pride Month!

The theme is completely telegraphed by the title, but for the most part, the theme entries work nicely. ID is removed from common phrases. 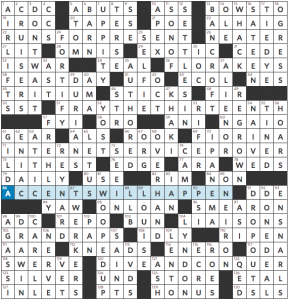 Fill-wise, it’s kind of a hot mess. I really like a lot of the long fill, and those NW and SE corners are really nice. But there’s some really iffy stuff in here.

First, the good. AIRLIFTS, CRUISERS, and “DON’T WAIT” start us off in the NW. In the SE we have DROPOUTS, DONE DEAL, and ENSNARLS. Pretty good. BANCROFT, DURIANS, SWOOPED UP, OVERHAND, IPANEMA, AUTHORED, FEAST DAY, LIAISONS, UPPITY, SELFIE, and TWERKERS. All good.

But things like LITHEST, RIFER, SST, ADC, AARE, ODA, and plurals HOARS and DSLS took away from the fun. Rougher still were the very uncommon proper names: HONUS, NGAIO, stacked FREHLEY and REYNARD, and YOST, although we’ve seen the latter a number of times in different grids.

Overall, I enjoyed this solve, but it would have been so much nicer without some of that clunky stuff. 3.4 stars. Have a good weekend everyone, and good luck to all tournament solvers. 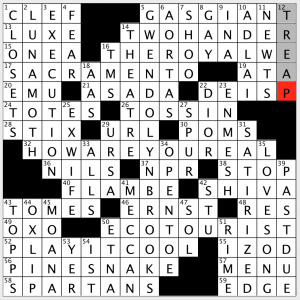 erik again! (Lowercase on purpose; read his blog!) Wishing I was at the Indie 500, but I have put off a lot of extra-curricular activities until I finished my Masters in Accounting, which I did complete just this past Thursday! Now I can get caught up on several things I was behind on, as well as planning excursions. I went to the Indie a couple of years ago, and I am seriously missing the pie!! Next year for sure!

Seeing Erik’s byline is always a treat. His brain just works differently than the rest of us, and with him being so young, he could easily end up as one of the best constructors we have ever seen. (If he isn’t already!) He is already cemented a name as THE best solver, and unless something drastic happens he could have a streak of wins at the ACPT for a while! This puzzle is again full of typical Erik fill; lots of interesting stuff, and at least to me he makes fill seem easy. 4.4 stars today.

I could go on, but I just bought the at-home Indie 500 puzzles, so I will be anxiously watching my email today! Have a great weekend everyone! 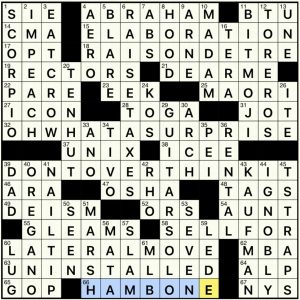 Not horrible! I thought of my ten minute goal while solving this, but it was too late, since I was solving on my iPad this morning and it is typically a tad slower. This one went fairly smoothly, and you can see there are no error marks this time! There is something about solving these Stumpers on a quiet Saturday morning while laying in the bed; it is similar to the quiet of the extreme late night for solving. I am sure I am not the only one who appreciates these peaceful, calming conditions in this hectic life. A solid 4.5 stars for Matthew’s puzzle today.

Just a few highlights, including the 15s:

Hope everyone is having fun at the Indie 500! I will be buying the at-home version if I haven’t already!