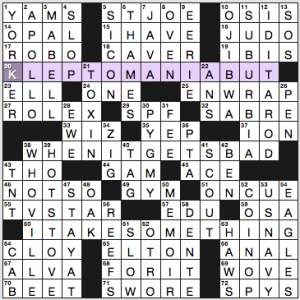 Well! A quip theme. I rarely ever like puzzles with quip themes. This one is I HAVE / KLEPTOMANIA BUT / WHEN IT GETS BAD / I TAKE SOMETHING / FOR IT. As Dr. Erin tweeted, “If you have to make a quote puzzle, might as well go all out and pick a joke about mental illness.” Wikipedia tells me that SSRIs and a few other drug classes are used in the management of kleptomania—and these are not the sort of meds that “you take when it gets bad.” They’re daily maintenance meds.

It being June 6th, we are presented with an appropriately-titled puzzle. Common phrases have Ds prepended. 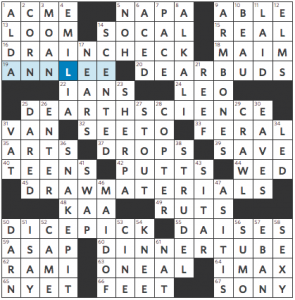 That’s a lot of theme material, but most of it missed my funny bone. I got a chuckle out of DINNER TUBE in a sophomoric sort of way. If you’re having hot dogs for dinner, at least take a step up to brats or any of the myriad specialty sausages that are out there.

Didn’t care so much for long partial MAID OF, plural DAISES (which just looks weird), nor the crossing of proper names EMILIA [Iago’s wife] and ANN LEE [Founder of the first U.S. Shaker colony]. Thankfully, the L makes sense there, but still…

Did I mention STRUDEL?! See the video for a quick way to make it. 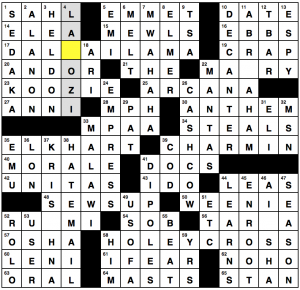 As for the puzzle, “Sacred Spaces” is a pretty good hint at what’s going on in the grid.  There are four places in the grid that feature religious figures crossing one another, with one square not used.  In the upper left, we have DALAI LAMA (“Religious figure whose picture cannot be legally displayed in the country of his birth”) and LAO ZI (“Noted philosopher of Daoism”), in the upper right, ABRAHAM (“Father of the Jews”) and MARY (“Annunciation figure”), in the lower left RUMI (“Sufi philosopher, poet, and mystic”) crossing KRISHNA (“Deity in the Bhagavad Gita”), and in the lower right, TARA (“Noted Bodhisattva in several religious traditions”) intersecting with AISHA (“Noted Muslim scholar and wife of Muhammad”).  All of these are HOLEY CROSSES. Ba dum tish.

I thought the execution of the theme was okay, but the fill itself felt a little homework assignment-y in places.  That’s largely on my own awareness/knowledge of religious figures outside of the context I grew up in, but I felt like I needed to google some stuff even with crossings filled in. 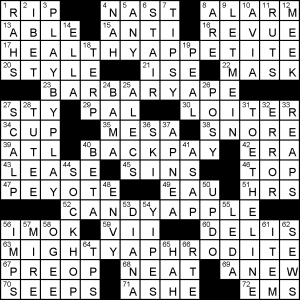