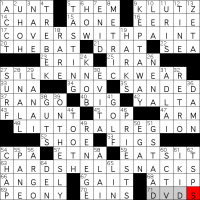 hello and welcome to episode #522 of matt gaffney’s weekly crossword contest, “Theme and Variations”. for this week 1 puzzle of guest constructor month, we have joshua kosman, classical music critic for the san francisco chronicle and co-constructor of the cryptic crossword in the nation. i tried to do this puzzle without the instructions and, more or less, failed, though in retrospect, it was eminently gettable and i felt pretty dumb for not seeing it. what are the theme answers?

okay, so we have a theme and variations. what’s the theme? presumably some other arrangement of those five letters. i couldn’t think of anything, really. the best i could come up with was “costa”, as in costa rica or the surname of various soccer/tennis players i know, but that’s just spanish for “coast” so more or less a dupe. so i gave up my quixotic week 1 conceit and glanced at the instructions: This week’s contest answer is a frequently performed opera. immediate facepalm. not only should i have been more focused on classical music to begin with (considering both the puzzle’s title and its constructor), how many times have i entered puccini’s TOSCA into a grid? even the victorien sardou play on which the opera is based, LA TOSCA, is borderline 7-letter crosswordese in certain themeless grid patterns.

it would have really helped if i’d noticed the parenthetical comment at 20-across, {English translation of “Die Fledermaus” (which is not the answer to the meta)} THE BAT, because it would have tipped me off to the fact that we were looking for an opera. oh well. that’s what i get for solving too quickly.

this is a nice week 1 meta. i am normally not super-excited about themes where the long theme answers are, more or less, “clues” with arbitrary and stilted wording, but these felt fairly smooth. i love the word “littoral”, so that helps. the title is also perfect, playing on the musical notion of theme and variations by extending it to the crossword definition of theme, with the variations being anagrams. this puzzle, with its “hidden” theme, was kind of the crossword equivalent of the enigma variations, except much, much, much easier.

that’s all i’ve got for week 1. thanks for the puzzle, joshua!

This entry was posted in Contests and tagged Joshua Kosman. Bookmark the permalink.