Fireball is a contest this week, so you’ll find the review on Sunday after the deadline. 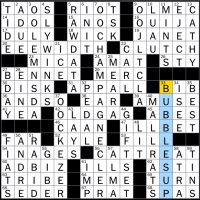 So I’m solving this, and I know there’s something wacky with the long downs, and everything’s referencing 33d, so I hop over there, figure it out, stick the bubbles up at the top (wouldn’t carbonated beverages have CO2 at the top, not O?), and I’m still stumped by what 7d is supposed to be for the longest time. I get the gimmick (you gotta have a gimmick) but it wasn’t fun (unlike carbonated beverages, which are indeed fun — in fact, I’m enjoying one right now, a OGUINNESSSTUT). Also, 3d and 9d took the bubbles from both words in the entry’s base phrase, while in 9d they were only from the second word, which felt inconsistent. 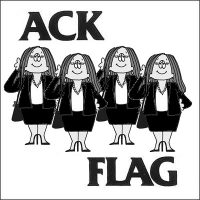 Anthropomorphic animals are taking over. Phrases that describe certain people are altered (by adding a single letter) to represent certain animal sounds. The animals themselves are present elsewhere in the grid. 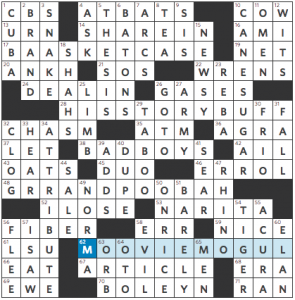 I wasn’t sure how I felt about the theme while I was solving. To be sure, these aren’t new puns and the jokes are equivalent to what you might find on a kid’s cereal box…literally.

But once I started imagining a townful of animals running the place, I came to feel the theme had a certain charm. In a word, cute.

Except for the first one. It’s fairly inconsistent with the others which have second words that are related. POOBAH and MOGUL are almost synonymous in my mind. A BUFF isn’t quite the same thing, but is still an expert in some fashion.

Contrast these with BAASKET CASE which 1) is usually pejorative about someone suffering some mental instability (and mirrors the word “Crackers” in the title in an unfortunate way), 2) doesn’t describe an expert or bigwig like the others, and 3) requires a pronunciation change from the base phrase (unlike the others).

But, that being said, I imagine the theme set was hard to come up with, especially if trying to get the second words to be related. BUZZ and PURR might provide alternatives, but then maybe not. Ooh, how about [Major League 69-Across?] for BAALL PLAYER?

Ok. Well. Aside from the first entry’s inconsistencies, I like the theme. And including the animals themselves in the grid made sussing out the theme a mite bit trickier and put more constraints on the fill. It’s a nice touch that the animals are also symmetrical in the grid and that two of them cross theme entries themselves.

With all the theme entries and constraints, it’s not surprising that there isn’t anything too sparkly in the fill. CANE SUGAR is nice; ATTRIBUTE is just sturdy. The central BAD BOYS makes for the flashiest non-theme entry.

RHINO is in the grid and probably shouldn’t be in a puzzle whose theme is about animals. WRENS as well. I would have tried to remove them. There’s food for the animals to EAT, though: OATS ON RICE provide a lot of FIBER. The SNAKE can eat the WRENS I suppose, and the TIGER can eat all the other animals…or MEN if it likes.

Favorite clue absolutely has to be [Times up] for AT BATS. Sadly, it’s not new (it’s in the cruciverb database), but it’s still a perfect example of the beauty of a well-crafted clue.

Other goodies: [Leading indicators?] for BATONS and [Catch some waves?] for HEAR.

And then there’s [Double rainbow’s makeup] for ARCS which prompts the following video (which is now eight years old!). 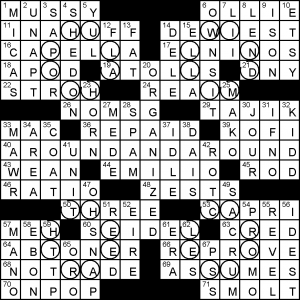 I looked at the grid, and at the circles, and knew the fill was going to be, to use a traditional English phrase, a balls up. The degree of challenge when your theme makes circles like that is extreme, and it never makes pleasant solving. Those corners are already big. The circles spell out HULAHOOP, WINDMILL, THEEARTH and CAROUSEL.

One corner has MICAS/UNAPT/SHEDON/CAPELLA/APOD. APOD is ridiculous; as a partial, it may be barely tolerated but ONPOP and IFNO represent the two partial LA Times maximum. DNY is the most desperate of desperation fill I’ve seen in a while. 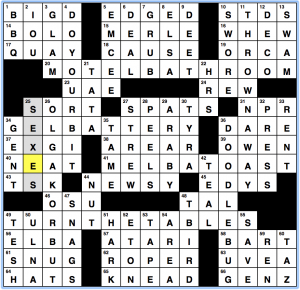 This week’s BEQ is called “Counter Revolutions” and it goes a little something like this:

Each themer has the word TABLE turned inside of it.  Pretty straightforward.  I had THE BATES MOTEL for 20A before I caught on to what the theme was, and learned that a GEL BATTERY is a thing.