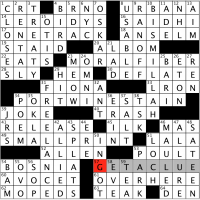 It’s our F(r)iend Gareth! We at the Fiend are always pleased to blog one of our own.

Any novice constructors out there looking for a solidly executed example of a classic theme-type, look no further, and use this puzzle as a model of the thing where you have four seemingly unrelated phrases with a clincher of a revealer. Well done, Dr. B.

Fill-wise, we have a few entries that shout, I am a puzzle printed in the Chronicle of Higher Education: [14a: Lalo opera based on a Breton legend about a flooded city]: LE ROI D’YS; unusual avian vocab [53a: Young turkey]: POULT and [60a: Stilt cousin with a curving bill]: AVOCET; a six-letter [18a: Canonized archbishop of Canterbury] who is neither BECKET nor THOMAS but ANSELM; FIONA clued vis-à-vis Brigadoon and not Shrek.

Favorite clue: [34a: It “begins as a lump in the throat,” per Robert Frost]: POEM. Makes me think of Emily Dickinson, who had a similar reflection on the embodiment of language: “If I feel physically as if the top of my head were taken off, I know that is poetry.” 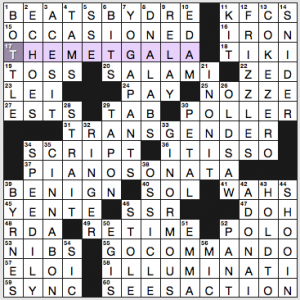 Lots of extra-tasty crispy fill in here, and I’m not talking about the plural KFCS. I like BEATS BY DRE, the verb OCCASIONED, THE MET GALA (at pub trivia a few days after the Gala, our team name was Pope Rihanna), TRANSGENDER (Happy Pride Month, everyone! I see you, I support you, I vote for people who will protect your rights), pretty PIANO SONATA, GO COMMANDO, ILLUMINATI (Q: What’s the Illuminati’s favorite pizza? A: Deep-dish from Lou Malnati’s.), CINNABON, YOGA PANTS, GINORMOUS, FRIZZLES, and COKE ZERO (though it’s unfortunate that this was the base for a theme answer just 24 hours prior).

Not so keen on the ACES IT, TAP ON (the clue doesn’t work so well because you generally tap someone on the shoulder, not just “tap on a shoulder”), IN ON IT, SHOO-IN, and IT IS SO, with all the ECHOES of 2-letter words. Also bored by LEI clued as [Romanian currency units], plural abbrev ESTS, POLLER (yeah, the word is pollster), plural interjection WAHS, old abbrevs SSR and RDA, RETIME, ELOI, and variant EGIS. 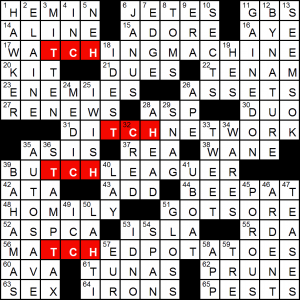 I like the basic conceit of this puzzle. SH’s change slightly to TCH’s and we get new, wacky phrases. The effect is actually quite pleasing when you say the answers out loud. Today’s answer set is WASHTCHINGMACHINE, DISHTCHNETWORK, BUSHTCHLEAGUER and MASHTCHEDPOTATOES.

A lot of one-and-a-half word phrases today: HEMIN, BEEPAT, GOTSORE, GAINEDON, BYNATURE (I really liked that one, especially after changing it from INNATURE, which I was squinting at…), SEEMSOK.

[Fine art and antiques, say], ASSETS; those are mighty upper class assets. For most of us, it’s more likely a car, some white goods and maybe a house (which the bank owns more like).

[Org. offering puppy love?], ASPCA. I work at a similar kind of organisation, an Animal Welfare Society, here in South Africa. Had a rough week trauma-wise; two puppies with crushed skulls, a small dog with its jaw ripped off, another with bite wounds that they left for a week and now the whole leg is full of “gangrene”, some seriously awful mvas, and I’ve actually lost track of what else. It’s been that kind of week… So that’s the flip side of puppy love.

[Bit of winter wear], MITTEN. For must of us, more effective in the plural.

[Two-faced god], JANUS. After whom January is named.

[Global sports org. concerned with wickets], ICC. A gimme for me, and probably any US solvers of South Asian or West Indian heritage, the International (previously Imperial) Cricket Council. International Criminal Court would probably have broader recognition.