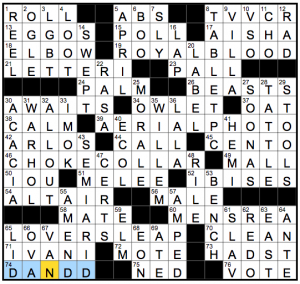 That said, today we get a word ladder containing ROLL / CALL / VOTE [With 44- and 76-Across, way to put legislators on record … or the start, middle and end of a word ladder]. I won’t bother listing clues for all the steps in the word ladder because they’re all of the form [Second word in the word ladder], but we get ROLL / POLL / PALL / PALM / CALM / CALL / MALL / MALE / MATE / MOTE / VOTE. PALM and CALM are just there to make the word ladder symmetrical, as you could just go from PALL to CALL. The most impressive thing about this puzzle is that every four-letter across entry is thematic (all 11 of them!), which is really hard to do in 78 words… which is partly why this one gets an extra column and goes up to 81 words. (Also, to have a central four-letter entry, the puzzle needs to have an even number of columns.)

All in all, I did not enjoy solving this. I hope you felt differently! Until next time!

Janus is the Roman god of the threshold. He is usually depicted as having two faces to show his connection to the passage of time. 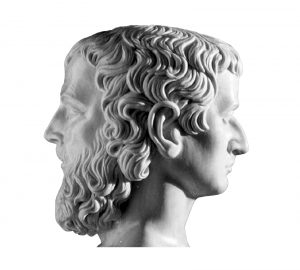 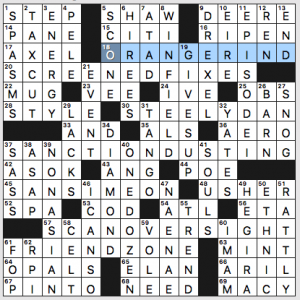 The theme answers in this puzzle are all two-faced. They incorporate words that are their own opposites – known as Janus words or contronyms.

It’s an interesting use of a linguistical oddity. There’s no wordplay in either the clues or the answers. Since the answers are not in the language, the clues have to be straightforward. They seem a bit too obvious for the FB, though. There was a tiny aha! moment when each one fell into place, but overall it felt too obvious to be much fun.

The rest of the fill is more interesting than the theme answers. That’s mostly good, but not entirely.

I said some of it was not good. I was thinking of 61a. [Like, but don’t consider as a romantic partner, in modern slang] which is FRIEND ZONE. Yes, in theory someone of any (or no) gender can be FRIEND-ZONEd by someone of any (or no) gender, and the clue is scrupulously non-gendered. We all know the primary usage of this term, though. It’s het men who are FRIEND-ZONEd by the women who refuse to sleep with them even though the men are perfectly nice and don’t do anything wrong and don’t hit the women or anything like that, so of course they should get laid as a reward. FRIEND ZONE derives directly from the idea that heterosexual men are entitled to sex with any women they choose, and those of us who hold the radical idea that we have autonomy and can choose our own sexual partners are at best castrating bitches and at worst victims of violence. This is the language of the misogynist hate group called “incels.” Language matters. Normalizing this crap by using it in puzzles and pretending it’s not gendered is not a good look.

DAB’s back and he’s taken the phrase “Singled Out” and re-parsed it as “Single-D Out.” That is, he found two-word phrases where the first word ends in D and the second one begins with a D. In each case, he removed the second word’s D to humorous effect. 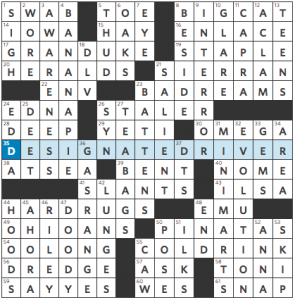 I didn’t chuckle too much at these, but neither did I grumble. COLD RINK feels a little too on the nose, but HARD RUGS is funny, DESIGNATED RIVER makes for a nice grid-spanner, and I enjoyed imagining what “The GRAND Old UKE of York” nursery rhyme would sound like, especially given its new sense of alliteration. On the whole, an enjoyable theme.

And the long fill is equally enjoyable, thanks to a theme set that consists of only a 15 and four 8s. My favorites are BANANA PIE, MINI MARTS, EVOLUTION, GAS RANGE, BIG CAT, SAY YES, PIÑATAS, and SALIENT. Those NE and SW corners are huge (5×6) and there’s nothing at all bad in them (partial A CLAM and so-so ENLACE are the worst of it).

All in all, a clean and clever puzzle to end the regular solving week. I’ll put it at 3.7 stars. 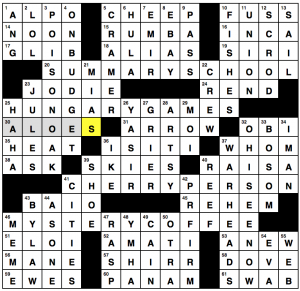 Don’t take the title of this week’s BEQ Thursday literally – he immediately mentions in the accompanying blog post for this puzzle he’s not stopping any time soon – but do take it figuratively.  It’s a key to what’s happening in the theme answers.

Quick fill rundown: IS IT I never quite works for me as an actual thing people say outside of crosswords, I was hoping “TV Actor Scott” meant ADAM, but it’s actually BAIO, SCROD is a lie, and OH I SEE NOW felt real tenuous as far as fill goes. 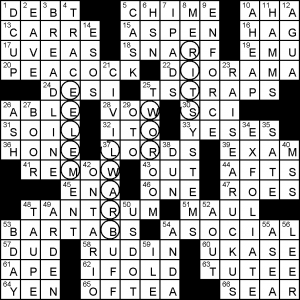 Fill was frustrating, in part because four 12’s caused the theme to be too crowded, as in the RUDIN/USDOT/IFOLD/OFTEA/ANDA/ILE pile-up. However, I can’t fathom a reason for AHEAP/HAMMS/AGUA.