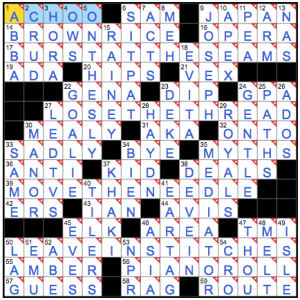 Pro tip: if you only have one day to take off from work when your kid is graduating, and the graduation is in the evening, take off the day after. This post might not be sewn together as well as they usually are.

You can tell I’m tired when I make jokes like that. Our theme answers all have a common thread (dang. There it is again).

A theme tailor-made for a Wednesday.

What I didn’t know before I did this puzzle: that HAYDN is known as the “Father of the String Quartet.”

I leave you with Papa’s work:

Our theme today is “This Little Piggy” with TOE as the revealer (52d, [Digit associated with the starts of this puzzle’s five longest answers]). Each of those answers start with a keyword from the Mother Goose rhyme: 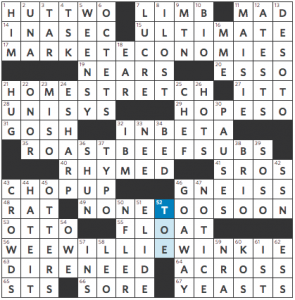 This is a theme I should like. As a stay-at-home dad, I’ve played my fair share of “This Little Piggy.” I may be biased but I tend to think fairy tales and nursery rhymes make good fodder for puzzles since they have wide popularity. Even people who don’t have kids will have some familiarity with such things, assuming they were kids once.

But what turned me off to this theme was the title, a groan-worthy pun on Will Smith’s 90’s hit “Gettin’ Jiggy Wit It.” Maybe it’s just a simple pun, but it feels like a cultural misstep. Worse, like a dated cultural misstep. You can actually google “Gettin’ Piggy With It” and you’ll find a bunch of T-shirts…and a bunch of white models wearing those T-shirts. And then there’s this (NSFW).

The basis of the theme I like. I couldn’t see what the theme answers had in common until near the end of my solve when I sorted out the revealer. I had a nice a-ha moment. (Never mind that the WEE piggy also went HOME or that ROAST BEEF SUBS feels “green paintish.”)

But I couldn’t get past the title. And even beyond that, there’s not a lot of sparkle and a lot more than the usual amount of crosswordese in the grid: MME, ESSO, ITT, ONOR, STS, INS, KOS, IST, ESS, A-TESTS, and NFLER. I do like ULTIMATE (the Frisbee game) and DIRE NEED, though. 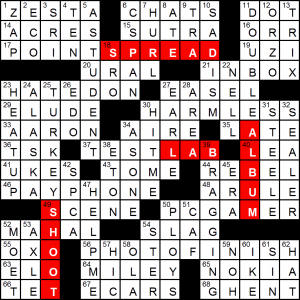 PHOTOFINISH is today’s revealer leading to a typical “words that follow theme”, with PHOTO able to precede SPREAD, LAB, ALBUM and SHOOT. PHOTO is able to complete the BOX of INBOX, and more tenuously, the PHONE of PAYPHONE, but these are not intended as themers (I assume). Between PHOTOS, a PAYPHONE and a DOUBLEALBUM this whole puzzle feels rather quaint. 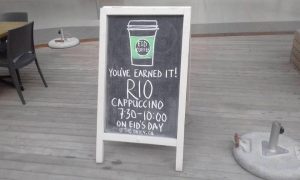 This answer repeats frequently in puzzles, but is probably only known in the States from its Vietnam War connection. I’ve never seen EID in a puzzle before, despite there being over 3 million Muslim Americans and it being on American Postage stamps. Eid Mubarak to our Muslim bloggers for the 15th. This photo is from the local coffee shop, and shows one of many public examples of advertising for the holiday here.

[Green vehicles, for short], ECARS. On the other hand, I can infer what this is supposed to be, but I can find little evidence that it exists in the real world.

[“Copperhead Road” singer Steve], EARLE. He has lots of great tunes. How about this one? 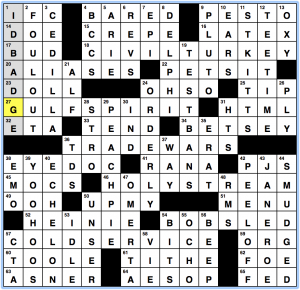 This weeks’ AVCX review is going up later than expected, but such is the glamorous life of the software engineer moonlighting as a crossword reviewer.  This week’s puzzle is from Erin Rhode, and it’s entitled “Switching Arms”.  Let’s take a look at how that plays into the theme this week:

That revealer makes everything clear – each of these themers begins with a word that could be followed by WAR (CIVIL, GULF, HOLY, COLD) and trades its partner (CIVIL SERVICE and COLD TURKEY, and GULF STREAM and HOLY SPIRIT).  It’s a Switcheroo!

Once I realized the “war” aspect to why these swaps were made, I really enjoyed this theme.  This felt very close to something that could easy fit into the NYT, but with just enough changes to feel like a better fit for AVCX.