I’m filling in for Amy while she’s away. I usually do the Saturday puzzle in the paper on Saturday morning while drinking a cup of coffee and I don’t usually time myself. Under seven minutes feels fast to me, and this puzzle felt a bit easier than the average Saturday.

It also played more like an indie puzzle than an NYT. I daresay, even without consulting a database, that there are two entries in here that have not previously graced the puzzle pages of the Gray Lady. I trust you all will correct me if I’m wrong. I’m thinking of NETFLIX ORIGINAL and EXCUSE YOU, both excellent additions. I suspect the fifteen-letter central feature was the seed entry for the puzzle.

Other things I enjoyed: 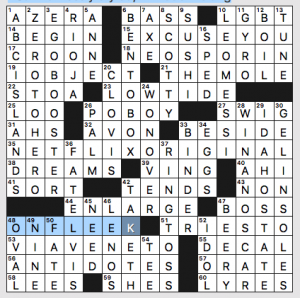 It’s a very Scrabbly puzzle. In addition to the aforementioned EXCUSE YOU, ZERO TO HERO  and NETFLIX ORIGINAL, we have AZERA, BENTO BOX and I OBJECT. I didn’t see a Q, so I don’t think it’s a pangram.

What I didn’t know before I did this puzzle: that Anderson Cooper hosted THE MOLE and that “Jay LENO’S Garage” won an Emmy.

About a month ago in these pages, I asked, “Does this mean we will be seeing a PA-inserted theme next month?” And here we are. 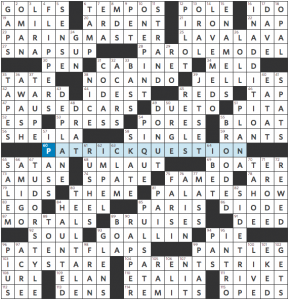 An okay theme, but after you get the pattern the first time, the rest is pretty straight-forward.

Further, there are unthematic PAs in the grid, including PAS at 94d [Dance step]. Also, PANT LEG, OPAL, SPATS, “I PASS,” SPATE, PAIL, and PARIS. I’m of two minds on this. As a constructor, I would try to avoid that bigram except in the theme answers, but as a solver, I can’t say that it was distracting. 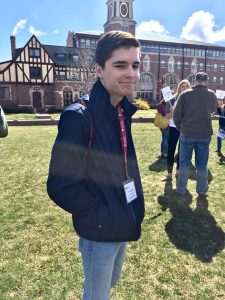 My high school grad (as of tonight) who will be attending U. of Denver in the fall which features some fine TUDOR-STYLE architecture.

On the plus side, the fill is much better than the MA-themed grid from last month. That one had a plethora of iffy fill and tough proper names. This one not so much. LAVALAVA (25a, [Samoan’s skirt]) is pretty unusual, but I think I recall seeing it in the WSJ before. What’s more, there’s “NO CAN DO,” JELLIES, GO ALL IN, ICY STARE, FLIPPERS, “LOVE ME DO,” SIDE TRIP, TUDOR STYLE (67d, [It incorporates decorative half-timbering]), and the nifty trio of HAUNTED, TELL-TALE, and PULSATE (though no POE or HEART).

As a matter of fact, I can’t really find anything in the fill that gives me pause. There’s the partial A MILE, but that’s it. Amazingly clean for a 21x grid!

Cluing is mostly straight-forward, but a few clever ones here and there kept it fresh. But since it’s almost time for me to get ready for my son’s high school graduation, I’m going to cut this short. Summing up, the theme is serviceable, but the cleanliness of the grid and fun fill make this one a winner. 3.7 stars from me.

Happy Father’s Day to those who celebrate! 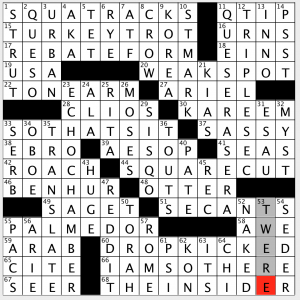 I don’t remember exactly when I solved this puzzle, but it was a relaxing time evidently, because I jammed through this one. 72 words in this one, and normally a word count in a themeless higher than 70 means the fill is better, and that seems to be the case here. When you get down to 70, 68, or even less entries, you’re forced into longer entries and maybe not always the best choices. This one seems nice and lively, but with the duo named in the byline I am not surprised! 4.6 stars this morning from me.

Enjoy the soccer! Have a great weekend! 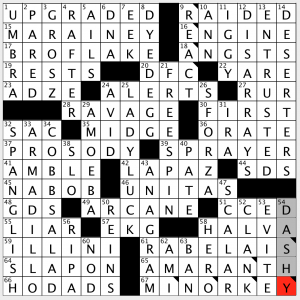 I awoke this morning, checked my Facebook, and saw a post by Erik Agard mentioning “a gorgeous stumper.” I couldn’t agree more. There isn’t an entry longer than 9 letters in the grid, so that usually makes these themeless puzzles a little easier. Usually. I got through about half of the puzzle in about 5-6 minutes, and I was excited to finally get close to my ten minute goal. Then it turned into a classic Wilber and I ground to a halt. Lower left was the easiest, but you can plainly see my error marks all over the right side of the grid. There are a few toughies in the grid, but it is a Stumper, after all! A solid 4.7 stars for this one.

I could go on, but the World Cup is on! I’ll leave you with this: