Registration is now open for Boswords, the Boston Crossword Tournament, Sunday, July 29 in West Roxbury, Massachusetts. Hope to see you there!

When Amy mentioned that she’d be out of town and needed coverage for the Sunday NYT, I was all [19a: “Pick me!”]: OOH OOH! It’s always fun to help out others on the Fiend team, and I am super thrilled to blog a debut while sitting on my porch this fine evening. You may remember Amanda and/or Karl from such puzzle outlets as last year’s MGWCC guest constructor month, Will Nediger’s blog, and the Women of Letters collection. As well, Amanda has her own indie puzzle blog where she regularly posts solo work and collaborations. Props to Erik for taking concrete, visible action to diversify crossword construction in continuing to support new constructors, particularly women, with collaborations — this makes at least the third published in the last year or so. 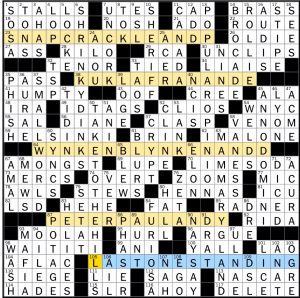 So, what does this tricky trio have in store for us? A handful of famous trios, with the third standing upward, and hidden in longer down entries, thusly:

The title says it all: the theme answers all have a sound that mimics the word “sigh.” 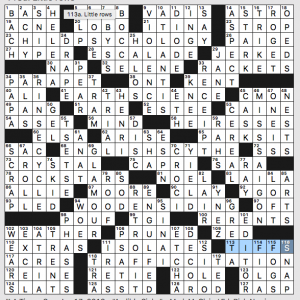 All the answers are in the language and all the clues are fair. I didn’t think it was much fun to solve. I like an “aha” moment and/or something that makes me smile, especially in a 21×21 crossword. Without that liveliness, it feels like a slog.

What I didn’t know before I did this puzzle: see above re: scythes. I also didn’t know that GLAMOUR Magazine was founded in 1939. 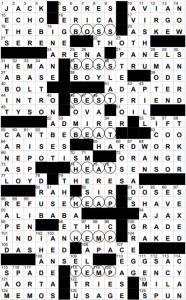 So, after Thursday’s NYT word ladder debacle, we open the Washington Post puzzle to get…a word ladder puzzle. A 15×26 word ladder puzzle, to be exact. Eight ten-letter entries either begin or end with a step in the ladder, which begins at the bottom of the grid as a TEMP, changes one letter at a time and finally rises to the top as the BOSS.

Two entries towards the center, HARD WORK and NEPOTISM, are both clued as [Reason why some move up the corporate ladder]. If only PRIVILEGE had eight letters. Being related to the BOSS gets some people jobs they would have not gotten on merit, but sharing certain characteristics with the majority of executives is a huge help, too.

I generally don’t love word ladders. but I like this one. The steps of the ladder are part of larger entries instead of boring standalone words, they actually have clues instead of [Part of word ladder], and the fill is up to its usual high standards. Not sure if it was worth losing over eight percent of the usual Sunday size, though.

“He Got Game” dropped 20 years ago. Here’s the sequel that needs to happen: “She Got Game” ? #BRMovies pic.twitter.com/Z0wDaZV2eW

First of all, let me say that I might be the wrong person to blog this puzzle, since I know very little about basketball players and their nicknames/catchphrases/what-have-you. I’ve heard of most of these players, but I don’t watch enough sports shows or listen to enough very excellent sports podcasts with people talking a lot about sports to be familiar with their nicknames. 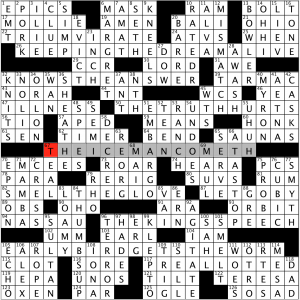 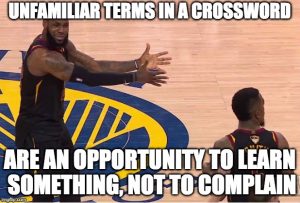 This is a cool theme concept since all of these players’ nicknames begin with the and they are common words that are found in familiar titles and idioms. I was apprehensive, but overall I’m glad to have learned all of this — there’s even an entire Wikipedia entry to help! Thank you, LeBron, for helping me meme my opinion on this matter.