Theme: The names of four major Norse gods are hidden in well-known phrases. Elsewhere, the gods are identified by name in the grid. 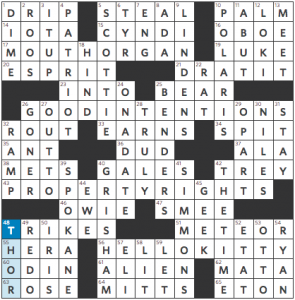 As is often the case, we’re not given a reason as to why the Norse gods are hiding out in these phrases. They just are. But that said, these are all strong, evocative phrases that make for a good theme set.

Note also that HERA (55a, [Wife of Zeus]) makes an appearance in the grid, crossing THOR and stacked on top of ODIN. Hey…no judgments here!

If you haven’t yet read Neil Gaiman’s Norse Mythology, I highly recommend it. Even better is the audiobook read by the author who has a wonderful voice for reading his own work. 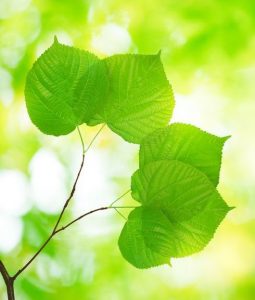 Heart-shaped leaves of the linden tree (photo by Getty Images)

Back to the grid. There aren’t any marquee long Down entries, but we’re given a clutch of 10 seven-letter answers, most of which are nice: SCOTTIE, POLARIS, SPOKANE, GRISHAM, LINDENS, etc. The one I didn’t know was THE TIME (42d, [Morris Day’s band that appeared in “Purple Rain”]). Apparently they were (and still are) a long-time Minneapolis group who associated with Prince often.

The rest of the fill is pretty standard fare with the exception of DRAT IT (21a, [“Aw, heck!”]). Did anyone ever really say that? And the partial IT UP is about as bad as partials get. The clue [“You could look ___”] is similarly awkward.

But other than those nits, this is a solid Monday outing with a straightforward theme and clean fill. 3.4 stars.

It’s late Sunday night and some miscommunication on our part here at the Fiend meant no one was covering this puzzle. So I will make this brief.

I guess since it’s Monday the clues are straight over the plate. I think I would have enjoyed it more if they were allowed to get a little more fanciful, but newcomers to crosswords probably appreciate the straight cluing.

It’s a nice grid with big, open corners. I like the MACADAMIA / WAIKIKI combo as well as SNAIL MAIL, SCRIBES, PASTIME, and PAELLA (which is fun to hear Brits pronounce as “pie-ella”).

Not so keen on AS SOON and CANNED IT in the past tense. I guess you could use the latter jocularly, and the clue itself does this [Stopped all that yapping], but it still sounds odd.

Let’s see a show of hands, who had SOUR for [Mouth-puckering] vs. the eventual right answer of TART? I am in the former camp.

That’s all I have. A fun and lively grid to start your work week. 3.5 stars from me. 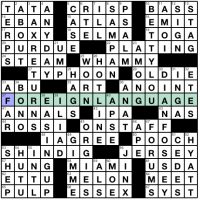 Hello from Krakow, Poland! I’m on a World War II retrospective trip across Europe, so this puzzle’s navigation of multiple languages is quite timely for me!

I enjoyed this idea for a theme, though it seemed a bit sparse when you consider that the revealer uses almost as many squares in the grid as all of the theme entries combined. It could be that there aren’t many other (or better) workable entries/languages, but 33 total theme squares in a 15×15 is really low.

I also have a tiny bone to pick with the revealer itself. Many schools have replaced a “Foreign Language” department with a “World Languages” department or something similar because the word foreign implies English as the default and any other language as an “other” (and, perhaps, an implied less than). I’m guessing that the many, many people who speak Hindi, for example, wouldn’t consider their language foreign. I bring this up because it’s important in any medium – including crosswords – to consider who we’re assuming our audience to be and, in that process, who we’re including or leaving out. 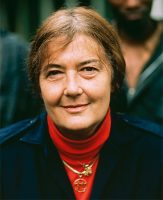 #includemorewomen watch: DIAN FOSSEY (1932-1985) was a foremost primatologist who discovered a tremendous amount about gorilla communication and heirerarchies, chronicling her time and work into her blockbuster 1983 book, Gorillas in the Mist.  According to Wikipedia, this book “remains the best-selling book about gorillas.”  It’s important to also note that while she made truly groundbreaking findings in her work with gorillas in the Congo and Rwanda, her purportedly racist treatment of the people of those countries is not something to be commended.  History is complicated, and it’s certainly important to take in the full picture of a person instead of only considering their highlights.  Let’s keep working at it!

Ok, off to board my flight to Amsterdam.  Tot ziens!  #happypride 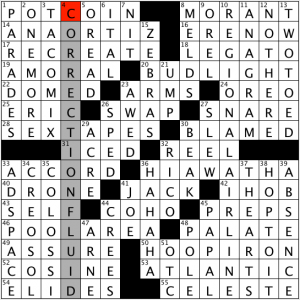 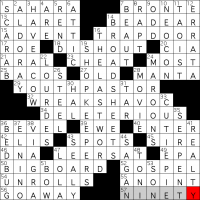 joon here with this week’s new yorker review. this was a relatively breezy themeless from patrick berry. the grid is constructed around 3×11 stacks across and down, interlocking in the center. of those, answers, i liked WREAKS HAVOC and THE LAST WORD (terrific clue on that one, {Prized part of a beef?}), while SHOPKEEPERS, BROADSHEETS, YOUTH PASTOR, and DELETERIOUS were just so-so. overall, though, the grid is quite pretty, with four-way (90°) symmetry instead of the usual 180°. as usual with a patrick berry puzzle, there is hardly anything to frown at in the grid—the “worst” entries are extremely familiar abbreviations like EPA, CIA, DNA.

that’s all for me. have a great monday!