“MP2 Players”? Are these the betas of mp3s? Not to my knowledge. No, no. Instead the title is hinting at the FACT that each of the themers (or major players in the grid) contains a pair of M-P bigrams. M ‘n’ P sequentially, two times—with no N-O between ’em. ;-) What makes this easy kind of theme work well, especially for more experienced solvers, is the quality and variety of those theme phrases. Today they’re spot on. My only complaint (if you can even call it that) is that the solve was so smooth that it felt like it ended too quickly. And perhaps that’s a good indicator of why this is such an attractive puzz for beginning solvers. Or more experienced ones who just need something easy ‘n’ breezy for an early summer-like day. The themers:

Two tasty edibles, one kid-lit classic and visions of “if-I-had-money-to-burn” make for a lively “MP2” theme set indeed. Only other long fill today comes to us through the potent (if laid-back-sounding) [SINGAPORE Sling (cocktail that’s served in a hurricane glass)] and the computer-centric USER NAMES [Log-in identifiers], conveniently located right beside [TECH support (computer help)] (and who sez there’s never help around when ya need it?). Seafaring literary hero HORATIO [Admiral Hornblower], cinema’s timeless SOPHIA Loren, the quaint and colorful EMPORIA [Large retail stores] and the viscerally-clued SWOONS [Goes weak in the knees] all contribute a fine array of mid-range fill. Ditto TRUISM, MUPPET and NACHOS. SPRAIN was clued as [Minor wrist injury]. Kinda wish it had been clued in conjunction with the ankle, just so it could pair up (well, in my mind anyway…) with “MY FOOT!” Love that this last one is clued ambiguously as [“Yeah, sure!”]. I.e., “LOVE TO!” is not the right response… (Along those tricky lines, [Person with convictions, perhaps] does not lead us to MODEL or IDEAL, but to FELON. Nice.)

And among your mp3s, you may have the soulful [“TRY A Little Tenderness”] (best Mondegreen scene with this song: Bull Durham—give the first 40 seconds a go); songs by ICE-T [Rapper with a cool sounding name] (pun certainly intended); rock ‘n’ roll doo-wop group [SHA Na Na]; or classic rock’s “LAYLA” [Eric Clapton hit]. Something for everyone.

And on that inclusive note, I’ll bow out for the day. Whatever extremes the weather may be putting you through, hope you’re staying warm enough/cool enough. Longest day/shortest night of the year comin’ up on Thursday. Happy summer, all—and keep solving! 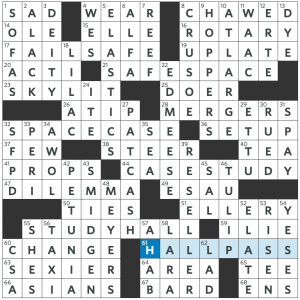 The word chain, a variation of the word ladder, is what we’ve got here, upgrading from FAIL to PASS.

Never heard of it, and now I know: [33a: Fairy of Persian myth]: PERI. The figure of the peri was popular among the Georgians and Victorians when they started mining Islamic and Persian folklore for their Orientalist fantasies; Gilbert and Sullivan’s Iolanthe (1882) is subtitled “The Peer and the Peri.”

My second favorite credits sequence of 1970s TV is from [56a: Shout heard on New York streets]: TAXI. 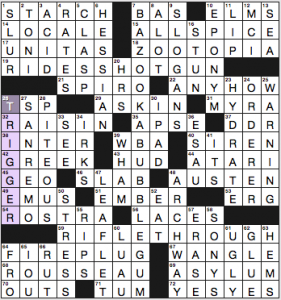 The theme might have played well before Aurora. That mass shooting was about 6 years ago. Ever since, there’s been an unending stream of gun massacres that make a gun theme rather unsavory—and then there’s the addition of the two-part revealer, TRIGGER / WARNING ([With 25-Down, caution before a potentially upsetting lecture … or a hint to 19- and 59-Across and 7-Down?]). Basically, this whole puzzle needed a content warning.

The other themers are RIDES SHOTGUN, BAZOOKA BUBBLE GUM, and RIFLE THROUGH—all perfectly fine entries unto themselves, but when you add the WARNING about the gun TRIGGER, as opposed to a warning about content that might stress some people (for example, discussion of abuse or violence—not just in academic lectures but also in written materials and social media posts) … well, it stops being fun. We’ve had two gun massacres in American high schools in the past four months, and assorted other smaller mass shootings and school shootings. America, you’re breaking my heart.

In other crossword news at the NYT, constructor Kameron Austin Collins was profiled in Deb Amlen’s “Who Made My Puzzle?” feature. He comments, “I’ve removed most gun references from my word list — I don’t know that I care so much about other people using them, as they’re a part of everyday life (and for reasons that aren’t strictly fatal). But I’m not that into them and didn’t feel like debating with myself over them every time they came up. Most urgently, the thought of inadvertently publishing a gun reference in the midst of national mourning over a fresh tragedy is pretty mortifying to me. You can’t control that kind of thing.” Thank you, Kameron. I hope other constructors follow suit.

There’s some nice fill in here, like ZOOTOPIA and Henri ROUSSEAU. There’s also some stuff that feels like a reach for newbies trying the Tuesday puzzle: APSE, DDR (which was just in another recent puzzle), ERG, TUM, SAN REMO. 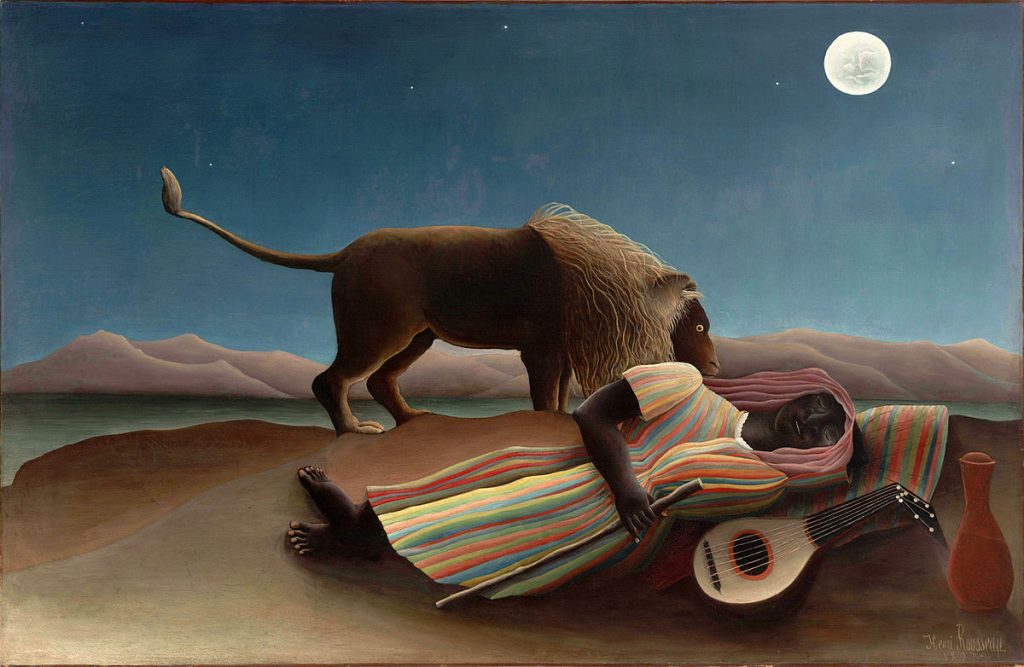 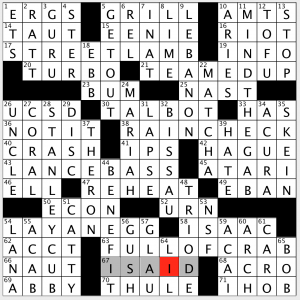 I got a very nice “a-ha!” moment with this puzzle today. I caught on pretty quickly to the gimmick of the Ps changing to Bs, but I didn’t get the current event significance of it until very end, where the revealer is!

Yes, I have eaten at an IHOP once in the past 10 years. Not great food, but they DO have good pancakes. It is just that they seem to have terrible service. In our area, unemployment is ridiculously low, so restaurants have a lot of trouble finding help. Applebee’s also is a restaurant that I have found has notoriously bad service across the board. But that isn’t a commentary about people that work there: it’s that there isn’t anyone around to work! They recently closed an Applebee’s near my house. Probably was a mistake to have opened it anyway, because we don’t need THREE Applebee’s within 15 minutes of my house! 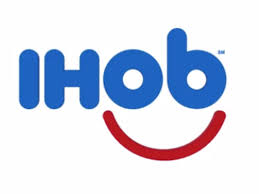 I forgot to set my timer, but this one went fairly quickly. My guess is 4ish minutes. I got plenty of sleep this weekend! 4.3 stars today.

Some notes, including a few obscure pop culture refs!

It’s nice and hot here. I am not complaining! At least it isn’t snowing! 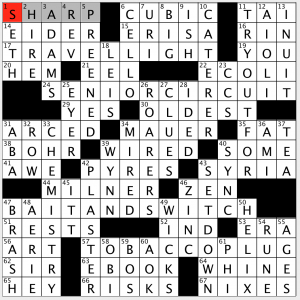 Is it Joe “Shoe” as the pronunciation? I don’t know this byline. Normally when I don’t know the constructor I struggle with the puzzle. Not the case with this one! As I mentioned in the Jonesin’ write-up, I had plenty of sleep! The revealer is in the middle, so you actually know what is going on halfway through the puzzle, but for some reason that didn’t make the other them answers any easier!

I work for an electrical contractor, and I actually start working for a DIFFERENT electrical contractor on July 2, so these terms (light, circuit, switch and plug) are all extremely familiar to me. Even though I am just the accountant! A solid 4.4 for a fun Tuesday puzzle.