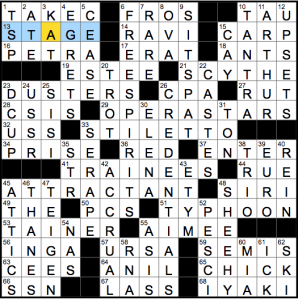 Cool concept today from Jeff Chen! It’s explained a little at 37a, ENTER [Key that moves the cursor to the next line … or a hint to answering five clues in this puzzle]. Five entries in this puzzle contain the word ENTER, except! The “ENTER” has been removed, and instead the second half of the entry begins on the line below, as if Jeff hit the ENTER key on a keyboard. Like so:

It’s a great bonus that ENTER is in the same spot in the grid that it would be on a standard keyboard (although the grid isn’t keyboard-shaped). Five lively theme entries, all using ENTER in a different way. CHICKEN TERIYAKI has to be my favorite, since it’s the only one that breaks ENTER up across two words. I flew through this one, but it put up a nice Thursdayish challenge!

Some nice long fill elsewhere in the grid, as you’d expect from Jeff: there’s FREE SPIRITS, SITS PAT, STILETTO, Chrissy TEIGEN, and OPERA STARS (with the lovely clue [Met people]). The usual dusting of crosswordese to hold the grid together, but nothing egregious in my book (maybe CSIS and ETYM?). Incredibly strange to see TON clued as [Style: Fr.]. There are plenty of ways to make TON hard without resorting to foreign languages, I think. I liked the cute SCYTHE clue [Wheat whacker].

That’s all I have on this one. Fun puzzle, worthy of the Thursday slot! Until next time!

I’m surprised my time was that fast, since I left a lot of blank squares on my first pass through the grid. There’s some fun stuff in this puzzle.

My blankness started at 1a [Spanish lollipop brand whose logo was designed by Salvador Dali]. After I circled back and got enough crossings to fill in CHUPACHUPS, I had a vague memory of having seen it before – so vague I have no idea where. This is the logo that shows up on a Google image search, and it doesn’t look all that Dali-esque to me. 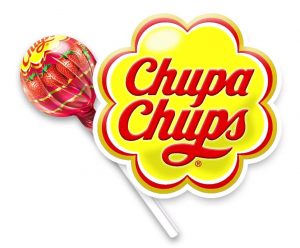 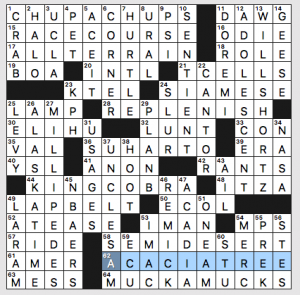 What I didn’t know before I did this puzzle: that an ACACIA TREE is called a “wattle” in Australia. 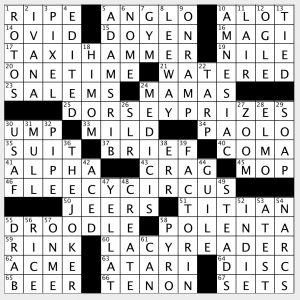 Hi folks–Evad in for Team Fiend member Jim today with hopes for a speedy recovery. Today’s WSJ puzzle is called “C+” and let’s see if it merits that rating. I’m not familiar with the work of this particular constructor, but I do see he gave us a puzzle in this same venue back in May. The theme idea here is not to just add the letter C to phrases but instead add the sound “cee,” spelled in many different ways, making the theme entries much more interesting to solve: 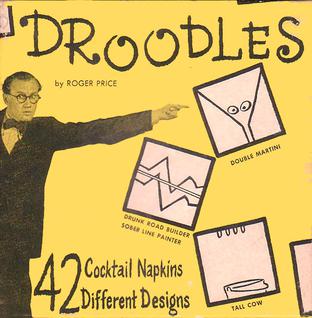 Fun theme, I’d rate the puzzle a strong A- instead of C+. I found the puzzle itself quite hard, especially since the theme technique involved adding different letters to each phrase. ROTOS harken back to an earlier time; it’s short for rotogravure or the technique of transferring images to paper. I’m also not familiar with DROODLES, or what the comedian Roger Price (another from the ’50s) called “a borkley-looking sort of drawing that doesn’t make any sense until you know the correct title.” (I’m not going into the rabbit hole to find out what “borkley” means) . Finally, I didn’t know that Venice gave us POLENTA; since it’s corn-based, I would’ve thought it came to us from Mexico. (And would’ve considered it among the many great things that have come to us across our southern border, just sayin’…) 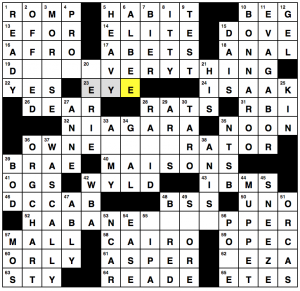 The theme of this week’s BEQ Thursday puzzle is pretty straightforward – it’s all in the title, “Skip Rope”.  This one’s not entirely theme entry driven, but here’s those three:

Each of these pieces of fill contains the word ROPE, and each set of crossing down clues skip the part of the theme entry where ROPE would appear.  Thus, “Skip Rope”.  Not the first time I’ve seen this sort of thing, but this is well-executed. 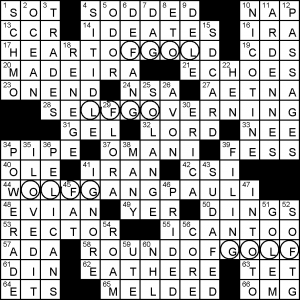 The letters of GOLF move around from FGOL to LFGO to OLFG to GOLF – so a ROUNDOFGOLF. Thursday is an odd day for one, for those not retired or in executive positions… The best thing in the theme entries was WOLFGANG in WOLFGANGPAULI, because that’s just a crazy first name. On the other hand, that’s the only one that’s buried in one word rather than spread across too. That’s really only a minor thing though. HEARTOFGOLD wasn’t clued that way, but I’m sure many of us either thought of Neil Young or Zaphod Beeblebrox…

The biggest issue with the theme was that 11/13/13/11 is somewhat difficult to design a grid around. This monstly kept itself together, except that area around SODDED/IDEATES/ETO/DELE, which is a lot of glue to chew on in one sitting. The top right and bottom left corners are less crowded, and we have SDCARD (a novel, and useful entry) on one side and POWERADE opposite. Personally find the NBA angle the least interesting way to clue PELICANS. Most of South Africa doesn’t have PELICANS, but the Cape Town area is home to the Great White Pelican, a beautiful massive flying behemoth. I did also appreciate singer [One-named “A Seat at the Table” singer], SOLANGE and a clue emphasizing her own achievements, even if she is the 21st century’s Erma Franklin.