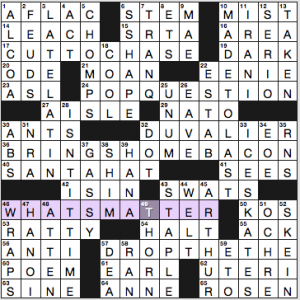 The revealer is “DROP THE ‘THE’,” [Sean Parker’s famous advice to Mark Zuckerberg in naming The Facebook … or a hint to 17-, 24-, 36- and 46-Across]. Each of those themers is made by removing THE from a familiar phrase:

I like the theme okay, though the revealer feels a bit dated. Would have felt more vibrant when The Social Network was in theaters.

The theme was smoother than the fill. When unusual LATE LATIN is in the grid, you probably don’t want Latina in the clue for SRTA. EENIE, IS IN, ACK, plural-we-rarely-actually-use UTERI, ALCOA, awkward ISN’T IT TIME (crossing IS IN, to boot), S-SHAPE, TRANQ, singular EAVE, ESTAB, ETO, IRANI, SERIO-, EOE, OCHRE … these triggered the Scowl-o-Meter.

3.25 stars from me. The theme needed better support, and perhaps the grid would have benefited from breaking up a pair of long Downs.

It’s hard to view this puzzle without comparing it to last Thursday’s NYT grid by David Steinberg and Milo Beckman which I felt was masterful. But let’s try to look at this on its own merits.

We’re given phrases that each start with a color. The revealer at 62a is clued [LGBTQ symbol celebrating its 40th anniversary hinted at by the starts of the starred answers]. The answer is of course FLAG. 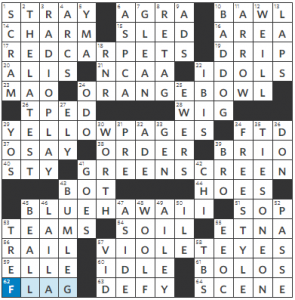 A fine set, but regarding the last entry, combining indigo and violet into purple would have been a reasonable alternative and would have given more options. 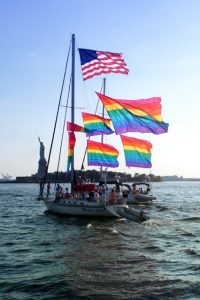 I was surprised to learn the rainbow FLAG has been a symbol of the LGBTQ movement for 40 years. I had no idea it was around that long. But according to Wikipedia, as a symbol, it goes back much further than that. The German reformer Thomas Müntzer used it to symbolize a new era and a new covenant with God in the 15th century. And “American Revolutionary War writer Thomas Paine had proposed that the rainbow flag be used as a maritime flag, to signify neutral ships in time of war.” Imagine that! A sea full of sailors flying the rainbow flag! Delicious!

It’s tough to fill a grid with six longish themers and a revealer, even if it is short. But we get lovely corners with THE LATEST, RADIO PLAY, FREESTYLE, TIES ONE ON, “BAD DOG,” and BUM LEG. The downside is that we also get ALIS, TPED, OSAY, YMA, ODO, YOS, and EEOC. In the end, I think they all cancel each other out.

One clue that got me was 43a [Computer-controlled game character]. In gamer parlance (at least when I was more active), the answer to this should be NPC (non-player character). The grid wants BOT which doesn’t feel right to me. A BOT is either an actual robot or a computer program that can run autonomously without human intervention. I don’t know that I’ve ever heard of a game character called a BOT, unless things have changed recently. 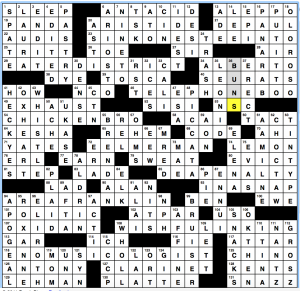 This week in AVCX land, the constructors (BEQ and Laura Braunstein) giveth, and “The Constructors Taketh Away”.  No, literally, that’s what’s going on here:

Sorry, forgot to add a space in the puzzle title – the constructors take TH away from each of the theme entries – SINK ONE’S TEETH INTO, THEATER DISTRICT, TELEPHONE BOOTH, CHICKEN BROTH, ETHEL MERMAL, DEATH PENALTY, ARETHA FRANKLIN, WISHFUL THINKING, and ETHNO-MUSICOLOGIST all get the same treatment.  This was a nice, meaty theme and I’m glad we got the expanded grid size for all of these entries.

While I liked the theme, there were a few patches of fill in the grid that I didn’t love as much, though that may have been part and parcel of this many theme entries spread throughout: 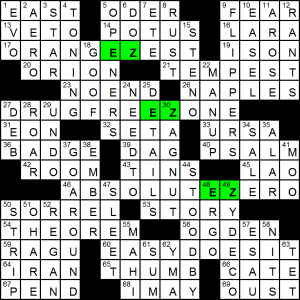 EASYDOESIT is the somewhat vague revealing answer in today’s puzzle. The bigram EZ is split between the two parts of three long across answers: ORANG(EZ)EST, DRUGFRE(EZ)ONE (guessing these signs are an American thing?) & ABSOLUT(EZ)ERO.

There aren’t a lot of showstoppers outside of the theme. SORREL was tricky for me, despite my profession, as those are CHESTNUTs here; apparently SORREL is a regional US thing. SORREL is a ubiquitous weed in my world. A crossword name I have trouble remembering was waiting at 1D – EVO Morales; not to be confused with IVO Andric or IVA Majoli…