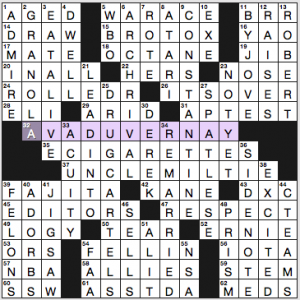 Hey! What’s this zippy Friday puzzle doing in the Saturday slot? I breezed through this one, with lots of entries I ADMIREd. There’s BROTOX, which is a slangy/snarky term I’d not encountered before. The ROLLED R in churro (did you know that churros are not just a Mexican thing? they’re big in Europe! not just in Spain, but also in the Netherlands). “IT’S OVER,” hon, sorry. Filmmaker AVA DUVERNAY. Your nicotine-laden E-CIGARETTES. Old UNCLE MILTIE Berle. EDITORS and RESPECT sharing a row. DRUG CARTELS and ARCHRIVAL, feels like that Sicario sequel in here. SPÄTLESE wine, “BY JOVE!”

The lowlight was that crossing of random Roman numeral DXC with C-TEAMS, which my sports-fan husband has blown the whistle on. Gotta call a penalty on this one.

4.25 stars from me. Here’s the Constantine trailer—it gives away a lot of the movie, though.

Shenk Pseudonym Watch: CASE E SMITH anagrams to CHASTISE ME, so maybe he’s owning up to all the pseudonyms? It also anagrams to TEACH EM SIS, which is what I shall proceed to do in this post. (Oh hi! It is I, Laura, back from hanging out with thirty thousand librarians in New Orleans. Yes, it was fun and I ate and drank well. Today I’m subbing for Jim; not that our readers pay attention to who blogs for whom.) 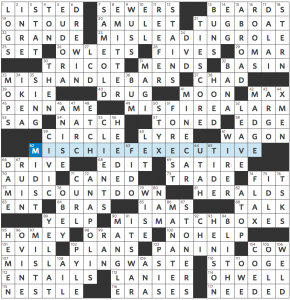 We got your standard “add a prefix to the front of phrases; wackiness ensues” type o’ theme here — in fact, CASE E SMITH also anagrams to SET EACH MIS or MIS TEACHES, which encapsulates the theme: 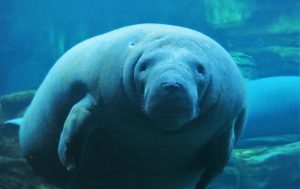 Fill note: I thought [86a: Denizen of Florida’s Crystal River] would be OCALAN or something crosswordese-y, but I was pleasantly surprised to find a MANATEE.

(Case E., if you are a real person, please accept my apologies for MIStaking you for granted.) 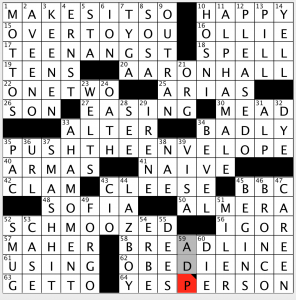 Is this just a constructor I don’t know or a pseudonym for someone? Seriously, I am asking, because if this IS a new name to this blog, this is quite a debut. I don’t solve every LAT puzzle, so perhaps there have been others by him. I think I have begun to take for granted the fact that I know, through various outlets, most every byline I see these days. It’s like when someone shows up at the ACPT for the first time and finishes in the top 20 and everybody is like “Who is this??” But realistically, I, in fact, do NOT know everyone, but Brian, nice to meet you!

This was a solid 72-word grid. I found the fill clean, perhaps explaining the fast solving time. Perhaps the World Cup has me in a good mood! 4.5 stars this morning. 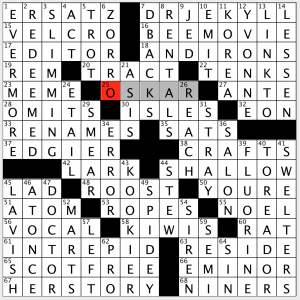 I finally broke 10 minutes! No, I don’t track my solving times, but this is easily a record time on a Stumper for me, by at least 2-3 minutes. There is not a single difficult term in here, which helps, and my theory of easier Stumpers near holidays is holding true! As a rule, also, “Lester” has slightly easier Stumpers. So that helps. But I will take it! And now I will likely be stupidly overconfident on the very next Stumper on July 7, even if I see a Longo or a Wilber byline! 4.3 stars today.