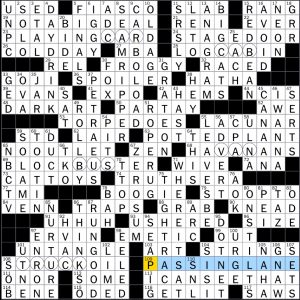 Laura here, in for Amy, who is continuing to celebrate graduation season. This evening I was, as the boys from Boston used to sing, taking my time, just movin’ along (speaking of Boston, registration for Boswords is now open! Hope to see you on July 29). Sam gives us a motor-vehicle-themed puzzle for a lazy Sunday drive, such that each themer crosses into the “left” lane next to the entry, around a motor vehicle (in the circled squares) and through the corresponding squares in the neighboring entry, to complete the clued phrase, et voilà:

I thought this was a lovely feat of technical achievement, fun to solve, and very satisfying once the gimmick clicked. Maybe the fill suffered just a bit; I got Naticked at the LACUNAR/SERTS (55a/47a) crossing and stared for maybe three minutes until I subbed an R for the L I had put there. Maaaaybe I would’ve edited 46d to [Sumerian name for Ishtar]: INANNA, 52a to [Spanish year {with a tilde, please}]: AÑO, and 47d to [Kinds]: SORTS. And we’ve got [19a: “It’s all good”]: NOT A BIG DEAL but also [87d: Enjoy consistent, favorable luck, in poker lingo]: RUN GOOD; I might’ve edited the 19a clue to [“No worries”]. Also, both [1d: Not using sensitive language, say]: UNPC and the themer clue [28a: Began a PC session]; even though the abbreviation PC stands for two different phrases (and ugh, UNPC as an entry does indeed [31a: Annoy, in a way]: GRATE ON me), it still seems like a dupe to me.

Meme-y colloquialisms having a conversation: SRSLY? BAH, GRR, SO LAME. THINK SO? [“Yer darn ___] TOOTIN! I WANNA PARTAY and DAY DRINK!! AOK, I CAN SEE THAT! UH HUH!

Ya think there are two turntables and a microphone at that [71a: Happenin’ Place]?

A timely puzzle, since the East Coast of the US is ratcheting up for a significant heat wave. The puzzle felt like a walk in very hot weather – slow and not all that pleasant. I didn’t figure out the theme until I got to the revealer, and then I kind of shrugged. The revealer is 115d [Coolers, briefly, that span two words in the nine longest answers] and it’s ACS. So the revealer is a three-letter abbreviation, which I’d prefer not to see in the puzzle at all. And each theme answer has the letters AC spanning two words. Okay. 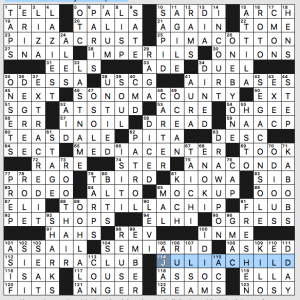 And there you have it. We also have ANACONDA at 75a but the AC doesn’t span two words.

What I didn’t know before I did this puzzle: that the NAACP was founded on the 100th anniversary of Lincoln’s birth. 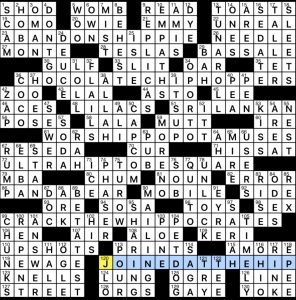 There’s a Wheel of Fortune “Before and After” vibe going on here, in which the letters HIP link two unrelated words or phrases.

Only five theme entries (plus the revealer) this week, but that includes two 20s, two 18s, and a 14. WORSHIPPOPOTAMUSES made me chuckle. A fun theme overall. 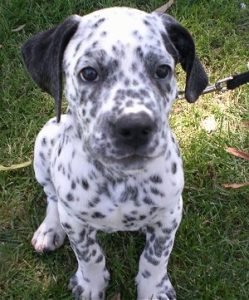 Picture of a bullmatian 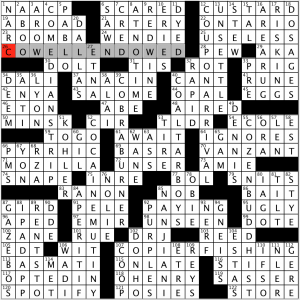 If I had to make a bet on which entry was the seed for this theme, I’d put my money on COCAINE MUTINY; I can just see BEQ flipping through channels, The Caine Mutiny (1954) is on TCM, hilarity ensues. This is a fairly standard theme-type, but it raises itself to a higher level in changing the meaning of the base phrase in each case; COAL TAR BOYS even alters the enumeration of the phrase. Also, it’s an interesting choice to rotate the standard grid 90 degrees and put the majority of the themers in the downs.

We’ve got a heat wave this weekend on the East Coast; stay cool! I’ll leave you with this clip from [85d: Comic Kumail]: NANJIANI, before he became known for Silicon Valley and The Big Sick: